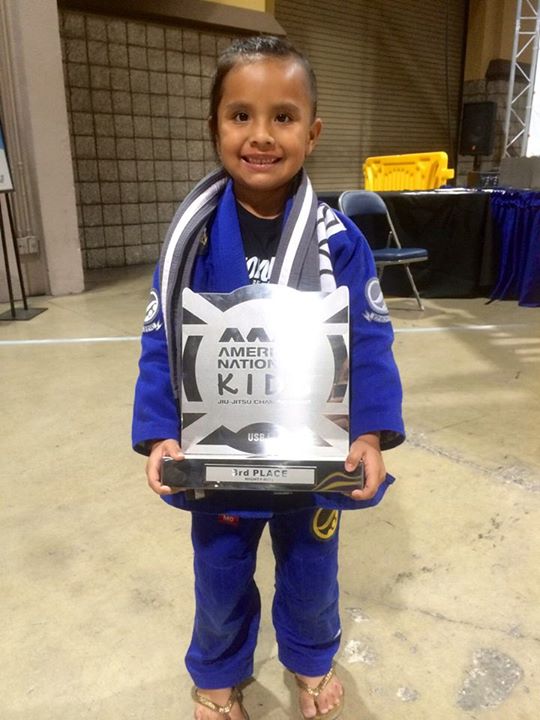 Osage places second in her division at National Jiu-Jitsu Championship

Mvhayv Cunningham’s favorite submission is the Americana, aka the figure-four arm lock, a move she uses frequently to take down her opponents in Jiu-Jitsu competitions.

Training since the age of 2, Mvhayv, pronounced Muh-hi-ya, returned from Los Angeles victorious where she competed in the National Jiu-Jitsu Championships. At five years old, she placed second in the Grey White Stripe division and her team, Might Mites for Triton Fight Center, placed second in the tournament. Triton Fight Center is located in Bixby. Her parents train there as well.

“I wish I could have brought home the shiny gold medal, but I’m happy I won a big trophy for my team, because they’re all proud of me!!” Mvhayv said of her win.

Just 43 inches tall, she trains two times a week and loves every minute of it, said her mother Brittnay. Her father, Wes, introduced the family to Jiu-Jitsu.

In 2008, while training for a Mixed Martial Arts career, he picked up Jiu-Jitsu along the way. Now he studies only Jiu-Jitsu and recruited his wife and daughter to join him. Brittany has a competition this month.

Jiu-Jitsu is a martial art, combat sport, and a self-defense system that focuses on grappling and especially ground fighting and was formed in 1882, according to Wikipedia.org. The concept is that a smaller, weaker person can successfully defend against a bigger, stronger assailant by using proper technique, leverage and most notably, taking the fight to the ground, and then applying joint-locks and chokeholds to defeat their opponent.

“Her biggest inspiration is her daddy. She says she’s going to be as strong as her daddy and beat him when she gets bigger,” Brittany said in an email. “She can’t take him down, YET, but that doesn’t stop her from trying!”

She holds several first, second and third place medals from various competitions, and she was awarded Female Kid Competitor of the Year by her coach Omar French in September. She usually trains twice a week, three times if her parents schedule allows it.

Mvhayv is Osage, Navajo and Creek and is of the Pawhuska In-Lon-Schka District. Her mother said she loves to dance and help the cooks at the camp set tables and whatever is needed of her. She is the only child to Wes and Brittany and the youngest of three grandchildren.