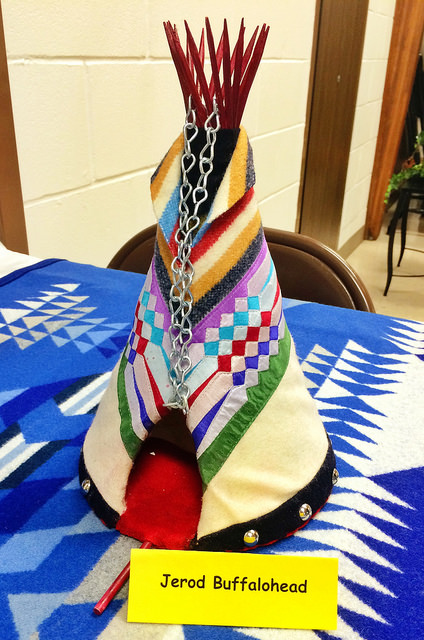 CASA fundraiser postponed till Dec. 20 due to low turnout

Rainy weather and a low turnout caused the CASA Birdhouse and Apron auction to be postponed until Dec. 20. The Osage Tribal Museum will host the event at 10:30 a.m.

Twenty birdhouses were donated for the event and two aprons. Fifteen sold for $2,710 before the organizers called it a night. Last year’s auction raised more than $6,000.

The Pawnee/Osage Court Appointed Special Advocates (CASA) program depends on fundraising for their offices and two-person staff. It also depends on volunteers and the CASA program is in “dire need” of volunteers, said Ron Wells, a CASA volunteer, along with his wife Linda.

“It’s a very rewarding job, it can be very time consuming,” Ron Holmes said. “We try to keep the families together in all our cases.”

CASA volunteers are assigned to abused and neglected Native American children in Osage and Pawnee counties and they operate within both county courts as well as the Osage and Pawnee tribal courts. CASA’s monitor the children’s living situations, school activities, and general well being. They report directly to the judges handling the children’s cases and act as an unbiased witness.

“A year ago the court called and they needed a Native foster home, they had five kids that needed to be placed ranging from the ages of five to five months, and since it was Labor Day weekend it was really hard to reach anyone,” Holmes said. “I called a lady who was already taking care of two foster children and asked her if she could maybe take two of the older children and we would have to place the other three younger children with someone else. She replied that she couldn’t take the older two children, but she could take all five.”

“When we see the children they are happy, they are well behaved, doing well in school,” said Linda Holmes. “This is a family with seven children, all under the age of six. They took them to Disneyland. We’re in dire need of foster families, Osage and Pawnee.

“All children deserve a safe home and to be loved.”

“We currently have 17 CASA volunteers, we had 20 last year,” Norris said.  “We really, really, need more volunteers because we had more people requesting CASA’s and we don’t have enough CASA’s to put on these cases but we have probably about 150 cases that we need CASA’s on.”

The Pawnee/Osage CASA is the only program in America that serves two tribal courts and two counties. There are two staff members and 17 volunteers. Norris has directed the program since 2009 and dedicates more than just her time. At the birdhouse auction she and her husband, Osage Congressman James Norris, spent more than $600 on birdhouses and this isn’t the first year they have done so. The second staff member, Nikki Revard Lorenzo, donates a lot of her time and money as well.

According to Norris, to prepare for state and tribal cases, CASA volunteers not only complete 30 hours of required training; they also have 10 additional training hours on Osage and Pawnee history and cultural customs.

Osage Nation Attorney General Jeff Jones, who was recently sworn in as the first Tribal Special Assistant U.S. Attorney, a first for any tribal attorney general in the United States, said when he goes to prosecute a tribal case the CASA report is very important.

“We always read the CASA report. It’s a very important report because they’re really a neutral party,” Jones said. “They have the time to go out and do some investigating and we really take stock in their reports over Indian Child Welfare and DHS.”

The Pawnee/Osage CASA office is one of four (CASA offices) in the United States that cross-trains CASA volunteers for both tribal and state cases. If a case begins in state court but moves to tribal court, the CASA volunteers stay on the case and vice versa if a tribal case transfers to state court jurisdiction. The CASA volunteer would keep a constant presence in transferred cases because state social workers handling cases transferred to tribal courts cannot follow the cases once they leave the jurisdiction.

Osage attorney and Pawnee Nation tribal judge, Terry Mason Moore, is the president of the Pawnee CASA Advisory board. She attends the CASA birdhouse auction every year and her artist husband Ted Moore and daughters always contribute beautifully painted birdhouses.

“All auction items are created and painted by artists, so if you win a bid, you take home a piece of art and help out a good cause,” Moore said in a post on the Osage News Facebook page. “If you can’t attend, you can make a tax deductible cash donation, the money goes to help our foster kids in the Osage and Pawnee County and Tribal Courts system.”