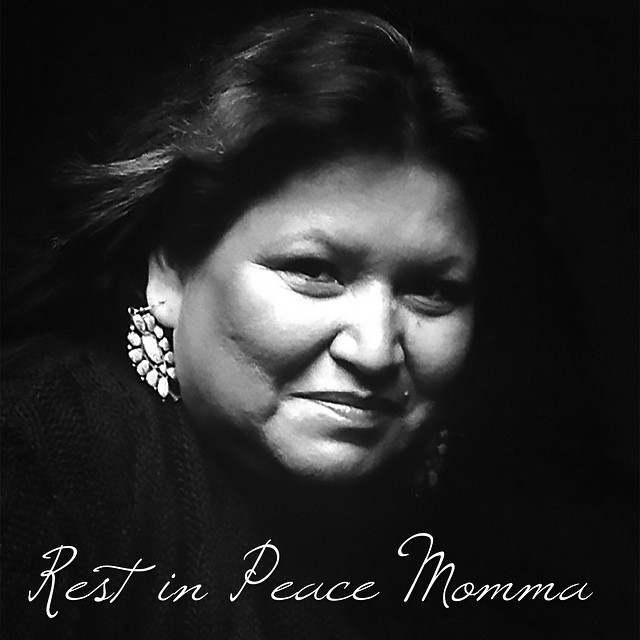 Renowned Osage artist Gina Gray, 60, passed peacefully away Saturday December 20, 2014 in her Indian Camp home In Pawhuska, Oklahoma. She was surrounded by family at the time of her passing.

Gina made her living as an artist and is considered a master among her peers and Native American art aficionados. Her work has been shown from Pawhuska to galleries all over the world. A winner of art contests in the most prestigious showings in Indian country, her work was noted for her fresh contemporary vision of the warrior and her monotype prints.

Gina owned galleries in Santa Fe and Tulsa showcasing her unique style of painting and monotypes. Her long career in art started at the Institute of American Indian Arts where she graduated from high school. She later studied at the prestigious California Institute of Arts where she studied as a commercial artist.

Her art is found in galleries and collections across the globe. She has work hanging in the palace of the Sultan of Brunei. Her long career also found her being asked to serve as a Commissioner from the Secretary of the Interior for the Indian Arts and Crafts Board in Washington D.C. for a four year term. She also counted winning the Southwest American Indian Art Association 70th Annual Santa Fe Indian Market Fellowship Award as a great honor. She was commissioned to provide the cover of the National Congress of American Indians History book cover and was a featured artist at museum showings at the Smithsonian Museum of the American Indian, among others. She had literally hundreds of showings all over the country.

One of her latest achievements was providing the book cover for a book about Osages titled “Bootheel Man” by author Morley Swingle.  Gina followed a family tradition of fighting for native rights when she hitchhiked from Santa Fe N.M. in the middle of winter of 1973 to the historic occupation of Wounded Knee in Pine Ridge South Dakota. She returned to her studies at IAIA after a month at Wounded Knee. Many programs were born after the occupation to the betterment of Indian country.

She is survived by her siblings Jacque Butler, Andrew Gray Jr., Mary Bighorse, Louis Gray, Margo Gray, (former Osage Chief) Jim R. Gray and Pat Tinker.  She has one daughter in law; Yanti Halleck. Gina is proceeded in death by her parents Andrew and Margaret Gray.

Gina will lie in state near her home on the Osage reservation in Pawhuska at the Wakon Iron Chapel.  There will be a Rosary Tuesday December 23 at 7 pm., Indian services are Wednesday December 24th at 8 a.m., and Catholic services will be at Immaculate Conception Church at 10 a.m. and gravesite services in Pawhuska Cemetery.  Cameron Pratt will officiate the Indian Services.