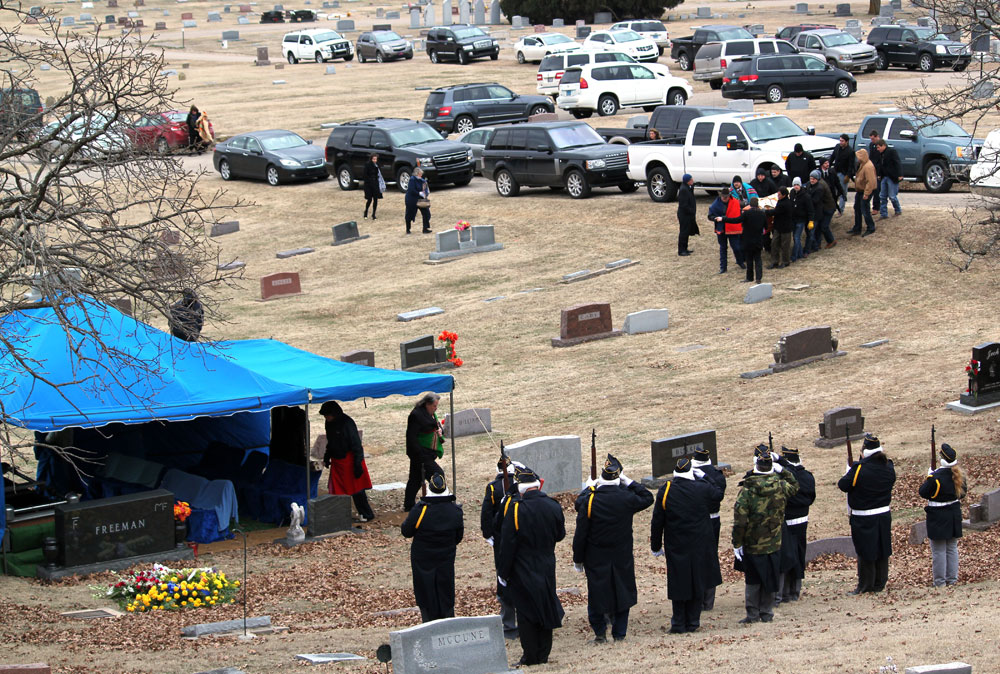 Heralded as one of the Osage Nation’s great leaders who helped forge a new form of government in 2006, he was laid to rest Jan. 7 at the Pawhuska City Cemetery.

He was buried in Osage tradition, at his request. An Osage service led by Eddy Red Eagle began the ceremony. His wife Eleanor, his children, stepchildren, grandchildren and great-grandchildren attended the ceremony in the Indian Camp Chapel in the Pawhuska Indian Village. Red Eagle spoke of his relationship with Freeman that went back to his father Ed Red Eagle Sr., who was also a great man.

“I knew Mark Freeman. I respected him, he respected me,” Red Eagle said. “He knew governors, senators, legislators; he had the same respect for everyone he met.”

Laid across Freeman’s casket was a Pendleton blanket, on top of that the American flag. His trademark cowboy hat rested on the top left corner of the casket lid. Red Eagle blessed Freeman with his eagle fan and said a short prayer.

He explained that since the sun rose that morning, his grandson Mark Freeman Jr. IV had followed all the steps to begin the process of healing for the family. He explained the blessings the family would receive from it as their patriarch made his journey. Red Eagle said Mark Freeman Jr., a devout Catholic, had come to understand Osage teachings, and as anyone learning and practicing a religion, he believed.

Red Eagle talked about Freeman’s prosperity, his intelligence and “formidableness.” Freeman was tall, well over six feet tall, and had served as a navigator while in the U.S. Air Corps.

According to his obituary, he attended the University of Oklahoma for one semester and enlisted in the United States Marine Air Corps in 1942 after hearing of the attack on Pearl Harbor.

He was enlisted as a U.S. Naval Air Cadet and in 1943 was commissioned as a 2nd Lieutenant and served as the personal navigator to General Nutsy Moore in the Pacific Theater, reaching the position of Executive Officer in the 2nd Marine Air Wing. He received his Pilots Wings in August of 1945 and held the rank of 1st Lieutenant. This year, the Hominy War Mothers honored him at their annual Veterans Day Dance.

“He was there, in critical war time,” Red Eagle said. “All of these experiences throughout his life shaped his essence.”

After the war Freeman rose to be one of the largest landowners in Osage County. His Freeman Ranch was arguably one of the most successful ranches in the state. Last  year he gave all 9,000 acres of his Freeman Ranch to the Nation. The largest gift the tribe has ever received. The gift went to the Osage Nation Foundation to administer and in turn they agreed to pay and run his funeral.

Once the Indian Service was over a Catholic mass followed at the Immaculate Conception Church. More than 30 people had attended the 8 a.m. Indian Service, mostly family, but more than 150 people attended the church service at 10 a.m.

Before his casket was placed at the front of the church, his grandson, Osage Congressman RJ Walker, read his obituary aloud.

Father Chris Daigle led the hour-long mass. Father Daigle said that Jerri Jean Branstetter, former Osage Congresswoman and now Editorial Board chair had committed to giving Freeman and his wife Eleanor communion for the past two years. She gave him communion for the last time on the day he died. Branstetter, who recently lost her sister Judy Barnes Hight to cancer, recognized Freeman’s frail state and called Father Daigle. Freeman’s family and children came in to be with him and Father Daigle administered his last rites. Freeman died nearly an hour after at 2 p.m. on Jan. 4.

Freeman was buried at the Pawhuska City Cemetery in 16-degree weather, his tombstone already standing, large and black granite with FREEMAN written on the back. He was buried with full military honors as the American Legion Post 198 pointed their rifles to the sky and fired three rounds and a bugler played taps. Everyone huddled close to hear Red Eagle’s final words for Freeman’s family.

One of the final steps of the ceremony is the meal afterward, in which Freeman had handpicked Osage cooks to prepare the feast. Twenty-three cooks from all three districts prepared dried corn, squash, meat gravy, chicken and dumplings, barbecue, turkey and dressing, frybread, green beans and assorted desserts.

The family gave away two yards of broadcloth blankets to each cook, red for the first daughters and blue for the second and third daughters, which is custom. They also gave away to people that helped them during the funeral and special people in Freeman’s life.

Red Eagle spoke of the blessings to come that would bring clarity to his wife and family. The men who administered the cedar for the meal would be going to bless the Freeman’s home as one of the last steps of the ceremony.

“The healing began when the sun rose,” Red Eagle said. “When the sun broke, his grandson opened his casket, and the sun then fell on him [Freeman]. The Morning Prayer starts the day, the fire was started, prayed over … the food has been prayed over.