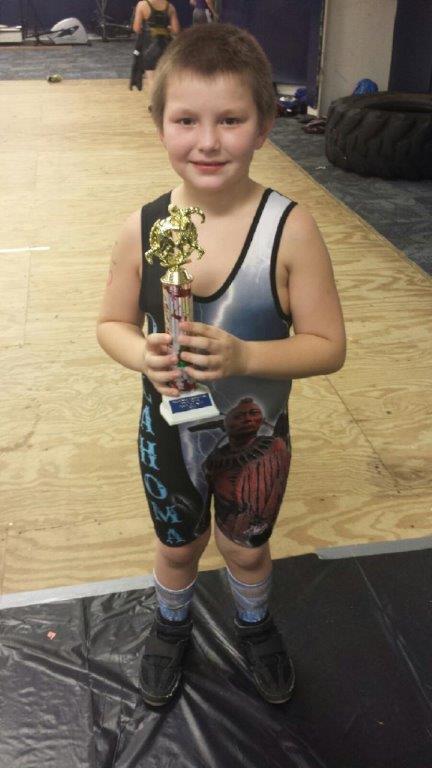 Wrestling isn’t just for the big boys it is also for small competitors too. Elijah Waller-Gilley, an eight year old from Hominy, is headed to Oklahoma Kids Wrestling Association Novice State Championship Jan. 30-31.

A first-year wrestler who wrestles for the Cleveland Takedown Club for the Oklahoma Kids Wrestling Association, Waller-Gilley has placed in every tournament he has participated in and recently placed fourth at Tulsa National’s for his division.

“Elijah is a straight A student and manages to juggle practice and schoolwork like a champ, we are super proud of him,” said Hope Waller, Elijah’s proud mother.

He has wrestled in tournaments every other weekend since September 2014 and he has practices three nights a week. Waller-Gilley has had around 20 to 30 matches and has had numerous “pins.” He wrestles at 90 pounds in Division II.

Gilley is the son of Hope Waller and Ronnie Gilley and the grandson of Osage Minerals Council member Everett Waller and Marian Waller. His paternal grandparents are Ronnie Sr. and Mary Gilley, all of Hominy.