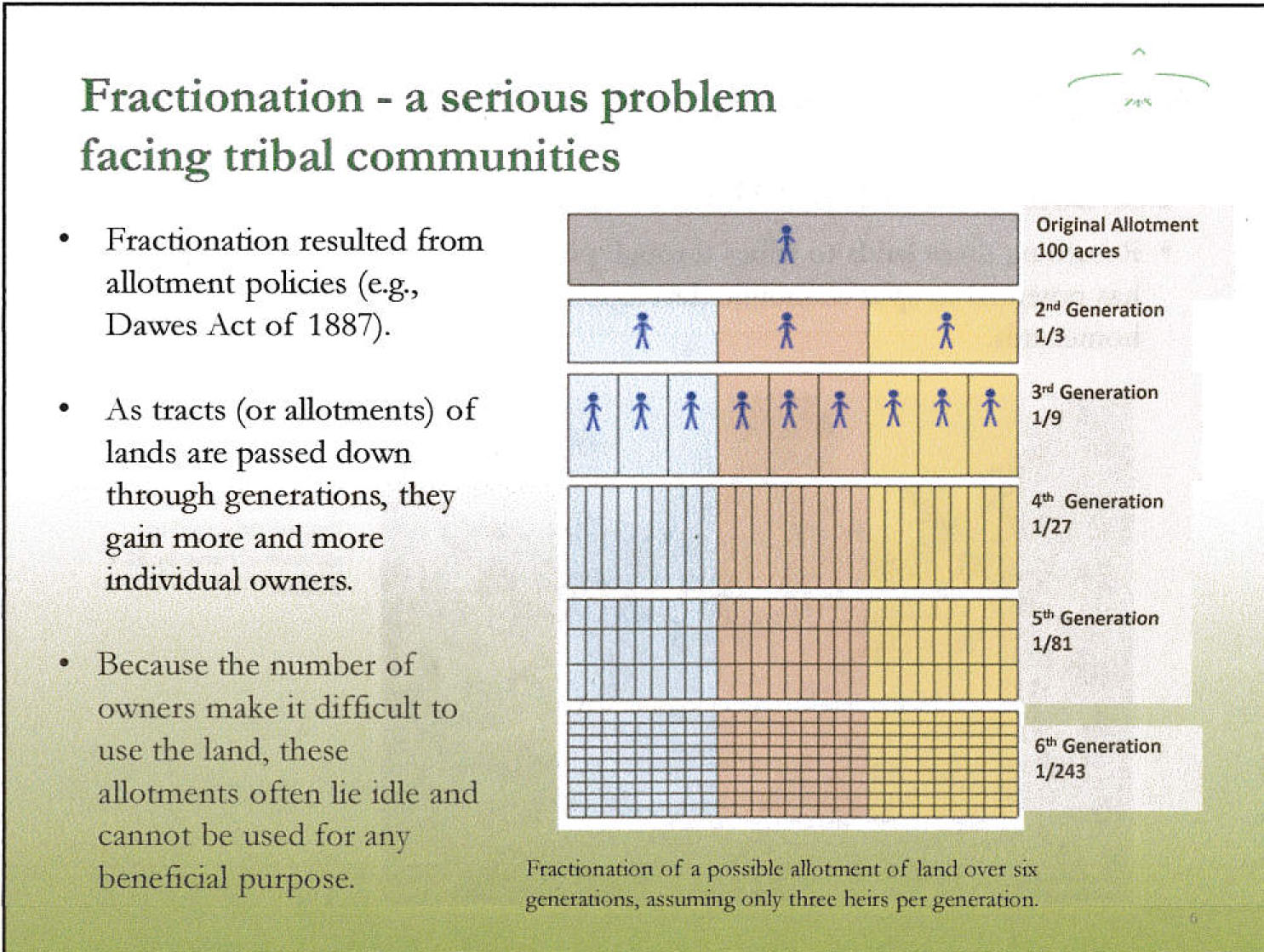 The Land Buy-Back Program for Tribal Nations has come to the Osage and the federal government is proposing $7.4 million to buy back fractionated land interest from individual tribal members.

According to Bruce Cass, tribal development and land acquisition director, who is working with Osage attorney Terry Mason Moore on the project, said there is roughly 64,000 acres with 680-690 individual landowners the Nation will be contacting about the program.

Those eligible for the buy-back program are individuals who own an interest in a parcel of land with multiple owners. There must also be a clear land title, and all estates in probate will not receive offers. The BIA has already been working to identify those individuals eligible for offers, Cass said. A majority of the fractionated land lies in the southern part of Osage County.

“What we want to do is use this opportunity of the Cobell buy-back program to identify what’s [available land] out there and to use whatever money we can within the buy-back program guidelines to make the purchases,” said Principal Chief Geoffrey Standing Bear. “Then we’ll approach our [Osage] congress and say here’s the other two-thirds, and we would like to buy these as well. It’s all dependent on people wanting to accept the appraised price.”

The Office of Appraisal Service for the buy-back program will be on site and performing appraisals to determine fair market value, as well as land appraisers from the Osage BIA Agency, Cass said. The Nation is planning on sending offers to tribal members by mid to late summer. The program could take 18 months to two years to implement from the initial date of signing the cooperative agreement for the buy-back program.

The cooperative agreement with the U.S. Department of Interior will detail how the Nation will implement the program and what resources will be used for outreach and education. The Nation will have temporary full time staffers to coordinate mail outs, social media, advertisements and community meetings, Cass said.

Rodman said the Crow Nation and Sisseton Wahpeton Oyate reached the cap on the money given to them within the 45-day window of the first wave because of the high response from tribal members.

The Cobell settlement provided $1.9 billion to purchase fractional interests in trust or restricted land from willing sellers at fair market value within a 10-year period, according to a DOI release. Consolidated interests are immediately restored to tribal trust ownership for uses benefiting the reservation community and tribal members.

There are approximately 245,000 owners of nearly three million fractional interests, spanning 150 Indian reservations, who are eligible to participate in the buy-back program, according to the release.

Sales of undivided land interests will also result in up to $60 million in contributions to the Cobell Education Scholarship Fund. This is in addition to the amounts paid to individual sellers, so it does not reduce the amount landowners receive for their interests. Already, the DOI has transferred more than $4.5 million to the Denver-based American Indian College Fund, which administers the fund with 20 percent directed to the American Indian Graduate Center in Albuquerque, N.M. Initial scholarships are expected to be awarded in 2015.

Fractionated land interest is when an undivided parcel of land has more than one owner and they all own the land together. In worst-case scenarios an undivided parcel of land could have up to 50 owners, as a result of the probate process of allotted land left to heirs. The original parcel of allotted land given by the government to 2,228 individual Osages in 1906 was 657 acres, roughly 1.5 million. A century later a majority of the land is in the hands of non-Osages.

“Lawyers and land men know that Indian lands are not being used to the highest and best use because of fractionated interest. We can’t get decisions on what’s the highest and best use of our lands and that’s been the problem for 100 years and it’s getting worse,” Standing Bear said. “This doesn’t apply to our three villages, because those aren’t individually owned. It only applies to our allotted lands, where they’re individually owned.”

When a parcel of land is heavily fractionated among heirs, it can become nearly impossible to do anything with the land if all owners can’t be found because all owners have to agree on its use according to land law, Standing Bear said.

Cass said non-Indians have found a way to obtain Osage land by buying the interest of an individual and then offering the same amount to other interest holders of the same land. He said it’s hard to turn down cash when you’re struggling.

“That’s how you buy land in the Osage. You find an Indian with land with fractionated interest, you find a way to weasel in and jump in on one little fraction and you force everybody out. It’s called Partition,” Standing Bear said. “It’s how a lot of ranches got built in Osage County.”

Standing Bear said the process is allowed by Oklahoma law and supported by the BIA Osage Agency. Anyone can go to the Osage Agency and go through the process of getting an Osage’s undivided interest taken out of restriction and purchase it. But, the non-Indian can’t make decisions on the use of the land because they’re just one of many who own the undivided interest. However, the non-Indian can petition the court to divide the land, in kind, in equal shares.

If the court cannot divide the land completely and equally, “which they never can” Standing Bear said, the law says the parcel of land must go up for auction. Oklahoma law says the land must be appraised and “what they do is they get it appraised as low as possible.” Once the land is appraised the non-Indian gives notice to the Osage Agency and it is bid out for two-thirds of the appraised value.

“So if you come in and give them an appraisal at two-thirds of what others would be, and then you bid at two-thirds the appraised price, you can go ahead and force to buy out interests at half price,” Standing Bear said. “That’s the law and the BIA approves it every single time. And I, for years, screamed about how low our appraisals were at Osage.”

He gave an example of his grandmother’s land when he was first beginning his career as an attorney. The lease appraisal value of land surrounding hers was appraised at $12.50 an acre, but when the BIA came to appraise her land, they appraised it for $4.50 an acre. When he asked her to protest she simply said the BIA appraised it as such so that’s what it must be worth. To always trust the BIA was the mindset in those days, he said.

“What do you tell an Osage who needs the money, who’s trying to pay for their child to go to college, what do you tell them?” Standing Bear said. “It’s just the system is screwed up. The only way out of it is for us to control the land.”

For more information on the Buy-Back program call the Trust Beneficiary Call Center at 1-888-678-6836 or visit www.doi.gov/buybackprogram