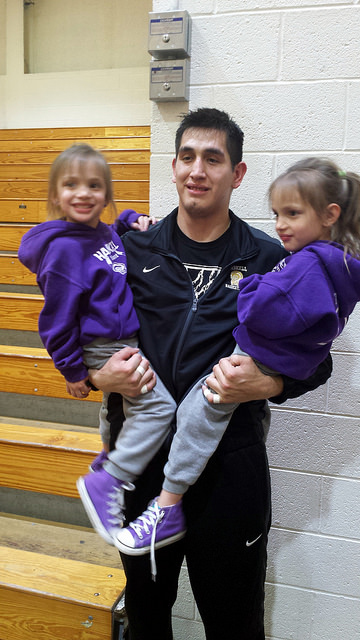 Basketball is mainstay in soldier’s life before and after war

Chris Turley has lived a full life in just 26 years. Wounded in Afghanistan from shrapnel, to making a full recovery after doctors said he wouldn’t, becoming a father to twin girls – he now adds college student and college basketball player to his titles.

Turley has had a love for basketball since he was a young child, he said. His older brother Michael Bigheart taught him how to play, teaching him the basic fundamentals, which he practiced by himself on the Indian Camp basketball court. He now plays small forward for Haskell Indian Nations University in Lawrence, Kans.

“I love playing for Haskell, it is a rich traditional environment. There is a great history here with Native American athletes and it is a very positive place to be,” he said.

An Osage tribal member who graduated from Pawhuska High School in 2007, Turley had many opportunities to play basketball or football in college upon graduation. Instead, he chose to serve his country. However, attending college was always in his future.

“I love my family, my tribe and country,” Turley said.

“Basketball to me is a therapeutic sense of feeling, it is an escape from reality,” he said. “When you’re in the zone, there is no other problems in the world other than the ones you create for your opponent.”

Turley is majoring in Health Sports and Exercise Science and he is also in the Recruit Officers Training course at Kansas University. His hopes to become an Officer and basketball coach by the time his daughters are old enough to play the sport. Turley hopes the Indians make it to the National Tournament.

In the summer of 2007 Turley enlisted into the United States Army. He was stationed with the 101st Airborne Division in Fort Campbell in Kentucky and assigned as a Sr. Scout Observer with a Scout Recon/Scout Sniper Platoon. He also played basketball at Fort Campbell, playing on the company battalion and brigade basketball teams.

In 2010, Turley was deployed to Afghanistan as part of scout sniper/scout recon platoon called Hades Element. Their mission was to locate and kill or capture any known insurgents or military aged males within their battle space. A mission that was to only be a 48-hour mission in an area deemed extremely hostile, his platoon came under heavy gun fire and shrapnel injured Turley from an RPG explosion (rocket propelled grenade). Turley received a Purple Heart and a Combat Infantry badge, along with several achievement medallions for his time in the army.

The shrapnel destroyed his knee’s tendon, he said, and he had to undergo surgery to remove the shrapnel and repair the damage to his knee. The process was long and hard. Initially, doctors told him he might not run again, or play basketball. Turley was devastated.

Thirteen months of rehabilitation later, he was able to run again.

The day his Army service was complete, Turley enlisted in the Oklahoma National Guard and is currently stationed in Ponca City with the Delta Company 1st Battalion 179th Infantry regiment. He has drill one weekend a month.

The Indians are currently in midseason conference play and on Jan. 20 the Indians played against Oklahoma Wesleyan University in Bartlesville, 25 minutes east of Pawhuska. The stadium was full and Osages filled up Haskell’s visitor’s side, yelling and cheering for Turley when he entered the game. Written on each side of his shoes were the names Emmalyn and Adalyn, the names of his twin daughters. The girls were there to watch him play.

After the game the Osage spectators came down to shake his hand, congratulate him and wish him well.

“I have had the pleasure of knowing Chris for nearly his entire life; he is a young man of excellent character and representative of our Wah-Zha-Zhi people,” said Raymond Lasley. “As a Haskell Alumni I went to show my support for the Haskell team and Chris. Wah-Zha-Zhi young people have been attending Haskell since its inception. Chris follows in that tradition of Wah-Zha-Zhi and Native American athletes and scholars who have attended the trade school, junior college or University that is Haskell Indian Nations University today.”

Haskell Indians Head Coach, Chad Killscrow, who has been head coach for five years and also graduated from Pawhuska High School, said Turley came as a walk-on to the team and he took him on mainly for his size. Turley stands 6’2 and is 210 pounds.

“With his good work ethic, he proved himself and made it onto the roster,” Killscrow said. “Chris brings a lot more to the table other than just being a good player, he brings a positive attitude and discipline that rubs off on the rest of the team and that makes us a better team.”

The Haskell Indian basketball schedule is online and games are available for livestreaming and downloading at www.haskellathletics.com.