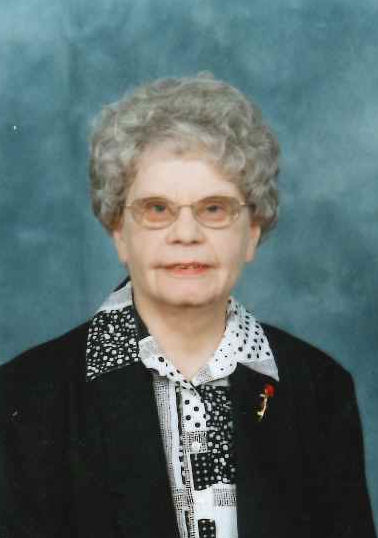 Betty Maud Trumbly was born Dec. 20, 1924 to Oliver William and Mary Frances Cornett Trumbly in Diamond, Mo. The family moved to Osage County, Okla. They later moved to Stillwater where she graduated from high school and attended Oklahoma A & M. She worked for the Oklahoma Welfare Department in Payne County for seven years before moving to Ponca City where she worked 33 years for Conoco, retiring as an Administrative Assistant. She then moved to Spanish Cove Retirement Center in Yukon, Okla., where she lived happily and content for 24 years. While living in Ponca City, Betty was a volunteer at St. Mary’s Hospital and crocheted dozens of newborn baby caps. She was an avid reader, worked crossword puzzles, and played cards, especially canasta. She did museum quality needlepoint and crewel embroidery and often traveled. She always said the two best decisions she ever made were going to work for Conoco and moving to Spanish Cove where she lived 24 happy and contented years. The staff there became her extended family. Betty and her family appreciated Rita Bauman who served as her Eucharist Minister for 13 years when she became unable to attend church. She was preceded in death by her parents, eight brothers and two sisters. She is survived by her sister-in-law Ann Trumbly of Oklahoma City and her nieces and nephews. A Mass of Christian Burial was held at St. John Nepomuk Catholic Church in Yukon, Okla., Jan. 29, 2015. The burial was at St. Mary’s Cemetery in Ponca City, Okla. Donations may be made to the charity of your choice. Services were under the direction of Smith & Turner Mortuary, Yukon.