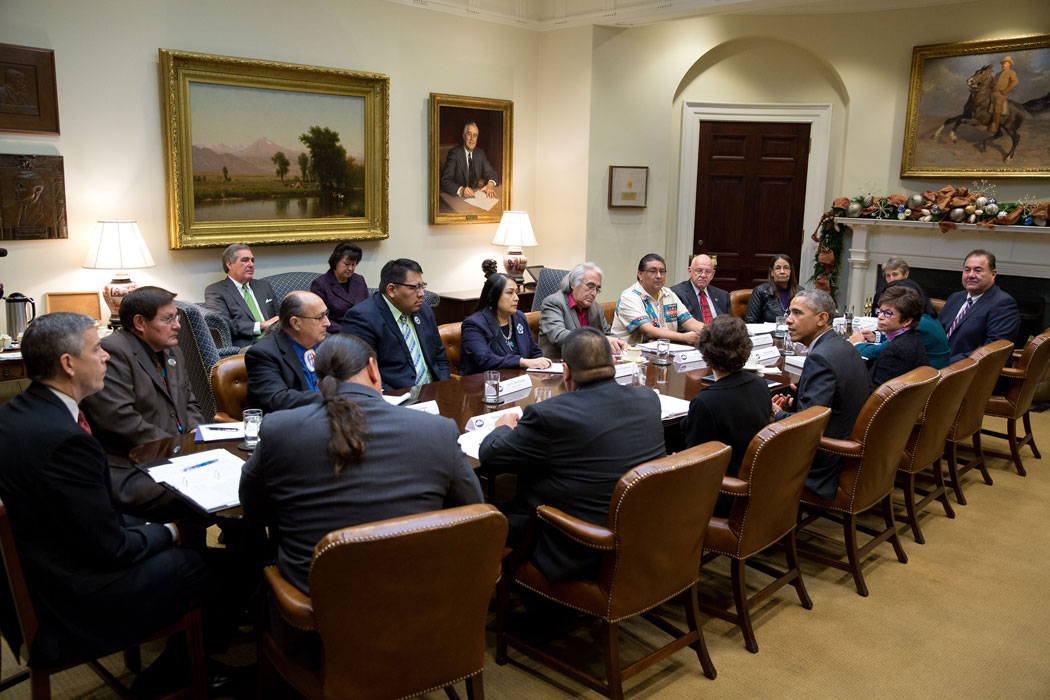 The most impressive thing Principal Chief Geoffrey Standing Bear witnessed during his meeting with President Barack Obama was not the man himself, but the work and staff organization it took to be the president of the United States.

Standing Bear was invited to meet with Obama, along with 10 other tribal leaders, at the White House on Dec. 2, a day before the annual White House Tribal Nations Conference on Dec. 3. The tribal leaders were given a 40-minute meeting with the president to discuss issues facing their respective tribes and nations.

“He’s a tall guy, really thin. He’s got kind eyes and when he came out and dealt with us and sat there, he just seemed like a regular person and seemed like he just did on TV,” Standing Bear said. “People I have known who knew Bill Clinton, said that when they were in a room with him, there was an aura of power. There is not an aura of power with Barack Obama, he is very personable.

“He’s almost like someone you would meet. He’s very smart, and he is very organized. He had four people behind him sitting back against the wall taking notes of everything that happened.”

Ten days before Standing Bear was to leave for Washington, D.C., for the tribal nations conference, a White House staffer called him and asked him to be in the meeting on Dec. 2. He said yes and arrived in Washington on Dec. 1. That evening the tribal leaders were briefed by telephone conference and were told they would each have a few minutes to say something to the president and the meeting would only last for 40 minutes. The issues the president wanted to focus on were education and health, especially for youth.

The morning of Dec. 2, Standing Bear and other tribal leaders arrived at 8:30 a.m. for their 11 a.m. meeting and went through four levels of security before being led to the West Wing. Their cell phones were shut off and taken away and they were seated in the Roosevelt room, directly across from the Oval Office.

“The whole place is not that big and the Roosevelt Room has a conference table in it and we sat in there and visited with the Secretary of the Interior and the Secretary of Education and the White House staff Native American team, lead by Jodi Gillette,” Standing Bear said. “We were there for about 40-45 minutes talking about issues with them.”

“The wall behind me opens and I knew it was the president because everyone started to stand up,” Standing Bear said. “I stood up and looked to my right, and he was right there. I shook his hand and said, ‘Hello Mr. President, I’m Geoffrey Standing Bear and I’m chief of the Osage Nation.’ He said, ‘Hello, Geoff.’ Then went around the room and everyone made their introductions.

“When Obama sat down he had a diagram, notes, two sets of notes. The guy is thoroughly briefed. He has top-notch staff. That was impressive.”

Standing Bear said the first tribal leader to ask a question was Cristina Danforth, Chairwoman of the Oneida Nation of Wisconsin. She asked about gaining broadband access for tribal members living outside of Greenbay, Wis., which was a major problem for her people.

Next was Darrin Old Coyote, Chairman of the Crow Nation, in which Obama is an adopted member. Old Coyote said the Crow Nation needs new markets for their coal and that tribes in North Dakota were receiving help from the federal government in doing oil production. Standing Bear said the president said that fossil fuels are not the future and everyone needs to look to alternative energy sources.

Standing Bear was last to speak with Obama. He said the president looked at him and said he needed to be quick because he had to meet with the Secretary of Defense after their meeting.

“I asked him, how are you going to make sure the initiatives you have put in place are going to last in the next administration? They all stopped and looked at me and he said that is something they are working on now. They are trying to institutionalize some of their initiatives,” Standing Bear said. “They’re going to institutionalize them through executive orders and if the next president wants to reverse them they would have to issue an executive order to reverse them.”

Standing Bear said, “I want to compliment you on appointing Justice Sonia Sotomayor. I had the privilege of meeting her in Oklahoma City and she understands the relationship between the tribes and treaties. She gets it; she understands our relationships with the federal government are based on treaties. But she informed us that the power to work with Indians come from Congress, that’s the majority of what the Supreme Court believes.

“If you get the opportunity to appoint someone in the Supreme Court, your advisers should be able to ask them how they understand treaties with Native Americans, appoint someone like Sonia Sotomayor.”

After the meeting Standing Bear said he had lunch with Washburn and they discussed the Donelson case, the wind farm issue, and the environmental assessments and the NEPA applications for permitting to drill in the Osage, and the slowing down of new oil production in the Osage.

“He said talk to BIA Director Mike Black. I said, I don’t know Mr. Black but I certainly will,” Standing Bear said. “When I got back to Oklahoma Mr. Black had already scheduled a meeting with the Osage Minerals Council. My administration is not informed from the Minerals Council on what they do. In fact, my representative for information, Danielle Cass, was asked to leave an executive session. That’s just how they choose to do it.”

Also present for the tribal leaders meeting were: