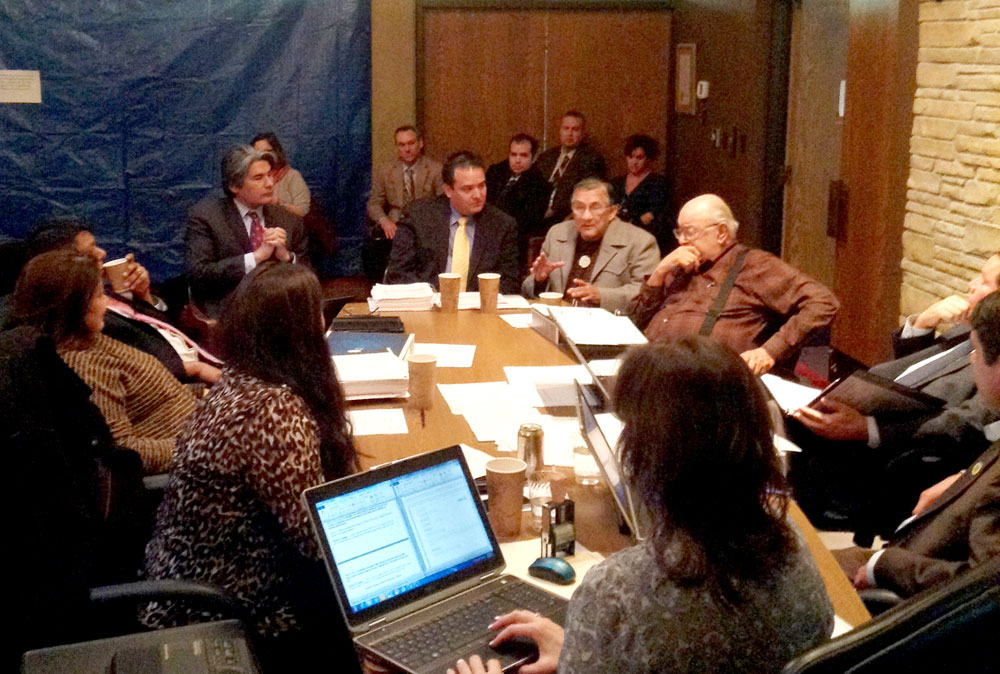 TULSA, Okla. – The atmosphere among the Osage Nation Gaming Enterprise Board and Osage Casino management is upbeat following the January Congressional Special Session, which included approval of the Nation’s annual gaming plan of operation.

On Jan. 15, the Fourth ON Congress unanimously passed a resolution (ONCR 15-05 sponsored by Congressman John Maker) to support the 2015 fiscal year annual plan of operation prepared by the gaming board. Principal Chief Geoffrey Standing Bear also signed the resolution supporting it.

That means gaming officials may proceed with FY 2015 plans, which include expansion plans for a larger Tulsa Osage Casino property in the conceptual design phase. The annual gaming plan requires Congressional consideration and action, but this year’s plan was delayed amid recent casino management changes and the appointment of new gaming board members as well.

Gaming board Chairman Mark Simms thanked the board and casino officials for their efforts in preparing the annual plan for the Congress during the board’s Jan. 21 meeting.

“We’ve had a lot of obstacles we’ve had to overcome and we did it very, very well,” Simms said. “As far as the board’s perspective, we couldn’t have done it without you, you made us look good… and now we’re moving forward, we got a vote from the Congress with a 12-0, this was just astronomical in my opinion.”

During her special session address, Congressional Speaker Maria Whitehorn describes the gaming annual plan as: “Our link into our operation that we get to see what (Osage Nation gaming officials) are going to do with the Osage people’s money, grow our enterprise, grow our business and it’s the one time of year this body takes a look into that to see how our funds, how our revenue … comes to us.”

Considered confidential due to proprietary information, the gaming annual plan is “a means of ensuring fiscal and operational accountability,” according to Osage gaming law. The annual plan includes information on the Nation’s seven-casino finances including budgets, reports and expansion plans, therefore much of discussion regarding the annual plan is usually held in executive session with the Congress and its respective committee.

Despite the confidential nature of the plan to remain competitive with other gaming tribes, some details have been publicly discussed – in general – including the plans for a larger flagship Osage Casino in Tulsa.

Osage Casino CEO Byron Bighorse told the Congressional Commerce and Economic Development Committee (which has initial jurisdiction on gaming and business matters) the proposed Tulsa casino plans are scaled down from an initial plan that proposed a $408 million property under the management of former CEO Neil Cornelius.

“What we’ve done is gone back, pared it down,” Bighorse told the committee on Dec. 12. “We feel that this proposed concept is the best business decision we can afford, we have several options – I don’t want to present this as ‘this is the only thing we can do’ – this (concept) has many options.”

Chief Standing Bear chatted with Osages in the “Osage Community for Responsible Citizenry” Facebook group on Jan. 24 and said the initial proposed Tulsa project was $455 million before it was trimmed by $50 million – and now it’s trimmed to “a more reasonable $240 million and we still are taking every measure to make sure we build and operate within a profit window with a guarantee of funding distribution to Osage Nation. That means investing cash and borrowing.”

Also included with the gaming annual plan is an increase of $6 million in gaming revenue distribution to the ON government for its operations. The Nation has received about $40 million annually in recent years, but the additional $6 million was proposed in a resolution (ONCR 14-16) sponsored by Congresswoman Alice Buffalohead last year.

Passed unanimously by Congress during the Tzi-Zho Session, ONCR 14-16 is a request to the gaming board to distribute a total of $46 million to the ON government for FY 2015. The resolution states that $5 million would be used for master campus plan debt retirement and $1 million toward a real property purchase fund.

“It’s my intent that this money be used toward paying off and helping to pay off faster the master plan,” Buffalohead said in September during the Tzi-Zho Session. Since the resolution was a request for the additional money, the gaming board was not legally bound to comply, but the current gaming board approved the $46 million distribution with the first monthly check approved at the Jan. 21 gaming board meeting.

The Nation receives its gaming revenue distribution monthly following approval by the gaming board during its regular meetings. The $46 million figure will be divided up into monthly checks of $3,833,333.33. Also on Jan. 21, the gaming board voted unanimously to distribute $1.5 million to the Nation for arrears distribution to cover the months of October-December 2014.

Congressman Maker, the ONCR 15-05 sponsor, said he is pleased with the 12-0 vote to approve the gaming plan. “I think everything’s been discussed and I thank everyone for being a big help,” he said, adding he’s looking forward to the Nation starting one of the biggest projects in the tribe’s history with the Tulsa casino.