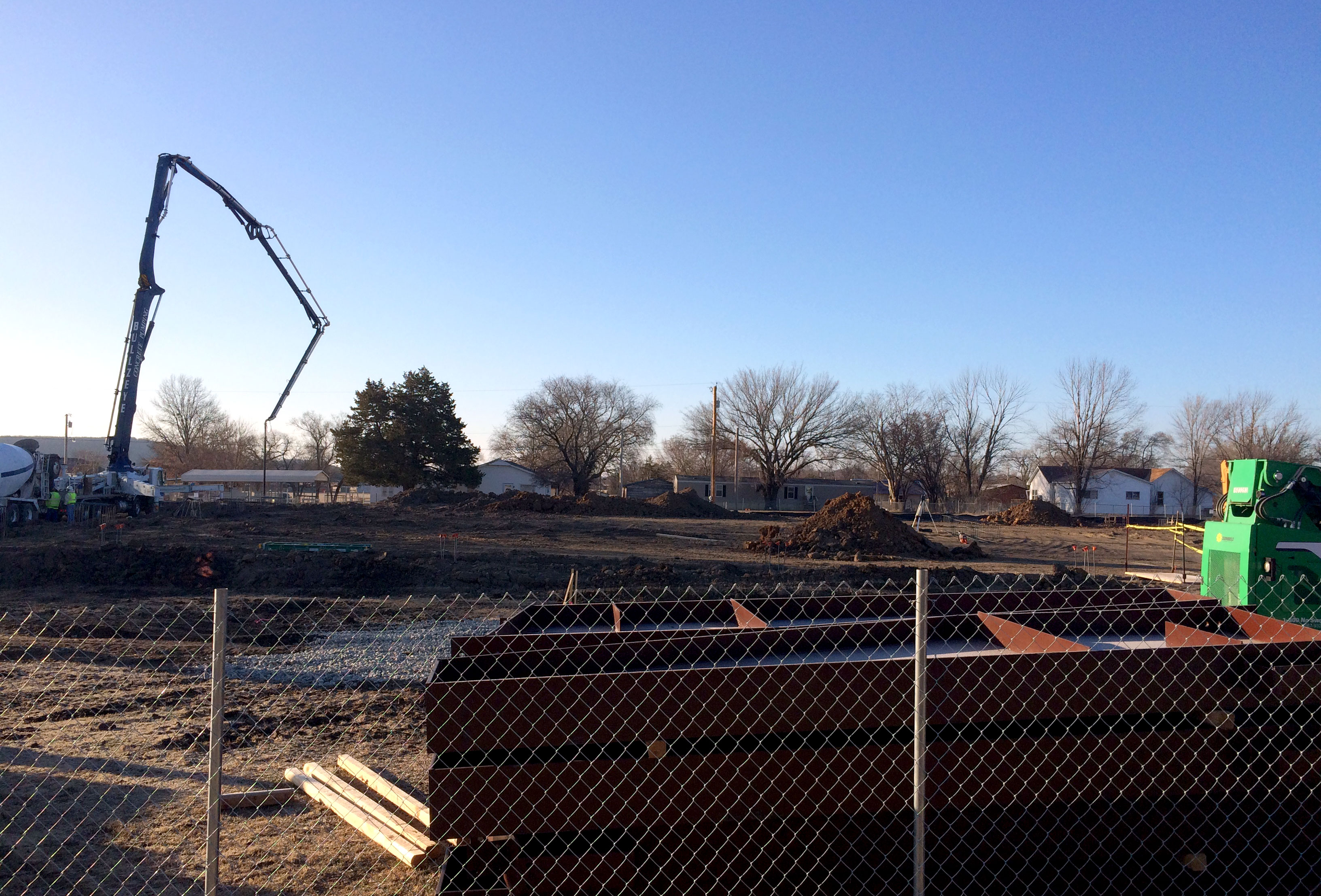 Pawhuska arbor to be completed in May

Construction on the new Pawhuska Indian Village dance arbor brought nostalgic feelings and memories among Osages who witnessed the first concrete foundation pour during a small Feb. 12 gathering next to the building site.

The concrete pour is one of the first major steps toward building the new arbor on the same site where the former one stood since the 1960s. Pending weather conditions, the new arbor, estimated at 36,100 square-feet, is expected to be built and completed by early May, according to Pawhuska village Five-Man Board Chairwoman Paula Stabler.

Amid freezing temperatures and wind that morning, nearly 30 Osages, including elected officials, gathered under the visitor arbor north of the site as construction crews used a cement truck and heavy crane machinery to start pouring an initial 400 square-feet of concrete that will support the dance arbor, which will be the largest among the three Osage districts.

The board also arranged for the attendees to help build a strand of beads on a necklace-length string. Those attendees, from newborn age to elder, each picked a bead from a tray of assorted sizes and styles and made from different gems including turquoise. Village resident Kathyrn Redcorn took all of the picked beads and placed them on the string. Those beads were placed in another concrete pour after the initial one that morning.

The new arbor will be built with sidewalks, utilities and restrooms in addition to the metal arbor, itself.

Principal Chief Geoffrey Standing Bear recalled the years when the last arbor was built during his childhood. At the time, he remembers the Pawhuska committee paying for that arbor with funds out-of-pocket and fundraising efforts.

Assistant Principal Chief Raymond Red Corn also recalled the village landscape in earlier years during his childhood and through viewing old photographs featuring the older arbor and a roundhouse structure. “I don’t think of myself as old, but man, when you’re on your third arbor you’re old,” he quipped and the attendees laughed. Red Corn added he is pleased the Nation is building the arbor that will benefit younger generations starting with his grandchildren and those to come.

Standing Bear applauded the efforts of the Nation, Pawhuska dance committee and the five-man village board stating he believes building the arbor is a “good use” of the Nation’s money.

Standing Bear also said he’s looking forward to the future by helping the Hominy village with a newer arbor and added “Like they say: You take care of this dance and it takes care of you.”

ON Congressman Archie Mason, also head committeeman for the Grayhorse District, called the occasion “very historic” as the new arbor will take care of the next generations to follow him, adding the arbors are the “cultural center” for the Osage.

Congressman Otto Hamilton, who sponsored the legislation (ONCA 14-56) for the Pawhuska arbor funding, held his infant daughter Wahreshe and spoke as construction noise occurred in the background.

“It takes all year to get ready for those four days – there’s only a few of us that fully participate and there’s even fewer that fully understand what goes on and I’m one of those that’s still learning,” he said. “I’ve been dancing for over 30 years now and I’m still learning and I’m just glad to be here today.”