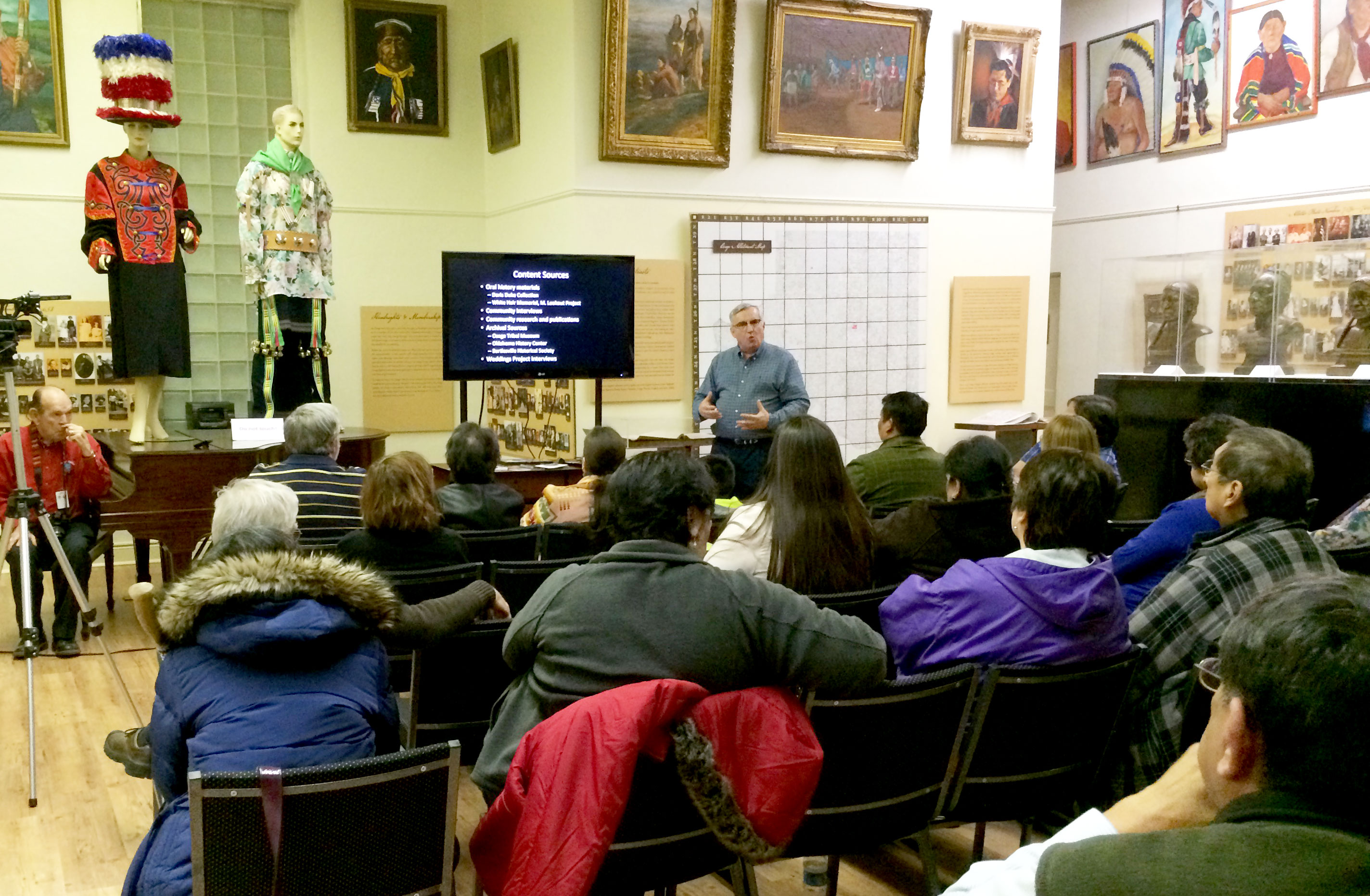 Osages got a rare glimpse of what an Osage wedding looked like in the early 1900s.

Dr. Daniel Swan, an associate professor at the University of Oklahoma and Associate Curator of Ethnology at the Sam Noble Museum of Natural History, showed black and white video footage of an Osage wedding to more than 30 attendees at the Osage Tribal Museum on Feb. 19.

He, along with researchers from the Sam Noble Museum, OU and Osage museum, have been collaborating for the past three years on the Osage Weddings Project, a project to produce a museum exhibition and book by 2017.

“It’s amazing to me that we have all these wonderful Osage voices to tell these stories,” Swan said.

The groups have hosted community meetings in the past and most recently an Evening of Photographs on Oct. 23 at the Osage museum. More than 100 photographs were displayed and community members identified individuals, places, events and dates. The wedding for Ruth Brave and Russell Wagoshe was identified at the event.

From that evening of photographs a website was born: osageweddings.com.

Swan posted more photographs in need of identification on the site and made it open for community comment.

“You can see the faces [in the archival photos] really clear from the way we built the site,” Swan said. “Over 6,000 people have looked at the site … makes us feel good about what we’ve been able to accomplish.”

Researchers have been working the past three years to gather photographs, oral histories, film footage, scholarly papers and newspaper accounts to develop the materials for the exhibition and book.

A ‘race’ to the altar

Swan showed black and white video footage of a Coshehe family wedding, which both delighted and surprised the event attendees.

The video began by showing about 30 children gathered in a field and black automobiles driving slowly about 100 yards in the distance. A shotgun was fired near the automobiles, the smoke billowing up from the gun, and the children began racing toward the cars.

Swan said many Osage Wedding processions began this way, with a race, and the winning child received a horse as their prize. The procession of automobiles, decorated with Pendleton blankets, slowly drove by the camera and sitting inside the vehicles were the wedding party – all the women wearing Osage wedding coats and wedding hats. Decorated horses were walked down the road, with Pendleton blankets on their backs and eagle feathers tied to their tails – gifts for the groom’s family.

Once they arrived to meet the groom’s family, they all gathered under an arbor or a big tent, and the women took off the wedding clothes and put them on the women in the groom’s family – much the same as today’s Paying for the Drum ceremony. Once the clothes were exchanged, with the bride sitting on the floor in the middle, both families sat down for a meal and the bride and groom were married.

William Fletcher, a Hominy District elder and the oldest living former Hominy Drumkeeper, answered a question as to why food is always a central element in Osage ceremonies.

“My grandmother and aunt told me that food was essential to life and that’s why it was so important,” Fletcher is a direct descendant of Black Dog. “That’s why food was always involved.”

Swan said there were three interviews that were critical to his research. They were interviews with Myrtle Unap, Rose Albert Hill and Mr. and Mrs. Whitehorn.

Myrtle had never met the boy she was going to marry and “it was a very powerful and poignant story” of how she felt when she found out she was getting married, he said. All interviews will be catalogued in his book and the exhibition.

Video footage of Osage Weddings can be found on the Oklahoma History Society and the Tulsa Historical Society websites, he said.

Swan mentioned a newspaper article that featured an interview with Marguerite Matin Waller. He said in the article, Waller reveals in her sister’s wedding they didn’t give away horses, they gave away new cars. She also drove her sister to the wedding.