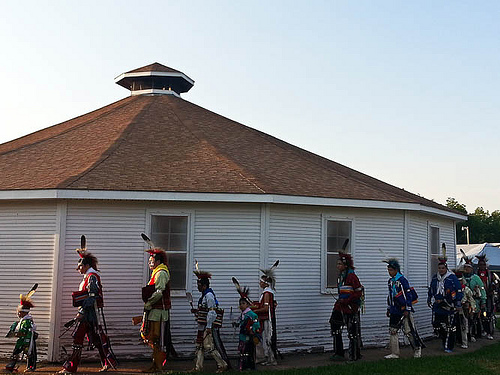 Wah-Zha-Zhi Cultural Center director, Vann Bighorse, Sherman Bold Warrior and Osage language instructor Cameron Pratt are on a mission: to save the meaning and history of Osage individual songs.

Osage Individual Songs are sung on Sundays of the three In-Lon-Schka dances. Each song pertains to an individual and has a story. Most of the individuals who have songs on Sundays are no longer living; however, a few Osages remain who still have individual songs. Many say the most important day of In-Lon-Schka is Sunday.

“For the past five years I’ve envisioned this project and since Chief Standing Bear has been in office he’s encouraged our culture and he’s in support of this project. I’m grateful for that and we also went through the Elders Committee and they’re on board and have their blessing as well,” Bighorse said. “I feel good about that, our elders feel it’s worthwhile to save as well.”

Since Ponca singers in the Ponca language composed a majority of the individual songs, Bighorse has enlisted Bold Warrior to help translate the songs and learn the history behind them.

The story is a Ponca warrior was on the look out for a Sioux war party who was led by a notorious leader who hated Poncas, he said. When that warrior saw the Sioux war party coming he ran down from his post and yelled as loud as he could, for as long as he could, then blew his whistle. The Poncas won the battle.

“And so this song it talks about ‘from the top of the hill he came down and he yelled, he blew his whistle,’ so the story is from that time, from the killing of that Sioux leader,” Bold Warrior said. “Because grandpa Fast Horse was there, he was in on that fight and he told my father the story of that song.”

Principal Chief Geoffrey Standing Bear said he is very excited about the project because he wants the knowledge of the songs and their meaning to be passed down to younger generations as they carry on the In-Lon-Schka. He said this is the last chance to preserve these stories and histories and after this project is over, he wants Bighorse to begin work on translating old recordings the Smithsonian Institution has on wax cylinder.

“If we don’t know what these songs mean then we don’t understand what we’re doing,” Standing Bear said. “It’s God’s gift to us, we’re required to take care of it.”

Osage lady singer Julia Lookout, daughter of the late Osage singer Morris Lookout, said her father researched and translated all of the Grayhorse District's individual songs and also worked on translating Hominy and Pawhuska's individual songs. She said she has copies of his work and recordings at her home and so does the University of Tulsa Library and Osage singer Scott George. She's been singing for more than 30 years at In-Lon-Schka.

Bighorse said the project will be ongoing and it will take time to identify who wrote the songs, translate the songs, write down the history, and how the song came to be in the In-Lon-Schka. He said it’s already too late for some songs because once they’ve stopped being sung and there’s no written record or anyone to remember them, they’re lost. Such is the case for songs that were sung at Osage Days for Governor Joe, Black Dog, and a member of the McCarthy family.

“That’s what really concerns me, those types of songs. Once you quit singing them they’re pretty much lost so it would be nice to have them archived and translated where we’ll have them,” Bighorse said. “We also have the veterans songs that go with Grayhorse War Mothers, Hominy War Mothers and Pawhuska American Legion Post 198, so we have over 100 individual songs that belong with the Osage people.”

When they’re finished, the information they put together will be stored at the cultural center’s library for all to see, read and research and the Nation’s Archives department.

“It means more, the words in the song, it means more to you when you know what they’re saying,” Bighorse said. “And then they pass it on down to these children, and then they’re going to know and it will always be alive and it will be there for our people.”

[This story was clarified to include the information about Morris Lookout on April 16, 2015.]