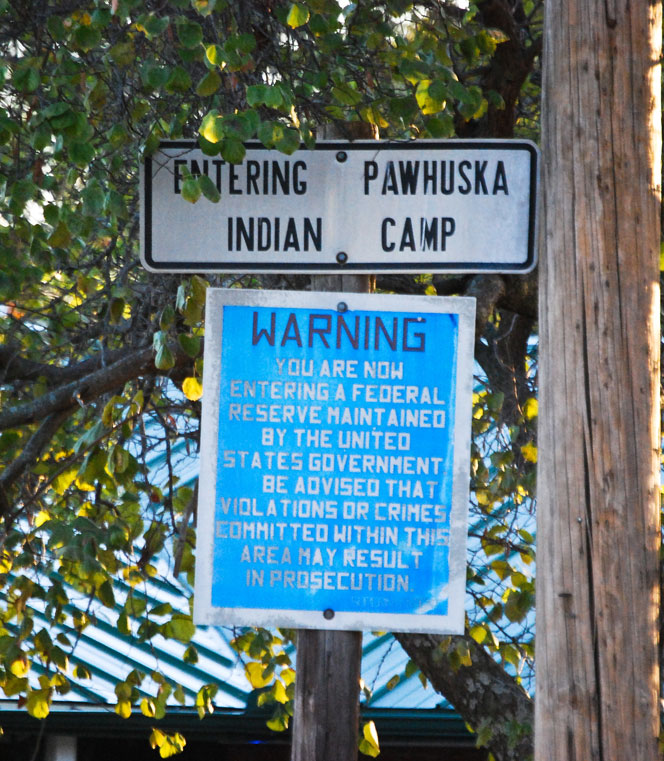 The Fourth ON Congress passed a bill (ONCA 15-31 sponsored by Congressman RJ Walker) on April 20 with a 7-4 vote putting the five to 10-year banishment penalty into Osage law targeting those who are convicted of selling, manufacturing or distributing dangerous drugs including methamphetamine on the Nation’s properties including the three villages, the government campus in Pawhuska and the seven Osage Casinos.

“The villages shouldn’t be a safe haven for people to go manufacture, sell drugs or any criminals to consider it a safe haven,” Walker told the Congressional governmental operations committee. “I know some have expressed that it seems harsh, we wouldn’t be the first tribal nation to impose harsh penalties for situations like this or criminals in this case. I think it sends a message to our people that we’re going to handle these types of crimes in a very serious way – If you want to sell drugs, manufacture drugs, you’re not going to do it in the village and if you do, you’re out for five years, period.”

ONCA 15-31 mirrors a similar bill passed by the Third ON Congress (sponsored by then-Congressman Raymond Red Corn) in 2014, but that bill was vetoed by then-Principal Chief Scott BigHorse who questioned whether all convicts (Osage and non-Osage) would be treated equally. The 2014 bill drew Congressional debate also on whether banishment was too harsh and whether the Nation should offer more treatment opportunities to those who use drugs and face court action.

The banishment bills were prompted by the Pawhuska Indian Village Five-Man Board where board members and fellow residents have complained for years of criminal drug activity taking place in the residential village. Those concerns remained unchanged when ONCA 15-31 came back for consideration.

Pawhuska village board Chairwoman Paula Stabler told the governmental operations committee the support for the banishment bill comes from the old adage of “don’t do drugs. If you want to respect the village, that’s what you need to live in the village, you need to respect the culture and the place we have there and if they won’t stop, they need to take the punishment and realize that’s what’s going to happen to them.”

ONCA 15-31 amends the Nation’s criminal code to include a 5-10 year banishment punishment to those convicted of committing a “dangerous drug offense.” Those convicted already face jail time and fines imposed by a judge during sentencing.

According to ONCA 15-31, the bill targets “dangerous drugs” which include controlled or counterfeit substances that: include drug products that contain more than nine grams of ephedrine, pseudo-ephedrine or phenylpropenalamine in addition to other dangerous drugs prohibited by federal law. All three of these drug substances are known key ingredients used to manufacture meth. The bill also exempts Native American Church members who use, sell and possess peyote for sacraments and services consistent with the American Indian Religious Freedom Act.

During his tenure, former ON Attorney General Jeff Jones said he’s banished one person from the Pawhuska village for meth possession. Banishment is available as a punishment option in the Osage criminal code and the banishment sentence occurred as part of a plea deal in that case, said Jones who added he has another case pending where the person was arrested on a possession with intention to distribute charge.

This year’s discussion and debate returned to whether the five-year minimum banishment is too harsh.

“From a real legal standpoint, we’re creating unintended consequences,” said Congresswoman Shannon Edwards who voted against the bill. “If the message that the Nation is sending is ‘you need to go away,’ I think the family support is lost, I’m not saying banishment in certain circumstances is not a viable punishment, but I’ve always taken the position when it comes to drug abuse that rehabilitation is the priority.”

Congressman Ron Shaw said he believes the five-year banishment is too harsh as well as the mandatory sentence. “How do we know how long it has to be for it to become effective? I don’t think that number’s known, but I think the lack of being able to come back (to court) to shorten it for people who are following the good road to recovery or avail themselves of treatment, I think that’s overly harsh and I think it should be reconsidered to allow for such petitions to the court to be allowed back to their property or to live among their family.”

In his final debate time, Walker emphasized ONCA 15-31 targets “convicted drug dealers, not for the users – yes a lot of drug dealers are users – but they’re the users who are also taking advantage of others … I think that’s the kind of message this Nation needs to say to drug dealers. As far as prevention? Yes, those prevention methods need to be looked at all the time and improved all the time. We have a Prevention Program, they can do that, but incorporate into this law? I just think it’s not necessary – We need to send a strong message to those who are selling drugs on our land that this government will not tolerate it.”

Principal Chief Geoffrey Standing Bear, who voted for the 2014 banishment bill as a Congressman, signed ONCA 15-31 into law on April 21.