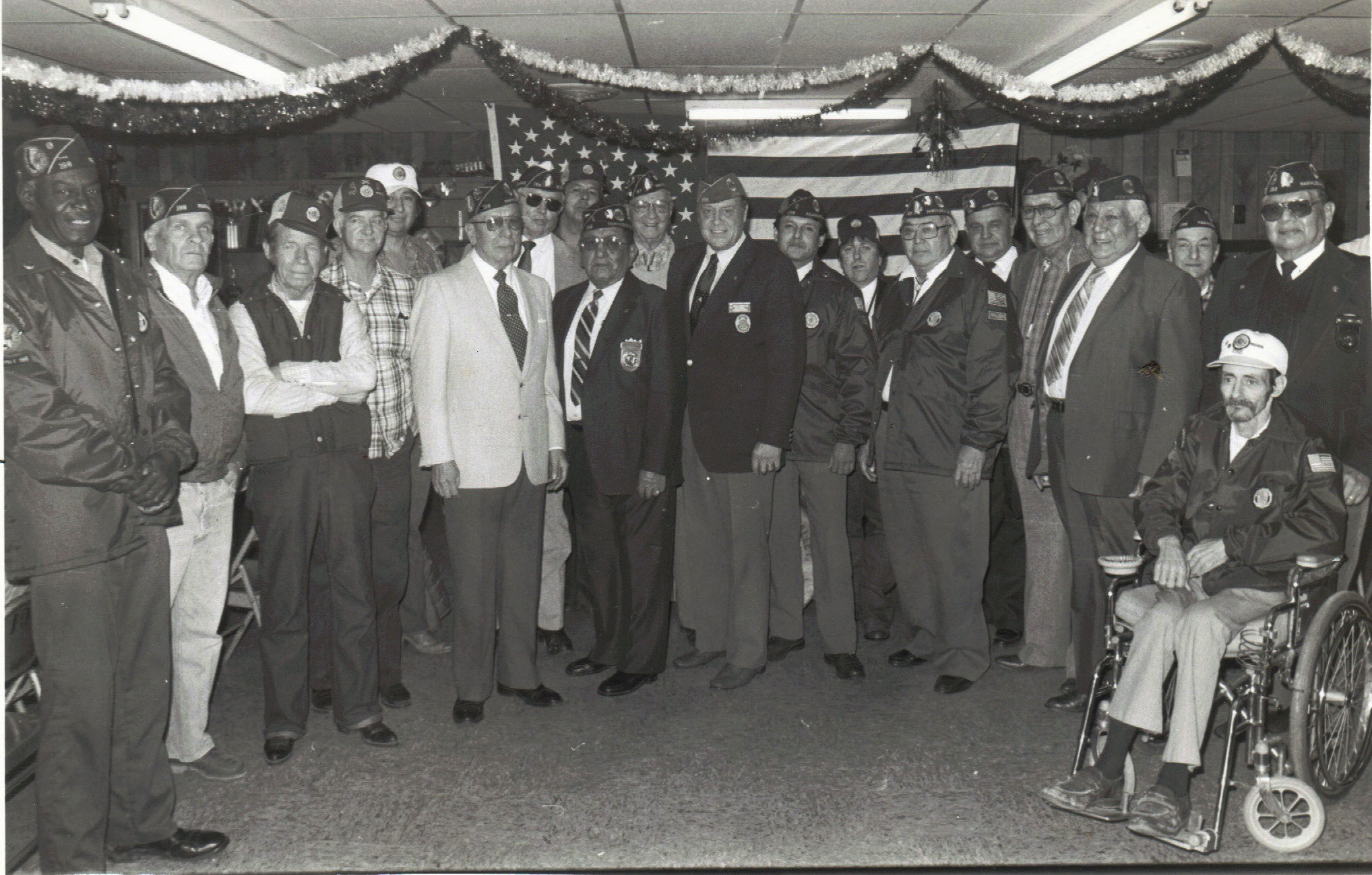 Harold Bigheart Smalley was the first U.S. sailor killed in the Battle of Java Sea, 1944, on Midway Island in WWII. He grew up in California but his people were Osages from Barnsdall, Okla. Not many people still know he was directly descended from Chief James Bigheart, said Vietnam Veteran John Henry Mashunkashey.

“When the post was formed his name was selected. The American Legion has to have names, his name got voted in as Post 198, that’s how that started,” Mashunkashey said.

The 35 charter members of the Harold Bigheart Smalley American Legion Post 198, mostly Osage veterans, formed the post in 1962, according to their charter that hangs on the wall of the Legion Room in the Wah-Zha-Zhi Cultural Center. At the time Post 198 was formed, there were two Legion Posts in Pawhuska, Mashunkashey said. There was Post 197 and Post 198. Post 197 was for white veterans, and Post 198 was for black veterans. The Native American veterans belonged to Post 197 but the non-Native veterans felt the Native American veterans would be better off having their own post since there were so many Osage cultural events they attended and helped with, Mashunkashey said.

Post 198 didn’t have many members and one of their veterans offered the Post 198 to the Native American veterans and they took it, incorporating the black veterans into their fold, Mashunkashey said.

They began their meetings in a parking lot, since they didn’t have a building to meet in. They moved the meetings to someone’s house and then the meetings were moved to Wakon Iron. The meetings moved to the building that currently houses the Osage Nation Fitness Center in Pawhuska after Bingo revenue came in. After the Wah-Zha-Zhi Cultural Center was built Post 198 moved in and have been there ever since, Mashunkashey said.

“The Minerals Council made a resolution there would always be a Harold Bigheart Smalley American Legion Post 198 in our tribe,” Mashunkashey said. “In my book you can’t do without the military organizations within your tribe, tribal districts, because they’re the ones who are going to come participate when your folks pass away, bring the color guard, rifle company to take care of the things you want to take care of, honor guard.”

Oliver Abrams, 88 years old and the last remaining charter member of Post 198, said he remembers being sworn in with the rest of the original Legionnaires when the post was formed. Abrams, who is Seneca from New York and lived in Pawhuska in the 60s because he was married to an Osage woman named Martha Jones at the time, remembers Ed Red Eagle Sr. and Archie Mason Sr.

“We elected Ed Red Eagle Sr. as the first Commander, so we went from there and it was just a kind of natural outgrowth of events that got us together. Nothing special, but we decided to have a post,” Abrams said. “Just the meetings, we didn’t get into anything extra. We just had our meetings, regular meetings.”

Abrams was a High School sophomore going to school near Buffalo, New York, when WWII broke out. He enlisted in the U.S. Army shortly after graduation in 1944, told his mother on Friday he had enlisted and was shipped out to boot camp that Monday, he said. He was trained as a radio operator and was assigned in the British West Indies in South America.

After he married Jones and worked in various oil field and geology jobs he went back to school to the University of Oklahoma. He and Jones divorced and he went on to work at OU, then in Washington, D.C., and married Rachel Pitts, another Osage woman. He worked for the National Indian Education program for years, traveling to tribes and reservations all over Indian Country, making many connections. He has a scholarship named after him with the San Francisco Bay Area Council that began in the 70s and it goes to one boy and one girl every year.

Although his life took him across the country, he always maintained his Post 198 membership, paying his dues every year. For decades he tried to always make it back for War Mother’s dances, Post 198 dances, funerals, Veterans Day and Memorial Day. Post 198 gave him a lifetime membership.

Even at 88 years old he’s planning his next trip to Oklahoma to see his children, grandchildren and great-grandchildren. He’s also a member of the Kiowa Gourd Clan and dances with them on the Fourth of July, he hopes to make it this year.

The majority of funding for Post 198 comes from the Osage Congress through appropriation. The Post also holds fundraisers and accepts donations as well, Mashunkashey said.

They hold annual dances, partner with Toys for Tots at Christmas time, Boy Scouts, Girl Scouts, Boys State, build handicap ramps for veterans, they have a Post 198 College Scholarship, and they also help veterans sign up for benefits and services whenever they can.

“The tribe is helping us do our job for the tribe,” Mashunkashey said. “It’s really appreciated because we have no means of making any money around here because people just don’t buy your meatpies anymore.”

Mashunkashey said there are many Osage veterans from Grayhorse, Hominy and Pawhuska, Legionnaires and a lot of people saw them every day and didn’t know they served their country.

He said it’s important to remember and honor veterans because after Vietnam he and other Osage soldiers had a hard time when they came home. People were not supportive of the Vietnam War and he said he didn’t tell people for 25 years he served because he wanted to avoid the questions and accusations it brought.

Veterans he wanted remembered were Geoffrey Tucker, Cody Tucker and Ted Mashburn Jr., from Grayhorse, who all served in Vietnam. He said no one ever honored them and it was very hurtful to him because he knew them and they were good men. He said it’s important to remember Gen. Clarence Tinker, the first Native American general in U.S. history and that he was Osage. Other WWII veterans like the Maker brothers and Tallchief brothers who served in WWII, including George and John Tallchief; Charles Lookout who served in WWII who is still living and resides in Tulsa; Boulanger family veterans; Raymond Lasley Sr., Morris Lookout, Stanley Bigheart, Russell Warrior, Leroy Maker, Marvin Stepson Sr., Kenneth Jump and so many more.

He said after Gen. Tinker’s plane went down in the Battle of Midway, all of the Osages that had been deployed got to come home for a 3-day dance and memorial for Tinker at the Pawhuska Indian Village. Kenneth Jump was one of those that came home and after he had finished dancing he went back to his deployment and was in the first wave of the Invasion of Normandy at Omaha Beach. “Not everyone knows that, or how bad it was,” he said. “If I was going to put up a statue of a man it would be of Gen. Tinker.”

Mashunkashey is a big supporter of the Wall of Heroes the Wah-Zha-Zhi Cultural Center is developing and some day hopes to have a state-of-the-art Osage Veterans Memorial that tells the stories of Osage veterans, the wars they served in and their lives after their service.

“Osages have a bad habit of overlooking their veterans and it’s really aggravating,” Mashunkashey said. “There should be some WWI, WWII veterans and Korean War veterans who should be put on the stage and honored. Most of them are dead now and that’s what’s so terrible because they’re not around to see it.”

[This story was updated on May 12, 2015 to reflect a correction to the names Francis and Louis Fronkier.]