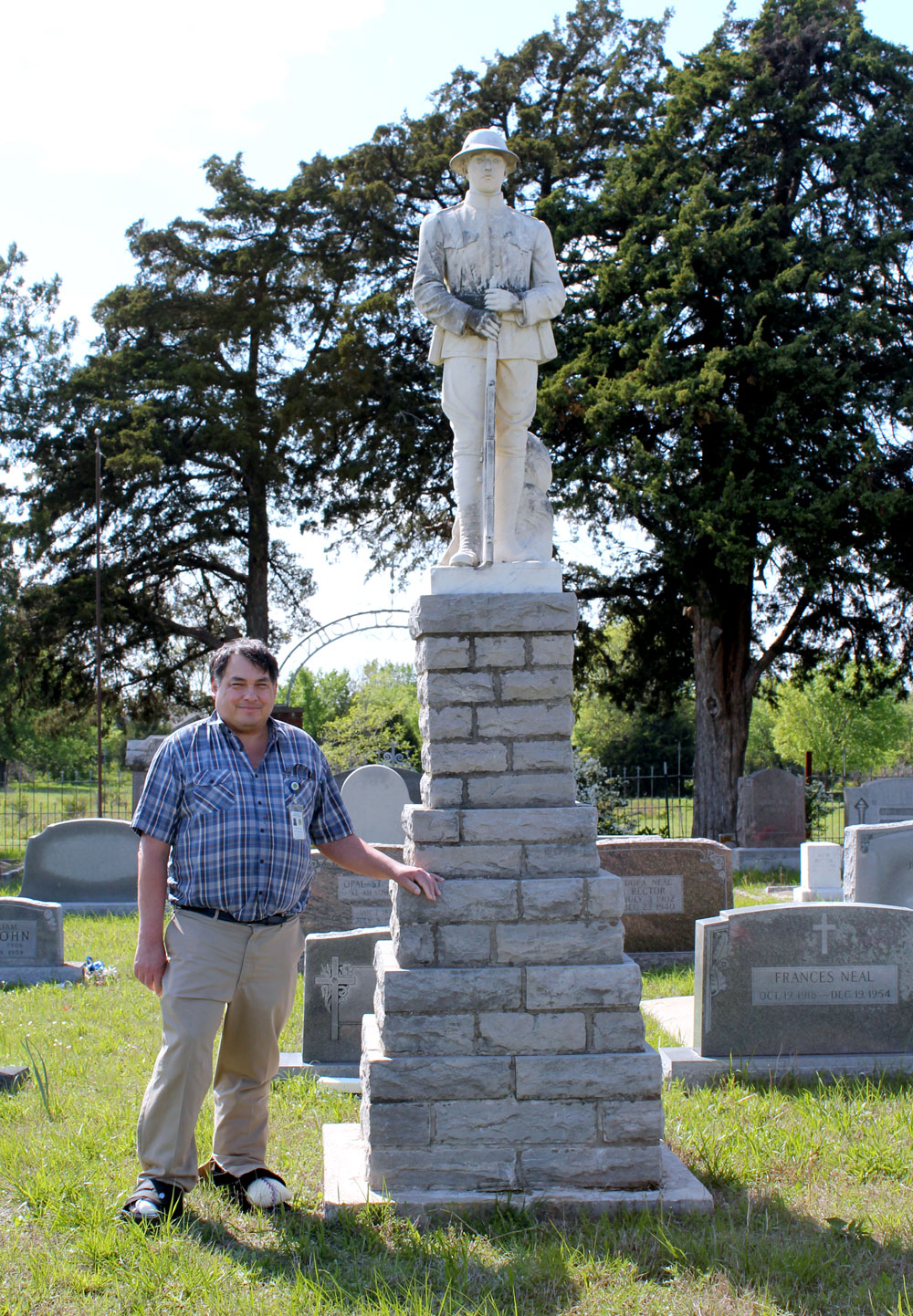 During World War I and after, Native American soldiers could not be buried in national cemeteries, even though they had served in the U.S. military. Native Americans didn’t become U.S. citizens until 1924.

In an effort to provide grieving families a place to lay their sons to rest, WWI veteran Pierce St. John and his wife Opal, set aside one acre of their land in 1918 to provide such a place. Before Opal passed, she sold the one-acre to the federal government in 1935 so the cemetery would not be lost.

Today, his great-grandson, William St. John, is now the caretaker of the Pierce St. John Cemetery, located southeast of Pawhuska, just off of the intersection of Highways 11 and 99.

“About 54 people are buried here, not all veterans. Some are family, friends to the family, and some are straight up veterans,” St. John said. “We’re keeping the tradition going, allowing Native American veterans if they need to be buried, if they need a plot, they would have a place to be at peace.”

One such veteran was Gary Elsberry, who died one year ago after losing his battle with cancer. Elsberry served in the U.S. Army during the Vietnam War era and was stationed in Germany. His funeral instructions included being cremated with his ashes placed in an ammunition can. His brother, Harry Elsberry, who also served in Vietnam in the U.S. Marines, was executor of his estate and after Gary passed he contacted St. John. He said they were treated with courtesy and respect. Harry dug the plot for his brother’s ashes and buried them, along with a beaded hatchet. After the gun salute he took the brass and put it in the grave with his brother.

“He was so, so great, no problem, whatever I wanted, he said fine,” Harry Elsberry said of St. John. “They were fantastic, I went to William and said Gary died and William said whenever he’s ready it’s there for him. Just really, very thoughtful, and compassionate. It was a free burial, no charge, I gave him a blanket because that’s the custom.”

The cemetery, 40 feet by 50 feet, is currently full. St. John said it was his great-grandmother’s wish to expand the cemetery to a full acre and after donations made from the American Legion Post 198, Principal Chief Geoffrey Standing Bear, the Bighorse family, Patricia Turley and Lou Brock, he is expanding the cemetery to a full acre and the posts have already been placed. Barbed wire will be placed on the outside of the fence to ward off cows from plowing over the fence, something they have been doing lately.

In the middle of the cemetery is a statue of a WWI Doughboy that his great-grandfather Pierce St. John had commissioned from France. The statue arrived at the Neloganey train station and was brought by horseback to the cemetery and it was assembled there. Every Memorial Day, Post 198 does a gun salute at the cemetery.

St. John walked through the graves of the cemetery on April 20, noting various Osages and where they served. Some of the earliest graves have the date of birth as Jan. 1 because they didn’t know the birth date of the veteran.

He thinks his great-grandmother would approve of the expansion.

“This is what she intended, what her dream was about.”