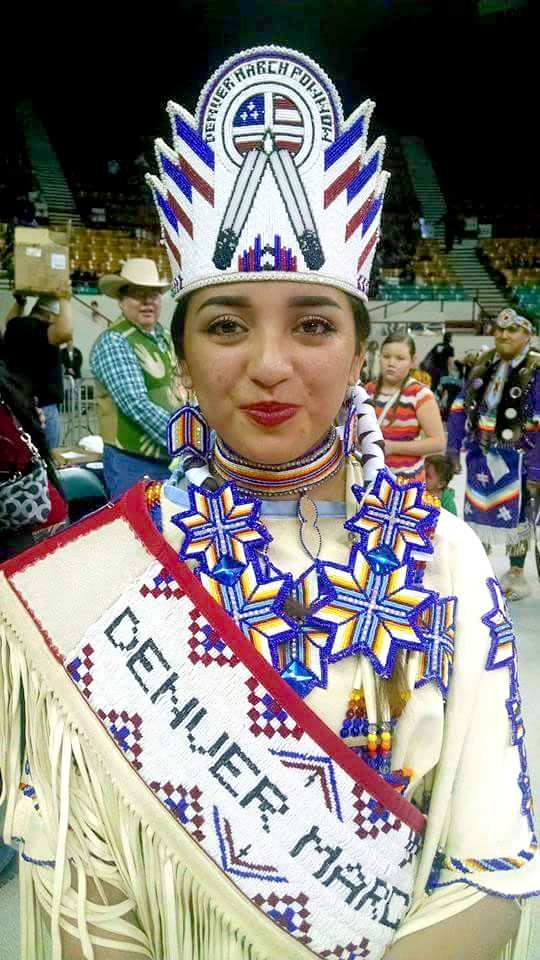 Makayla Sage thought it was going to be just another Denver March Powwow with her family. But as one of the largest powwows in the world came to a close, they read the bio of the next Denver March Princess and announced her name.

“She heard the bio and turned to me with a strange, bewildered look on her face,” said her mother Laura Sage, Osage. “Then they announced her name as the new Denver March Powwow princess. Her sisters screamed and began to shed tears of joy. It was a moment I will never forget.”

Makayla, 17, has been involved in dancing and the powwow culture since she was was plumed as an infant during Cheyenne Labor Day Powwow, Sage said. Their Osage family belongs to the Zon-Zo-Li District and they participate in the yearly In-Lon-Schka dances as well.

She will graduate from Ponca City High School this month where she participates in track, softball, basketball, cheerleading and chorale.

The three-day Denver March Powwow, held in Denver, Colo., at the Denver Coliseum, started out as a weekly youth enrichment program but has turned into one of the largest powwows in the world. It brings more than a thousand dancers each year, more than 40 drum groups, more than 150 vendors, all from tribes across the United States, Canada and Mexico.

There are dance categories from “Golden Age” to “Tiny Tots” and winners receive a monetary award and embroidered jackets.

Prior to the announcement of her name at the close of the powwow, Makayla had no clue she had been chosen to be the next princess, a coveted spot by many teen dancers.

The powwow committee had approached her parents during the powwow and asked if they would accept on her behalf. Her mother wrote a short bio and kept it a secret.

“Ms. Sage has been attending [Denver March] since she danced in the junior category. She is an excellent student, actively participates in sports, and conducts herself in a respectful manner, both in the dance arena and everyday life,” said Grace Gillette, powwow committee member. “The Denver March Powwow princess committee felt she would be a great ambassador for their next year’s event.”

According to Gillette, the powwow committee does not hold a pageant to select their princess, the Board of Directors makes nominations and vote. The key to selection is participation and they make discreet inquiries about their nominees regarding scholastic activities.

Makayla will be the Denver March ambassador and will attend as many powwows as she can to represent her new title. She may be asked to give presentations on culture and traditions and serve on panels on the same topics, Gillette said. She will also participate in American Indian dance performances and help judge pageants.

This is Makayla’s first princess title and she is very excited to be wearing the crown and title. Her crown and Denver March Powwow Princess sash are fully beaded and match.

“My number one goal is to do my best and represent as best I can for the Denver March Powwow committee and to travel as much as possible so I can represent my title,” Makayla said. “I want to make my parents and families proud, at the same time fulfill my goals as a young Native American lady and now as the Denver March Princess.”

She is a member of the Osage, Comanche, Otoe-Missouria and Arapaho tribal nations.

She is the daughter of Louie and Laura Sage and has three sisters, Whitney, Catherine, and Rickielynn. Her grandparents are Oliver and Teresa Littlecook, Ronnie and Lillian Goodeagle and JoNeda Sage, the late Bill Sage and the late John Hopper Jr.

“It is such an honor for my daughter to have the opportunity to uphold and represent such a prestigious title. She is truly grateful as well as all our family members,” Sage said. “She understands the responsibilities that it will take to be in this position, and we hope she gains and learns life lessons during her reign.

“We try to teach our daughters the best we know how and raise them with attributes that integrates both education and culture.”