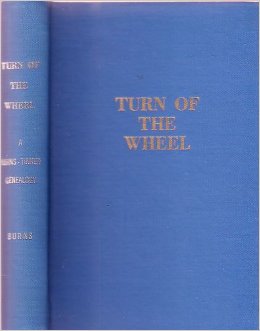 Louis F. Burns was a member of the Osage Mottled Eagle clan. He was born in 1920, and died in 2012 in Pawhuska. Burns was the author of several books dealing with Osage tribal history and other topics. Carole Bennett and Marilee Camblin, his cousins, recently contacted Louis’s son Keith to renew interest in a particular book his father wrote 35 years ago: “Turn of the Wheel, a Genealogy of the Burns and Tinker Families.”

In the 1970’s, after Alex Haley’s book “Roots” became the basis for a popular television series, many people began to investigate past generations of their families. Louis expanded his knowledge of the Osages to focus on his own roots, researching and interviewing extensively to find out details about his family tree. “Turn of the Wheel” was the result. It presents a mix of information as overview of American frontier history, family ancestry lists, and personal anecdotes.

The original version of “Wheel” comprises 400 pages, about half of which are genealogy lists of names and known birth/death dates for several families. The book tracks twelve generations of the Tinker family alone. In addition to the Tinker records, prominent group listings cover the Burns ancestry, as well as the Roy, Lessert, Revard, Ferrier, Meek, Harness and several other families.

After its completion in 1980, Burns distributed the book to family, friends and various libraries and learning centers. Although several of his other books are for sale, “Wheel” has been generally unavailable for some time, and many Burns-Tinker descendants continue to search for copies. Younger people named in “Wheel” now want the book for their children and grandchildren. A copy of the original “Turn of the Wheel” is available at the Osage Tribal Museum for those wishing to review its contents or look for particular names.

Now, Keith Burns is working with his cousins to have the book reprinted so that additional copies will be available soon for purchase. Persons familiar with or related to the lineages indexed in “Wheel” are those most likely to want to own a copy. “Wheel” is also available at Clifton’s Art and Jewelry store on Main Street in Pawhuska.

The Osage County Historical Museum will sell the reprinted book when it becomes available.  The museum expects it by late summer, anyone wanting to preorder a copy can stop by or contact them at (918) 287-9119.