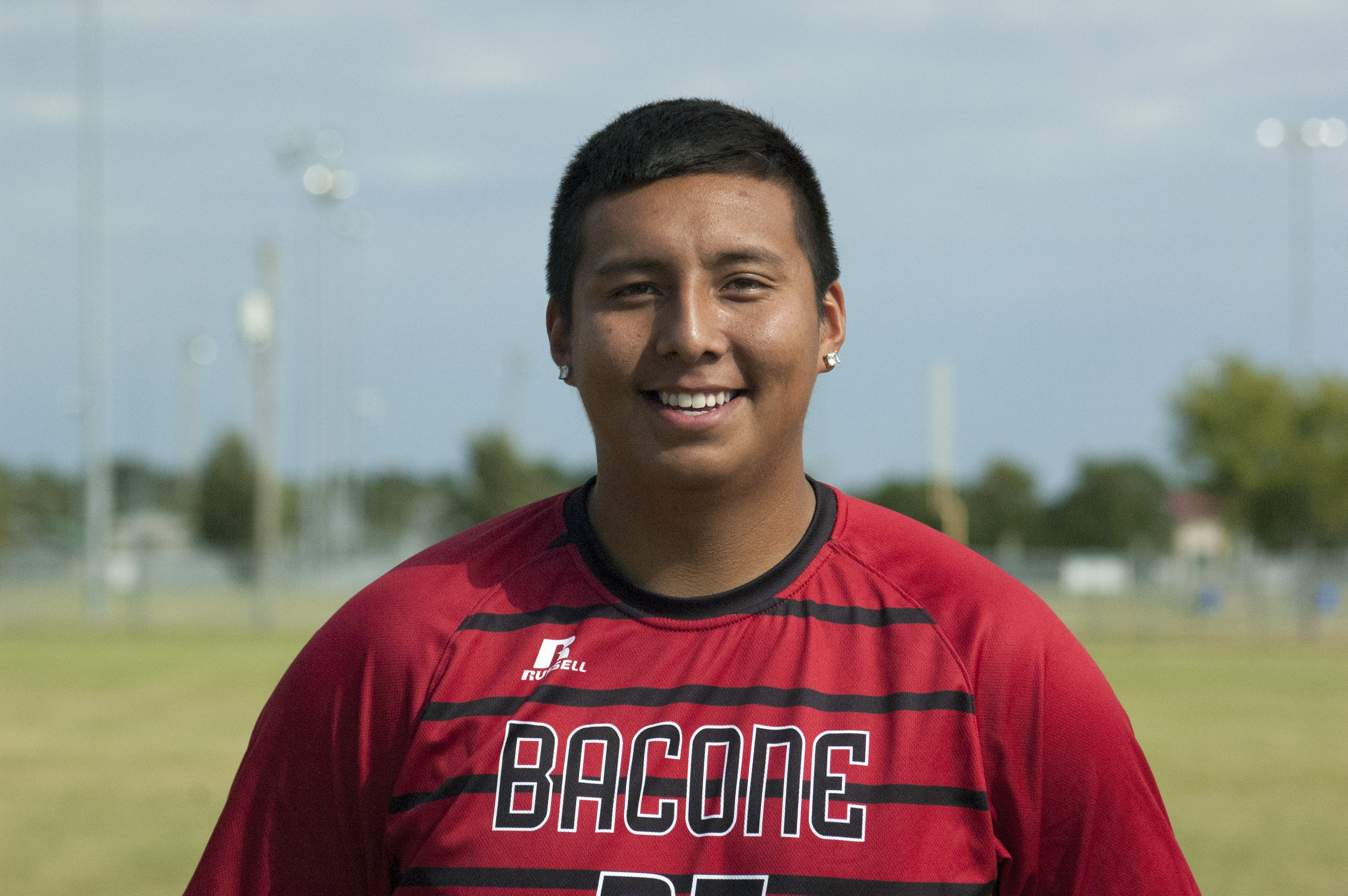 William “Wilson” Hight III was named to the Red River Athletic Conference Champions of Character Team by the conference’s head coaches as a postseason award winner of the 2014 Men’s Soccer All-Conference team.

Players are chosen who exemplify citizenship, sportsmanship and leadership. They are also chosen for core values shown on and off the field; the values are integrity, respect and responsibility.

“‪Will played in 11 games for us last fall and started in four. ‪His size and foot skill make him a solid Center Back,” said James Carter, Bacone head soccer coach. “That being said, he makes his largest contributions as a fantastic leader, communicator, and motivator.”

Hight is keeping busy at Bacone College. A transfer from Haskell Indian Nations University, he is playing soccer and basketball for the Warriors. Based in Muscogee, Okla., Bacone is a four-year liberal arts college affiliated with the American Baptist Church embracing a historic educational mission with American Indians, according to the college’s website.

Though he did not play sports for Haskell he still had the mindset that soccer was in his future, he said. He heard about Bacone and their soccer program and decided to take a chance and emailed the soccer coach. After a trip to visit the campus, he ended up signing a $7,000 scholarship a couple weeks later.

“It just goes to show you that if you have a dream never give up on it no matter the situation you are in,“ Hight said. “I knew I had some fight left in me to play soccer and I followed through the moment I got a chance. I hope to inspire someone out there who is coming up into their sports career to never give up on your dreams.”

Hight attended HINU right after high school and focused on schoolwork. In his free time he would work out at the gym and play basketball for fun in pick up games.

“I feel this helped my basketball game come up to another level from where I was at and helped me walk onto Bacone’s JV team,” Hight said.

Hight was able to walk on halfway into the Junior Varsity basketball season as a shooting guard his first semester at Bacone.

On the soccer team he holds the position of a center back, someone who plays in front of the goalie and is in the middle of the defense.

“My favorite moment in sports would have to be my first college start, although we didn’t win, it was a dream come true for me,” he said. “Since I was little, and playing through my club and high school career, to make it to the next level and for it to finally happen was such an accomplishment for me.”

He said when he walks on to the soccer field or the basketball court, it is a unique feeling that other athletes would understand and all his stress and everyday problems in life go away for the time of the game. His focus is strictly on the game and he is in the zone. Hight has been playing soccer and basketball since the age of five.

Hight is majoring in business management and is currently a junior at Bacone.  He said it is really difficult at times to manage schoolwork and sports.

“It’s a really difficult task especially during season and I honestly struggled with it because I was in soccer season from August to November and went right into basketball season until the end of January.”

He has practice every weekday and soccer and basketball games in and out of the state on the weekends and some weekdays, as well as having to attend all of his classes every day.

When it came to homework and having to manage his time he would make time on certain days that he didn’t have a game to study and get his homework done. He rarely has to worry about homework on overnight trips for games, however sometimes he would have to mix it up and finish some work on the trips and send them to his professors via email.

When he is not practicing basketball or soccer he is hanging out with his teammates and playing video games or going to Tulsa to hang out at the mall. He also goes home to visit family since the college is close.

He said throughout his college career his family has been there to support him from day one, as well as friends and past teammates. He said his family’s support is what has gotten him here to this point and that without their love and support he would never had made it this far.

“We have enjoyed watching Wilson participate in soccer and proud of the path he has taken in life. We are eager to see where his dreams and goals take him,” his parents said.

Growing up he played recreational soccer, club soccer in Owasso and played for Skiatook High School where he graduated in 2012. When he was young, his father was his coach.

“Sports has really taught me a lot, they taught me to be disciplined, smart, hardworking and competitive. I take all those factors into my student life,” he said.

Hight is from the Hominy District and has been dancing in the In-Lon-Schka dances since he was the age of 10. He enjoys dancing every June.

He is a member of the Osage Nation as well as Navajo, Laguna and Acoma Pueblo.