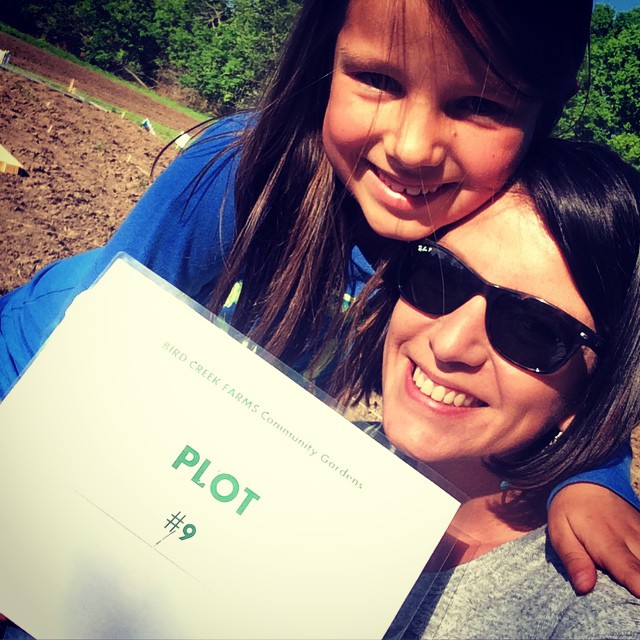 Addie Roanhorse and her eight-year-old daughter Anya are thrilled about their small plot of land they recently acquired at Bird Creek Farms.

“It’s awesome, it’s exciting. I had thought about doing it [gardening] on my own but the land is already prepped and ready, already tilled. Being in that kind of ‘beginning stage,’ being part of that starting point of [Bird Creek Farms], I think that’s really cool,” Roanhorse said. “The grocery store locally, the produce is really sad and it turns green, and not a good green, as soon as you get it home. We’re just not used to not having fresh vegetables and fruit, so to be able to grow it ourselves and have it here, is exciting.”

Roanhorse, who previously lived in Claremore, Okla., said she received a 10x10 plot at Bird Creek Farms and plans to grow tomatoes, cucumbers, habanero peppers, cilantro and squash. Her cousin picked out a plot next to hers and will grow lettuce and other ingredients for salsa and salad. She said she has had a garden of her own in the past and it’s very important to her to teach her daughter good eating habits and where her food comes from.

About 15 plots were available to community members this year and next year there’s hope for more. In the past three months Americorps workers, community members and various Osage Nation departments have been working on the land, clearing, tilling and prepping about 70 acres for community use. What began as an overgrown piece of property now has gravel roads, cleared fields for pecan and walnut picking, an arbor, farmable parcels of land, a perimeter fence and farming equipment.

Bird Creek Farms is the result of a 270-acre gift from the Lynn family in the early 1990s. Rediscovered by the Standing Bear administration in August of last year, it is located north of Lynn Avenue and directly east of the Clarence Tinker Veterans Park along the bank of Bird Creek in Pawhuska. Currently, Assistant Principal Chief Raymond Red Corn is spearheading the project and can be seen working on the land or riding a tractor at Bird Creek Farms.

The “three sisters” have been planted, which consists of corn, beans and squash, and they’re hoping to see the fruits of their labor in midsummer – but most of the crops will come up in the fall, Red Corn said. The first will be corn. If successful, it will be the largest cornfield of Osage corn since the 1920s.

A wood splitter is on the way, for cutting seasoned wood for bereaved families, Osage dinners, district committees, and sweat lodge and Native American Church ceremonies. The wood will be palletized and free of charge.

One of the Americorps workers and volunteers, Osage tribal member Scottie Supernaw, said she enjoys working at Bird Creek Farms and her nine-year-old son Tanaka and his dogs sometimes join her on the property. Her son would like to fish on the property, since the property also has access to the banks of Bird Creek.

“In the beginning we had a lot of clearing and cleaning to do on the property, but now we’re pulling the Johnson Grass out by the root so the crops can have room to grow. There are no pesticides used out there, everything’s organic,” she said. “When it’s raining or too muddy we don’t go out but if it’s a nice day, we’re usually out at Bird Creek Farms.”

Red Corn said the current equipment they are using is surplus property from the Tribal Works Department, which includes a zero-turn radius mower and a tractor. They have also applied for numerous grants for green houses, farming equipment, and cover crop seeds and systems.

“We have used no pesticides out here at all. The fertilizers we are using are composted chicken manure and mushroom compost from Miami, Okla., mushroom farm,” Red Corn said.

They are hoping to receive grant funds for a BCS tractor, a versatile tractor that can till, shape beds, crimp mulch and perform other tasks needed for a market garden, Red Corn said.

For water they are currently tapping into the City of Pawhuska’s main water line on the property and are irrigating their crops as needed. They plan to do that for the next two years. But they are applying for a USDA grant to purchase and install an irrigation system that will filter the water out of Bird Creek onto the premises. Red Corn said the reason why the water needs to be filtered is because efficient drip irrigation systems can’t tolerate sediment or suspended organic matter in the water.

“Short term we will have some increased cost but we’ve done the math and long term, we’re better off irrigating with city water for a couple of years and qualifying for a permanent irrigation system after that,” Red Corn said.

If they are granted money for green houses they hope to plant greens, tomatoes, cucumbers and other mixed warm and cool weather crops.

He said with any piece of property or plan, there is going to be some trial and error. Knowing that they have employed several individuals to give them free advice, such as Steven Bond of the Intertribal Agricultural Council, Osage tribal members Henry Ben Harrison and Joe Hall. Bond and Hall brought their BCS tractors to help them plant corn and they got a great amount of work done in a very small amount of time, he said.

They are doing their best to implement a system that has been proven by the Kerr Foundation in Poteau, Okla., which relies entirely on natural and organic methods for raising market crops, Red Corn said.