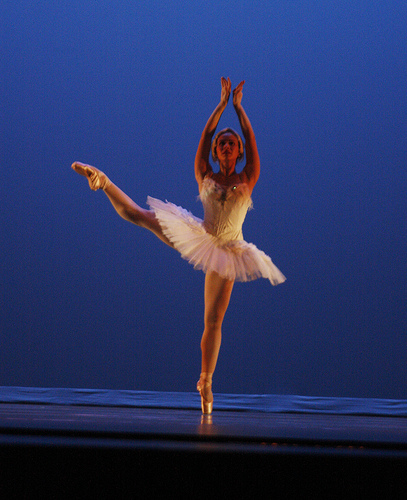 Many young people have dreamed of following in the footsteps of famous Osage ballerinas, Maria and Marjorie Tallchief, by becoming ballet dancers themselves. The Dance Maker Performing Arts Academy in Pawhuska is helping them achieve their dreams.

“Wahzhazhe,” which featured local dancers, was well received by local audiences at the Tulsa Performing Arts Center, the Bartlesville Community Center and at the Smithsonian in Washington, D.C.

Jenna Smith, who choreographed “Wahzhazhe” in 2012, is the Academy’s Director of Dance. As part of her formal training, she attended the University of North Carolina School of the Arts her freshman year of college, as one of only eight students accepted that academic year nationwide. She completed a Bachelor of Science degree in dance performance at Oral Roberts University in Tulsa in 2011.

Following the success of “Wahzhazhe” choreographer Jenna Smith, and her mother, Director Randy Tinker Smith, wanted to do more.

Describing their vision, Jenna and Randy Smith said they founded the Dance Maker Performing Arts Academy so that they could offer opportunities for dance education, not only for Osage students, but to all of rural Osage County.

“We saw a high level of interest in Osage County, and wanted to cultivate and nurture ballet talent as our way of carrying on the legacy of America’s first Prima Ballerina, Maria Tallchief, and her sister, Marjorie Tallchief,” Jenna Smith said.

Opened in September 2014, the Dance Maker Performing Arts Academy offers ballet, tap and jazz dance classes to students of all ages and all levels of expertise.

However, not every student who requests instruction can afford to pay for these classes.

The academy operates on a non-profit basis and the cost of classes is kept to a minimum, Smith explained.

To maximize the number of students who can participate, Dance Maker Performing Arts Academy has established a scholarship fund for its students. Scholarship donations, made through the Arts and Humanities Council of Tulsa, are tax deductible.

Due to donations from individuals and businesses, the Dance Maker Academy has made a good start, but more is needed for them to continue.

“We are grateful for donations from George and Carol Tinker, Charles Wickstrom and Iron

Hawk Energy, the Osage Nation Foundation, Osage Nation Prevention, Kerr Foundation,       Will and Anne Baker, Michael and Bette Graves, the Pawhuska Community Foundation, Enbridge, Majella O’Brien Gallant, Kanji and Katzen, PLLC, Kelci and Cindy Pickering,       Lou and Rosie Brock, and many others; we are looking to expand our program to serve all of the students who would like to attend the Academy,” Randy Smith said.

Dance Maker Academy has a sister program at St. Martin in the Caribbean. Art Saves Lives Foundation is a cross-cultural exchange between youth in need and experienced practicing artists who seek to use their talents for positive change. Each summer the foundation coordinates a Summer Intensive which caters to over 100 children. Dance Maker would like to send three of their students to be part of this program this summer.

“Our goal is to raise $2,000 per student so that they may be part of this incredible opportunity,” Randy Smith said.

The recital will be held at the Constantine Theater in Pawhuska on May 29 at 7 p.m. Admission is free.

To support these young people through the scholarship program online, you may go to www.dancemaker.net, or mail donations to the Arts and Humanities Council of Tulsa, 101 E. Archer St., Tulsa, OK 74103 with Dance Maker in the memo line of your check.

To enroll for the Academy’s Summer Camp or classes for the upcoming academic year, call Randy Smith at (918) 704-4668 or email her at dancemakeracademy@gmail.com.