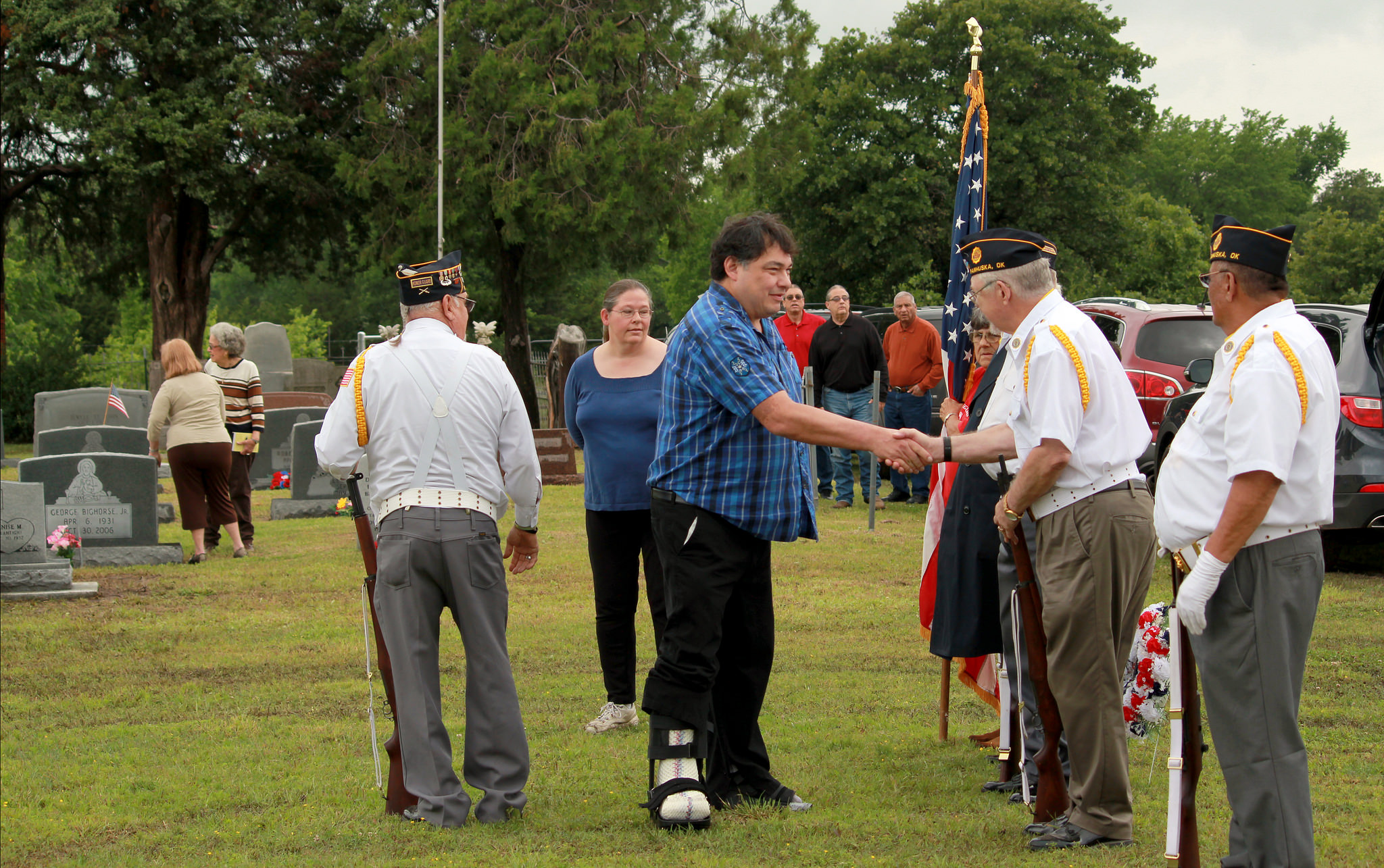 William St. John has fulfilled his great-grandmother’s wish: the Pierce St. John Cemetery has been expanded to its full one-acre capacity.

On Memorial Day, May 25, St. John addressed his family, friends, visitors and community members at the cemetery. Following his address, the Harold Bigheart Smalley American Legion Post 198 performed a gun salute to honor all the fallen veterans.

“This is it, what she envisioned. She never got to see it, just a little part of it, but this is what she sold to the government to allow everyone to be preserved here in case land gets sold in further generations,” St. John said. “You can take pictures here but it doesn’t really give a full effect unless you’re standing here, seeing this.”

In 1918, WWI veteran Pierce St. John and his wife Opal set aside one acre of their land for a cemetery, specifically for Native American veterans to be buried there. At the time Native American soldiers could not be buried in national cemeteries because Native Americans didn’t become U.S. citizens until 1924.

“I went to the BIA [Bureau of Indian Affairs] and asked for a copy of the [ordinance] and it was signed May 28, 1935,” he said. “I took the ordinance to a company that surveyed this out. What you’re seeing here is the exact one-acre she sold.”

He raised funds to build a fence and included three new entrances to the cemetery for better access as the cemetery expands. The cemetery is located southeast of Pawhuska just off the intersection of Highways 11 and 99. Prior to the expansion the cemetery was 40 feet by 50 feet and at full capacity with 54 burial plots. Now, St. John hopes there will be enough room to bury veterans for the next 50 years. The cemetery will turn 100 in 2018.

Dana Sellers, who is a great-granddaughter of Pierce St. John, was at the cemetery on Memorial Day with her family and said in her youth she and her brothers would help their father Carl Sellers take care of the cemetery by mowing and fencing off the property. Now that she’s older and her father, mother and some of her brothers are buried in the cemetery, she’s grateful the cemetery has been expanded.

“This cemetery means a lot to me and my family,” she said, and when asked about the expansion she said, “This expansion is wonderful.”

Visitors of the cemetery stopped St. John to speak about the history of the cemetery and how they had been coming to the cemetery on Memorial Day for decades and wanted to bring their children to see it, even though they did not have a relative buried there.

“People come every year, from all over. We used to have a State Representative come out every year and lay a wreath in front of the Doughboy,” St. John said. “Everyone’s welcome to come see and participate.”

“This is my Thank You for allowing this to happen,” St. John said.