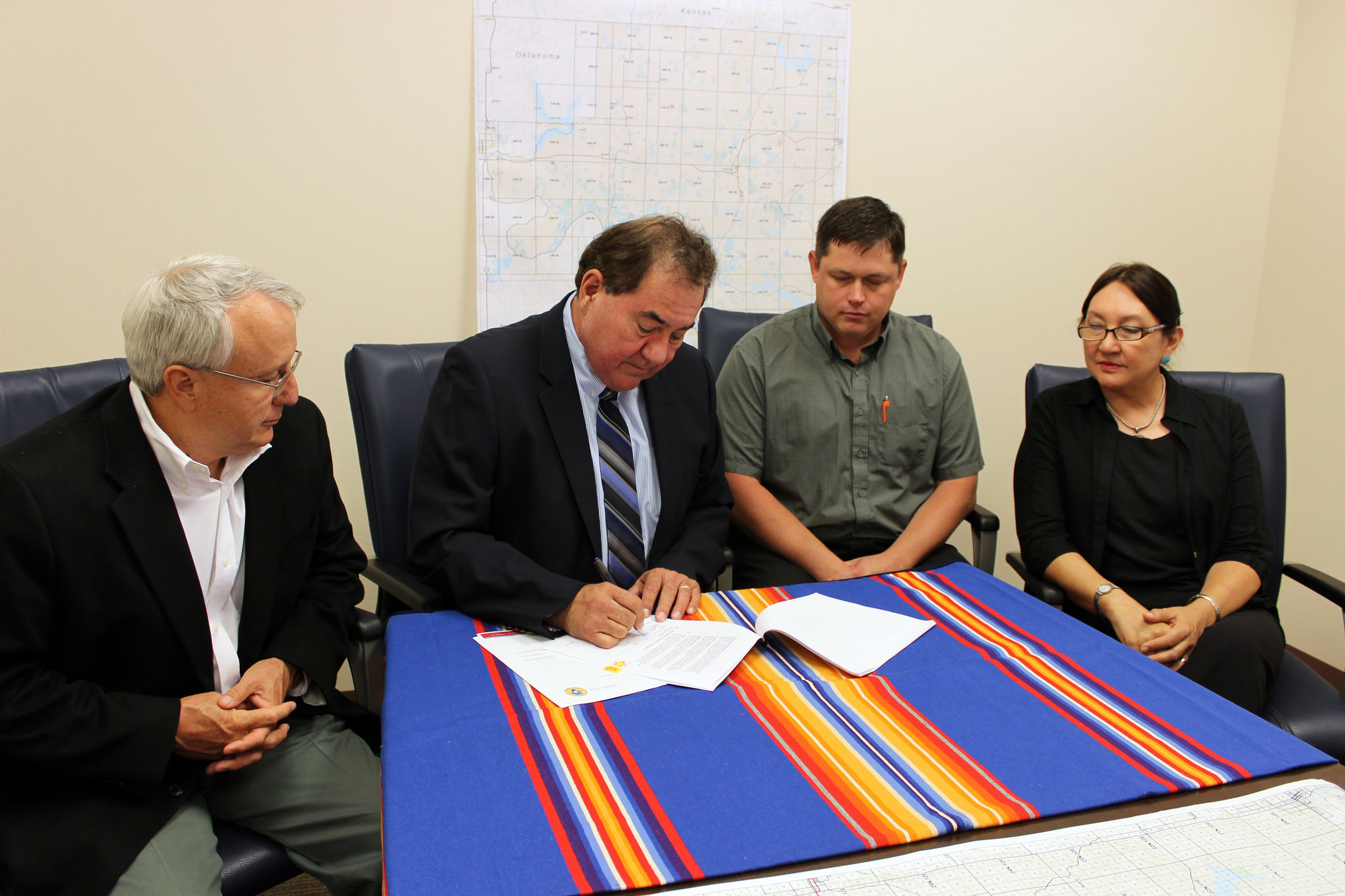 “The offers won’t go out till August, so we’ll have two months of outreach,” Standing Bear said.

The agreement, signed on May 26 at the Pawhuska Business Strategy Center, gives the Nation $119,288 for outreach efforts. This will include town hall meetings, mail outs, advertisements, three short-term positions, and a social media push designed to notify restricted landowners of the opportunity to sell their land interest, said Bruce Cass, Tribal Development and Land Acquisition director. Cass, along with Osage attorney Terry Mason Moore, is spearheading the Nation’s efforts.

The buy-back program is a stipulation of the Cobell settlement which provided $1.9 billion to purchase fractional interests in trust or restricted land from willing sellers at fair market value within a 10-year period, according to a U.S. Department of Interior release.

There is roughly 66,000 acres in the Nation with 680-690 individual landowners eligible for the program. However, due to the limited amount of money the Nation expects to receive to purchase the land, the Nation will only be contacting those landowners who own parcels of land in which the Nation also owns a fractionated interest, Standing Bear said.

Those eligible for the buy-back program are individuals who own an interest in a parcel of land with multiple owners. There must also be a clear land title, and all estates in probate will not receive offers. The BIA has already been working to identify those individuals eligible for offers, Cass said. A majority of the fractionated land lies in the southern part of Osage County.

“The problem is we’re only receiving enough money to purchase somewhere between, and this is an estimate, 5,000-6,500 acres,” Cass said. “So we’ve got to really try to narrow down those priority tracts.”

Cass said they expect to receive anywhere from $5 million to $7 million, which is enough to buy roughly four percent of the fractionated interest in the Osage.

“I’ve been looking at the maps, I’ve targeted certain parcels that fit in with the tribal plan we’ve submitted,” Standing Bear said. “It will be land that has good agriculture value and it is not commercial property. It is land that is grasslands, prairie lands, and we’re trying to find them as close together as possible.”

The Office of Appraisal Service for the buy-back program has been performing appraisals to determine fair market value, as well as land appraisers from the Osage BIA Agency.

Cass said it is very important for restricted landowners to make sure their contact information is up to date with the Office of Special Trustee and the Land Buy-Back Call Center because all offers will be mailed.

The Osage Nation ranks 37th in most fractionated land interests, with more than 38 percent residing in Osage County with the majority aged 50-60 years old.

Fractionated land interest is when an undivided parcel of land has more than one owner and they all own the land together. In worst-case scenarios an undivided parcel of land could have up to 50 owners, as a result of the probate process of allotted land left to heirs. The original parcel of allotted land given by the government to 2,228 individual Osages in 1906 was 657 acres, roughly 1.5 million. A century later a majority of the land is in the hands of non-Osages.

Landowners can contact the Trust Beneficiary Call Center at 888-678-6836 to update their contact information, ask questions about their land or purchase offers, and learn about financial planning resources. Individuals can also visit their local Office of the Special Trustee for American Indians (OST) or Bureau of Indian Affairs (BIA) office, or find more information at http://www.doi.gov/buybackprogram/landowners in order to make informed decisions about their land.