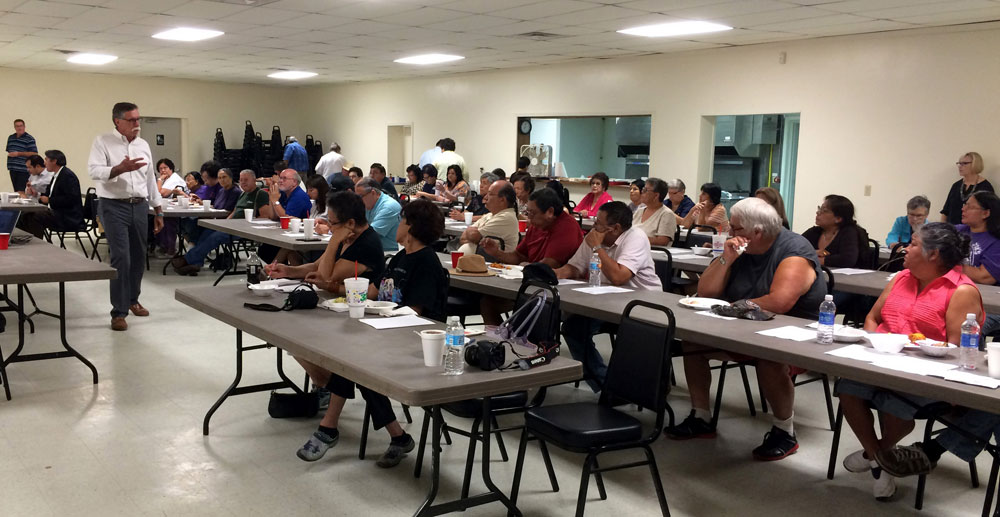 Osage community members from Grayhorse, Skiatook, Hominy, Grainola, Pawhuska, Ponca City, all turned out for a meeting on the status of the wind turbines in Osage County.

Hosted by Dr. Joe Conner, Osage, the group of more than 50 signed petitions for the Osage Nation government to act on Sept. 1 in Grayhorse.

Conner said the wind turbines are an invasion to the land and the negative effects impact the community, culture, historical sites, gravesites, eagles and the landscape. Former Principal Chief Scott BigHorse and community advocate Chris White, Shawnee/Delaware, spoke about strategies the Red Eagle and BigHorse administrations took against the wind companies, which included lawsuits, eagle protection, meetings with the U.S. Fish and Wildlife and Department of the Interior.

Emotions were high as people shouted and voiced concerns.

Wilson Pipestem, Osage/Otoe-Missouria attorney, said something needs to be done to change the apathy in the community and Osage government. He said a Protect the Osage Coalition was formed, made up of Osages, ranchers, landowners, and other interested parties. They organized a town hall meeting at the Constantine Theater in November 2014, had a great showing from a diverse population – haven’t met since.

“Our best hope, of actually getting those things torn down and letting the land heal is in that lawsuit,” he said.

The U.S. Attorney’s office recently filed for a preliminary injunction and expedited hearing in Northern Oklahoma District Court to stop the construction of the second wind turbine project called Mustang Run. The judge has not ruled yet.

Mustang Run will be located west of Pawhuska and have a proposed 68 turbines. The attorneys who helped convince the U.S. Attorney’s office to bring the lawsuit was fired by the Osage Minerals Council last week, said Pipestem, which elicited a collective groan.

“We need to get the attention of the Osage Nation government, they’re our leaders, they exercise the sovereign right of our Osage people,” Pipestem said. “That’s what our Constitution says. We act like we just have trust and restricted parcels, here and there, and we just have to pitifully only work in that area, I don’t believe that’s true.”

In January of this year, the Osage Nation did file a civil suit in the ON Trial Court against Enel Green Power North America, Inc., Osage Wind, and Enel Wind. The Fourth Osage Nation Congress also voted to extend jurisdiction in its civil code over all people within the reservation territory, as well as make it illegal to kill Golden or Bald eagles within the reservation territory. However, the Nation never served Enel with the lawsuit, Pipestem said.

Killing Golden and Bald eagles is a federal offense

On Aug. 12 the U.S. District Court for the Northern District of California in San Jose ruled the Department of Interior violated federal laws when they created a regulation allowing wind turbine companies to obtain 30-year permits to kill Bald and Golden Eagles. The plaintiff in the lawsuit, the American Bird Conservancy (ABC), said the U.S. Fish and Wildlife Service took improper shortcuts to develop the rule.

The ruling supports the Osage Nation’s argument that the turbines along Highway 60, north of Fairfax, are killing Golden and Bald eagles and are in violation of federal law. The wind company in the ABC’s case may appeal, but until then it is still illegal to obtain a permit to kill Golden and Bald eagles.

Jackie Badlee, Osage tribal member, said she has friends who have spoken to some of the workers on the wind turbine projects and the plan is to place 900 turbines in the area. Conner said there are farmers south of Fairfax who said wind developers have approached them about placing turbines on their property.

White said he sat in a closed Minerals Council meeting with the head of Tradewind, a wind turbine company, during the Red Eagle administration. He said the man from Tradewind laughed at the Minerals Council’s concerns and offered a paltry $100,000 to build the turbines.

“One of their main tactics is to divide your community, you saw that happen recently,” White said. “The very first wedge has been driven into that minerals council.”

For more information on signing the petition contact Dr. Joe Conner at (918) 642-3162 or email him at paradox@valornet.com.