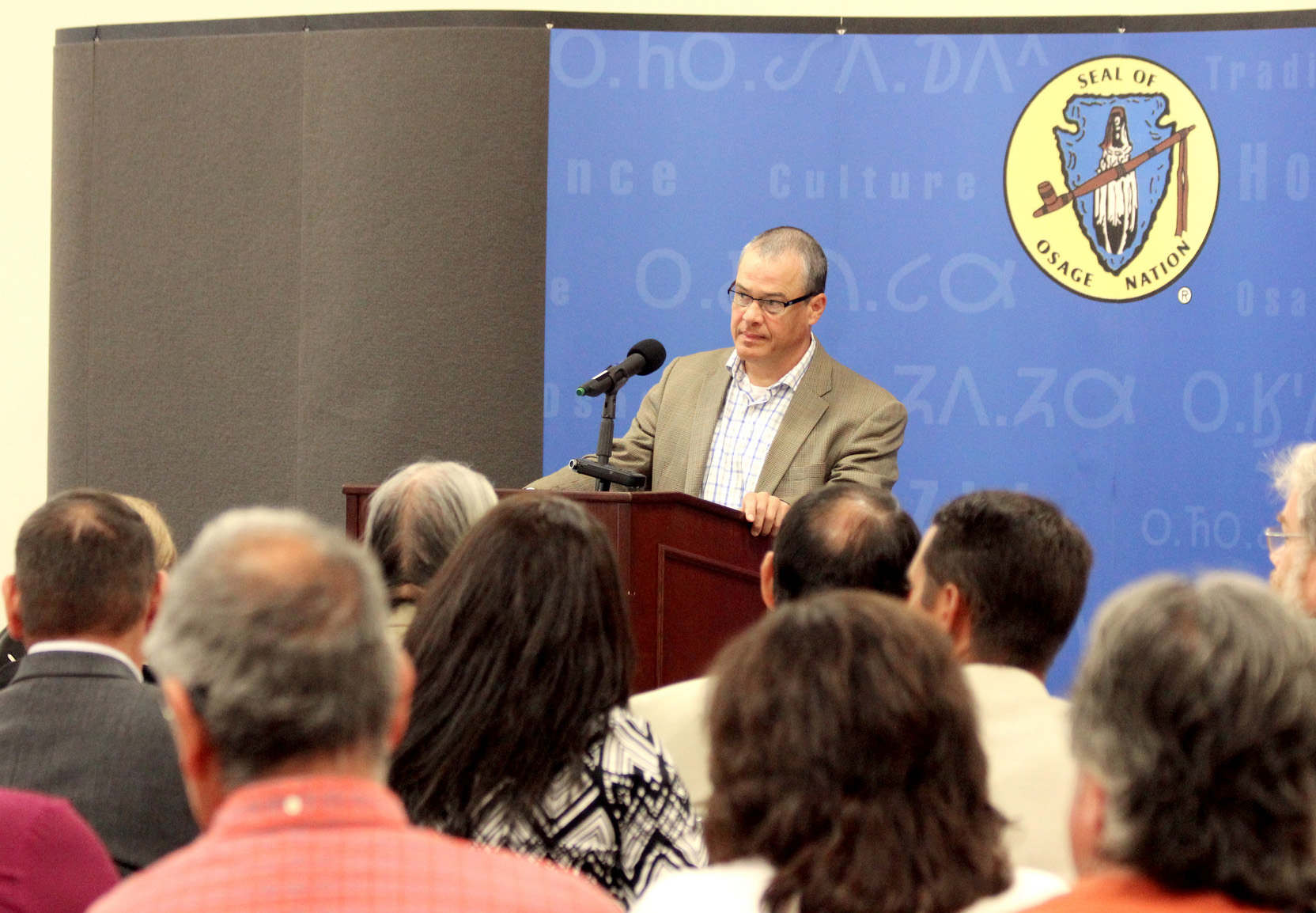 Bureau of Indian Affairs Director Mike Black told the Osage Nation the BIA is diligently working on improvements to the regulations of the oil and gas mining of the Osage Minerals Estate. He couldn’t provide much more due to pending litigation in federal court.

Principal Chief Geoffrey Standing Bear asked Black for his assurance the BIA would maintain the trust responsibility of the Osage Minerals Estate.

“I can assure you the federal government will maintain the federal trust responsibility to the Osage Minerals Estate,” Black said.

His assurance comes as speculation swirls around potential legislation from Sens. Jim Inhofe and James Lankford to take away the BIA regulatory duties of oil and gas mining and give it to the Osage Minerals Council to administer.

“What I want to see is the Minerals Council take over some of the BIA activities and forget the Corporation Commission of Oklahoma, let the Minerals Council take over and get funded with BIA money to do it,” Standing Bear said. “That means they’re going to have to start talking about self governance and compacting to go down that road, but that’s going to be their decision, not the chief’s decision.”

Standing Bear acknowledged taking over the regulatory functions of the Osage minerals estate would be new territory but he would not stand for the responsibility to go to the state of Oklahoma.

More than 50 people attended the meeting which was streamed live on the Nation’s website from the Pawhuska Business Strategy Center on Sept. 9. Osages, shareholders, oil producers, landowners and Osage officials from the Congress and minerals council attended.

Black began the meeting by giving a brief run down of the current lawsuits being fought in the Northern District Court of Oklahoma by the U.S. Attorney’s Office on behalf of the Minerals Council. The cases pertain to wind turbine construction and oil and gas regulations.

Black fielded questions and comments from the attendees, often turning questions over to his legal counsel Charles Babst. Many asked the director why the BIA didn’t act to physically stop the construction of the turbines along Highway 60. No definitive answer was given.

“I thought the meeting went well, although they didn’t share as much as I wish they could have – on the wind farms and on the federal regulations, they kept referring to matters in litigation they could not talk about,” Standing Bear said. “As an attorney who’s practiced in Indian Country for nearly 40 years, I understand how delicate that subject can be but I wish they could have said more.”

“It was very informative and I mean that, it was,” he said.

The next morning, Sept. 10, Standing Bear was informed that Black, Phillips and four solicitors met with the Osage County Cattlemen’s Association following the meeting with the Nation on Sept. 9.

He said he was surprised at that information since Black, his solicitors nor Phillips mentioned it to Standing Bear when they met briefly at the Osage Agency before the meeting at the strategy center on Sept. 9. He called Phillips and she confirmed they met with the OCCA at the OCCA’s invitation and declined to go into details of what was discussed.

The federal trust responsibility the BIA has to tribes goes back to the Articles of Confederation, treaties, the U.S. Constitution and the U.S. Supreme Court when John Marshall ruled tribes were sovereign entities, Standing Bear said.

“The key to this whole process is maintaining the trust responsibility and we have to focus on our main trustee, which is the U.S. Congress,” Standing Bear said. “There are all these other entities with the president that does this trust activity, but it is the duty of the U.S. Congress.”