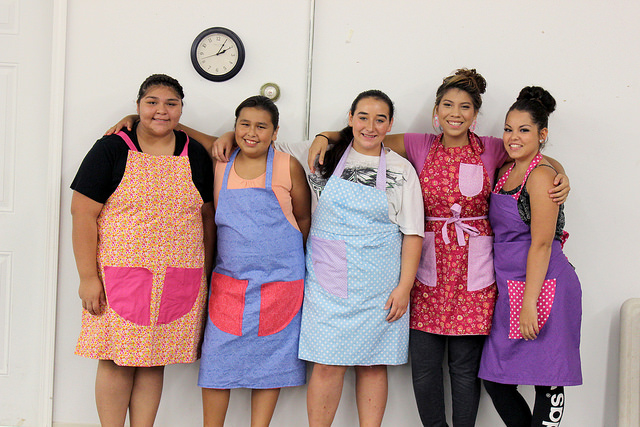 Osage Nation Prevention Program recognizes the importance of females within the Osage culture and worked with the Wah-Zha-Zhi Cultural Center to educate young women about the important roles women play within their culture.

Renee Harris and Rebecca Brave from the WCC worked the week of Aug. 3-6 with teen girls at the Hominy Village Community building in Hominy, Okla. They taught the girls that sewing and cooking is not only important but they are also fun.

“I want the girls to enjoy cooking as much as I do, and have some knowledge about kitchen and food safety and most importantly understand that blessing they will receive through the food they prepared,” Harris said.

The girls began by learning how to make frybread and corn soup because corn soup requires one meat. They were taught how to cut the meat for the soup and how to boil and put it all together. It was a simple meal and it also provided the class lunch that they helped prepare on the first day.

In the afternoon of the first day they were taught the basics of a sewing machine and sewing machine safety. They were able to pick the fabric they wanted to use for their apron they would be making. The girls were taught how to cut out the apron and to piece it together and then how to sew it on the machine.

“I believe it is very important to pass on these teachings from generation to generation because the children are our future! We must instill in them what it means and what it is to be Osage by teaching them our language, culture, and beliefs, so that our ways are not lost, said Peaches Hail, ON Prevention Program. “Every Osage needs to know their history!”

By the end of the first day the girls were able to run a sewing machine, make frybread and corn soup.

The second day of class the girls finished their aprons and since they were so efficient and worked fast paced they then began making a shawl. They prepared meat gravy and grape dumplings and fry bread for their cooking lesson.

The third day the girls learned how to prepare steam fry and Osage peaches and made frybread.

The final day the girls finished their shawls and cut meat and began preparing a meal for their families and friends to see what they learned all week. They had to set a table for a traditional Osage meal.

“These girls have done tremendous, they know what they are doing they have it going on,” Harris said. “I look forward to doing it again.”