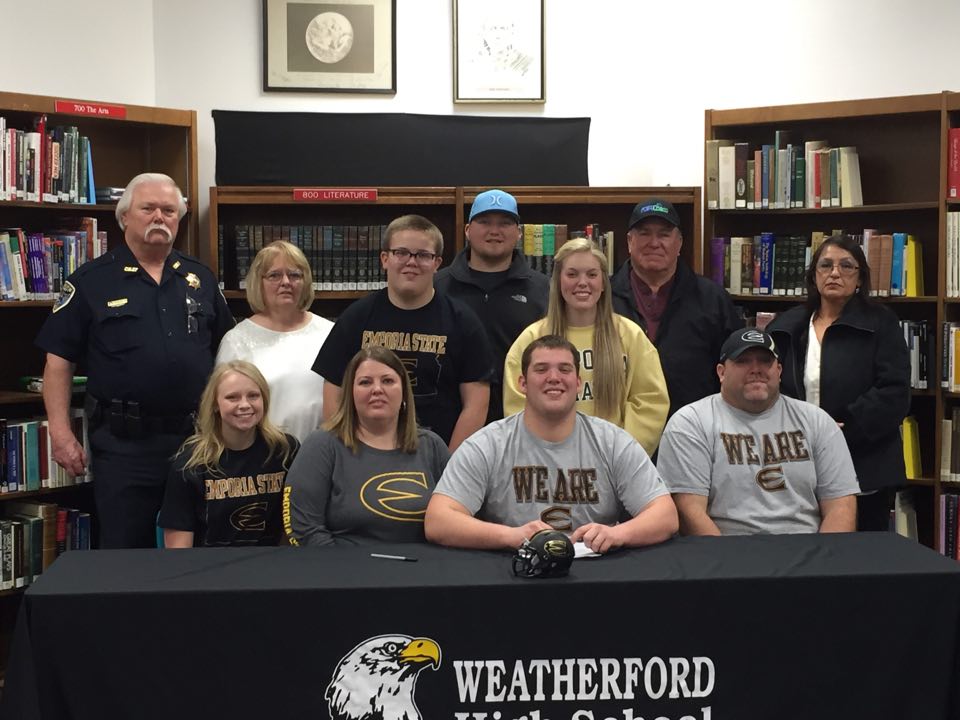 National Signing Day on Feb. 3 is a very exciting day for those talented high school seniors who will go on to further their educations and play collegiate sports.

Dyllan Beartrack Haworth is one such senior. He sat at a signing table on Feb. 3 surrounded by family to sign with Emporia State University. He is from Weatherford, Okla., and has played football for the Weatherford Eagles for the past four years. He is excited to begin his college career as a Emporia Hornet.

Haworth has played football since he was in the fourth grade. He also played basketball, wrestled, and ran track and field for the Eagles.

“Emporia was my first offer so they were my first choice. I got offers from Fort Hayes State and SWOSU and Oklahoma Baptist, but I feel like I made the right decision with Emporia State,” he said.

Haworth was named District 4A-1 Defensive Lineman of the Year, the Oklahoman All-State Honorable Mention, and Class 4A All-Star. His team advanced to the quarterfinal round of playoffs both his junior and senior years. In track, he has qualified for state in both disc and shot put every year of high school. He is a two time state runner-up in disc and two-time 3rd place state finisher in shot put. His personal records are Disc (174’9”) & Shot Put (54’6”). He was also named a Wendy’s High School Heisman State Finalist.

He maintained a 3.94 GPA and scored a 24 on his ACT. He is on the Weatherford High School honor roll and Oklahoma Honor Society. He has been student of the month and received the award of Distinguished Scholar and National History. He has been a district and state and national winner of Oklahoma Heritage Week and a regional and state winner as well. He has taken 16 honors/AP classes and will graduate with 24 hours of college credits.

In 2014 he placed second by writing for the National History Day contest titled “Osage Head Rights - A blessing or a curse?”

“We are extremely proud of Dyllan. He has worked very hard for this goal of his and to see it materialize is a blessing and an honor. Dyllan has a little bit of a medical issue that, when initially diagnosed, we were unsure if he would ever be able to play any sports so for him to receive a college scholarship in not one, but two sports is an amazing accomplishment,” said his mother Sharla Haworth.

He will play defensive tackle for the Emporia Eagles in the fall of 2016. He received scholarships for football and track from Emporia.

When he isn’t doing schoolwork or playing sports he enjoys hanging out with his family and friends, being with his girlfriend and working out. He also enjoys being outside fishing, hunting and working.

He is the son of Jonathon and Sharla Haworth and the grandson of Jeannie Beartrack from the Grayhorse District.