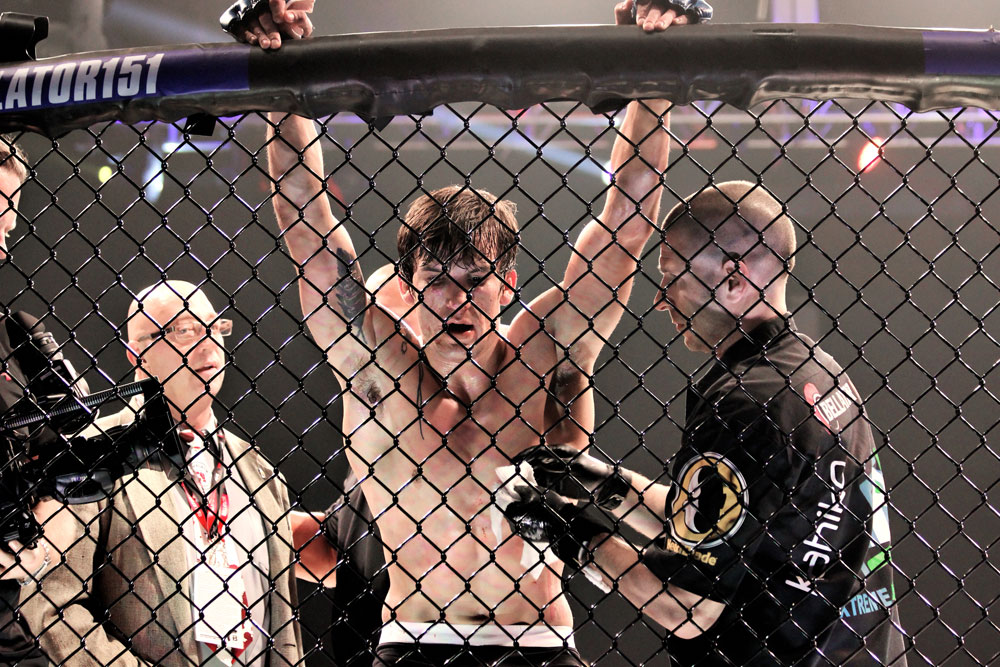 Rencountre loses Bellator fight after jaw is broken in first round

The crowd in the WinStar World Casino was stirring as they waited for the next MMA fight to begin. Chance “Black Eagle” Rencountre stayed relaxed before his fight, knowing he was surrounded by friends and family from Osage County.

“I like to keep my mind off the fight until it’s closer to start time,” he said in his dressing room. He was fighting in his first professional Bellator MMA fight, something he had wanted for a long time.

His fight was second in the lineup. As he walked out with his team behind him, they placed his banner on the cage and fans began to cheer.

“I love the fact Osages come to support me, as well as other Oklahoma tribes,” he said.

Rencountre’s fight took place on March 4, inside the WinStar World Casino in Thackerville, Okla. Rencountre signed to fight in the Bellator MMA circuit in January. Bellator, founded in 2008, is one of the best professional MMA circuits to fight in and it features “The Toughest Tournament in Sports,” which is a single-elimination tournament.

“I feel like there are several factors that go into it, like dedication, hard work, sacrifice, my professional fight record, and having a large following of fans in Oklahoma and Kansas,” he said. “That made me a good prospect for the Bellator promotion.”

Daniel Banner, Rencountre’s coach, does all the research on his upcoming fights. After watching films on his opponent, they begin to work on his strategy for the fight.

The beginning of the first round had Rencountre swinging at his opponent and delivering a couple of good hits to Justin Patterson. During a wrestling throw in the first round Rencountre felt a sharp pain and ringing in his ear. “I knew immediately that something was wrong after a blow to my face.” He could feel the whole right side of his face had a tingling and numb feeling to it.

Despite the injury Rencountre continued on with his fight and went into his second round. The points for both opponents were close, but Rencountre knew something was seriously wrong with his jaw from the first round. He continued on and kept his focus on the prize.

Going into the third round, his coach assured him everything was looking good but he needed more head movement and faints. The fight was close in points and Rencountre wanted to take the fight to his opponent. Even though he was in pain, Rencountre refused to quit and gave it his all.

As the fight came to a close Rencountre lost by split decision.

“I broke my jaw,” Rencountre said. Immediately following the fight he went to the hospital and was examined. But, even with the injury Rencountre came back to the event center and thanked his fans for coming out to support him. Win or lose his fans were very proud of him. Doctors had initially wanted Rencountre to be out for the next six months before he could fight again. Rencountre said he would need for his jaw to heal fully in order to fight again which will probably be midsummer.

Rencountre said everything was going so well for him in 2016 and he would like for it to end better. “My mom wouldn’t want me to give up on my dream.” Rencountre’s mother Connie passed away just a few days after his fight in Thackerville.

He loves the support he receives from his Native people. “It feels good every time I get to fight in Oklahoma because that’s where all of my family and friends are,” he said. “I would like to thank the Iowa Tribe of Oklahoma for believing in me and supporting me. I especially want to thank all of my family and friends that have supported me and helped me get to this point, and the Osage News for always following my career.”

“The Iowa Tribe of Oklahoma is very honored to have the opportunity to sponsor Chance,” said Iowa Tribal Chairman Bobby Walkup. “The Business Committee sees this as another way to support Indian Country, and we think that it’s a good thing for the Native youth to see what he’s doing. We are very happy and excited to watch his progress and be able to support him as his career is taking off. Go Black Eagle!”