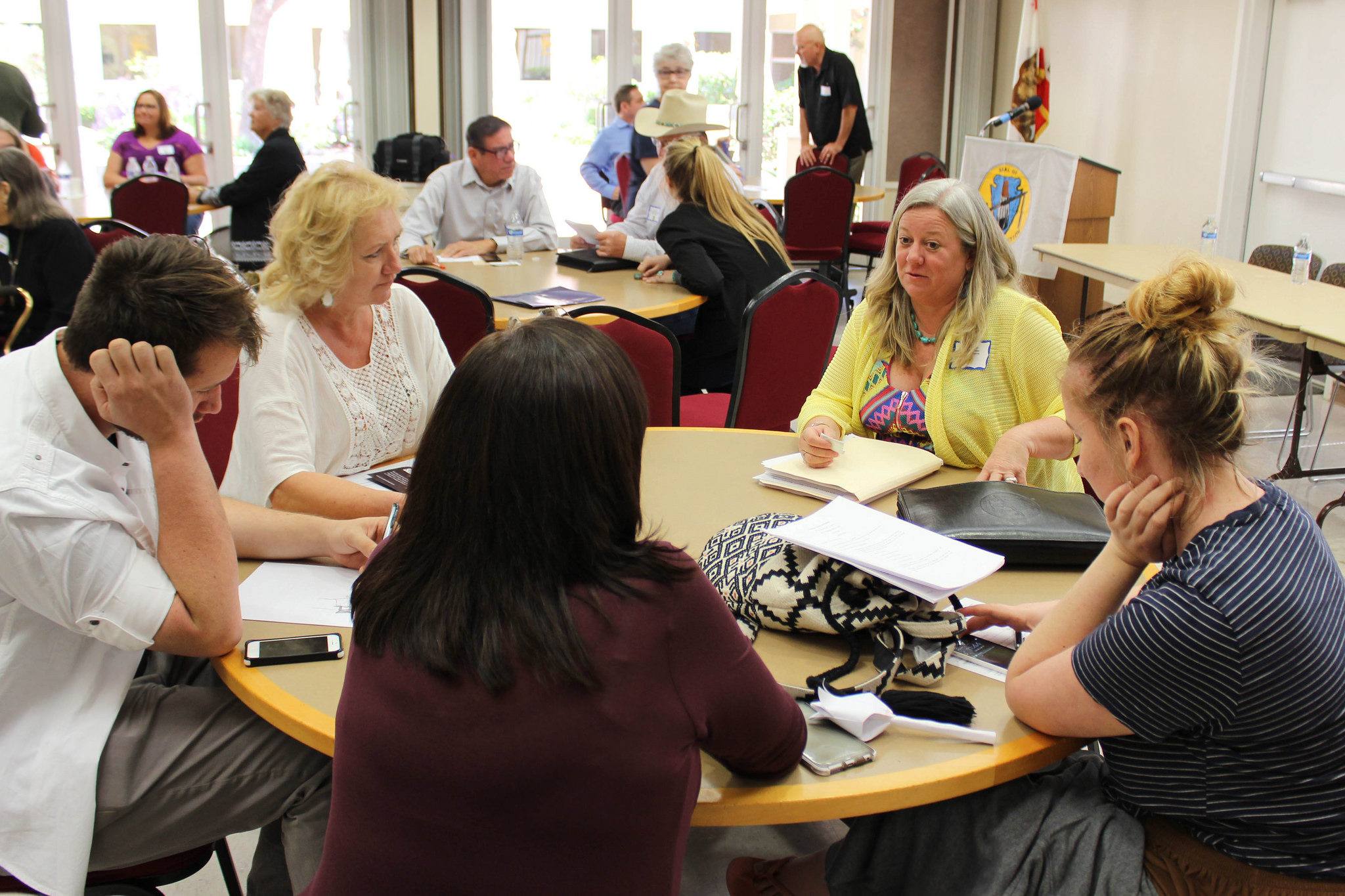 The United Osages of Southern California held its annual spring gathering on April 23 at the Carlsbad Senior Center and drew Osages from the San Diego and Los Angeles metro areas. That day, over 80 people, including candidates and Osage residents and family members, gathered to hear the 2016 election candidates speak during a forum that day.

UOSC Chairman Greg Clavier and his family organized the day’s event and moderated the speech time for the candidates. Each person was allowed 10 minutes at the venue‘s microphone to share their platform, reasons for running and accomplishments. Clavier and his family wrote the candidates names on pieces of paper and randomly drew the names from a bowl to determine the speaking order as follows.

John Maker is seeking a second term in office and said he’s always looked to Pawhuska as the Nation’s capital. “When I’m up there, I am representing everyone in this room and everyone back home and wherever there’s Osage people living throughout the United States – they deserve everything that our government can do for them and assist them.”

Addressing the constituents, Maker said “I am running for re-election, we’ve done a lot of work in the last four years, it’s been a very good experience for me to be on the Osage government.” He also encouraged the attendees to get more involved with the Nation and to contact him if they have a “great idea that can help us.” He touted the Nation’s higher education scholarship program that is “very good for our people” and an example of helping take care of Osages and the Nation’s future.

Michael Bristow, a licensed speech-language pathologist who works with geriatric patients, is a first-time Congressional candidate and said his platform includes providing more for Osage elders. “The problem is the needs of the elderly are great … they need more than their families can provide, some need 24-hour care. If elected, I will propose legislation that the tribe needs to establish a skilled-nursing facility that is owned and run by the tribe,” he said.

Bristow cited the current political climate in Oklahoma, which includes proposed cuts to Medicare/ Medicaid, as a reason the Nation should pursue its own facility to take care of its own and that facility could be training spot for Osage students interested in healthcare. Bristow also praised the Nation’s scholarship program for funding his bachelor and master’s degree education and said he is interested in proposing a monthly stipend for scholarship recipients to help them offset other living costs.

Maria Whitehorn, currently the Congressional Speaker, is seeking her second term and spoke about her accomplishments including serving on a water rights task force and as the chairwoman for the Congressional commerce and economic development committee and the governmental operations committee, which receives the most work during the legislative sessions, which gave her “a good overview of what we have at the Nation, how it works, the money it takes to run each (department/ program).”

Whitehorn also said the Nation “needs to get better at expanding our tribal sovereignty and by taking a look at our water rights and by asserting ourselves in certain areas with the Department of the Interior.” She said other remaining business includes property acquisition because “the more you expand your land base, the more territory you have sovereignty over,” as well as other lands surrounding the Tulsa Osage Casino for more economic development.

Shannon Edwards is seeking her third Congressional term and said the Nation, as a young government, needs to work better on budgeting tribal government funds to avoid seeking additional spending requests and funding during the spring and special sessions. “In the past, we’ve been asking our ‘sugar daddy’ – our bank, as I like to call it, the Gaming Enterprise – to give us more revenue … This year, we took in an additional $20 million of revenue above what the Gaming Enterprise provided us in the fall and the year before that, we took in $6 million in additional revenue,” she said.

Due to the recent Bluestem Ranch purchase and five-year loan to pay it off, Edwards said it’s more important the Nation “keep our spending within our limits – the bank is closed.” In seeking re-election, Edwards said her priorities will include the scholarship program “because it changes the lives of every single one of us” and the health benefit card program and said, “It’s going to be critical that we spend our money wisely.”

RJ Walker is seeking his second Congressional term and said he’s seen the Nation come a long ways in terms of growth in a decade, which he’s seen both as a Congressman and a former Roads Department director for the Executive Branch. “I want to ask that you consider voting for me because I do believe I am able to work with the Executive Branch … I do believe that the recent Supreme Court ruling has redirected our focus and that focus needs to be more to early childhood learning.”

Hank Hainzinger, a second-time Congressional candidate, was born and raised on his family’s original allotment in western Osage County and said he’s the fourth generation in his family to make a living off ranching the land. He said: “I’m running for Congress to try and fill the void … We just purchased the Turner (Bluestem) Ranch and we’ve got the EcoPark farm, we’ve got the Freeman Ranch … I’m running to be the voice of agriculture on Congress.”

“Right now, the (Osage) casinos (make) about 90-plus percent of our income, who knows where the casinos will be in 30-40 years? ... The future’s endless in the world of agriculture … We’ve got the option to raise our own food for some of our kids in our education programs with the EcoPark and our garden ... I’ve always been told ‘If you take care of the land, it will take care of you,’ but what sets me apart is my passion for agriculture,” said Hainzinger who said his motto is “Osage land in Osage hands.”

Joe Tillman is seeking his first Congressional term. A youth sports coach, Tillman previously served as ON division leader for the Nation’s cultural and education divisions. Acknowledging the Nation’s language efforts, including the immersion school, Tillman said: “We’re working on our language, but our culture is alive and well … if the federal government ever wants to see our culture, come on down to the first Thursday in June for the In-Lon-Schka in Grayhorse (village).”

Tillman said his campaign platform emphasizes the use of “we” and not “I” … “It’s we and it’s us and it has to be us, we’ve got many, many issues facing us as we go forward … We’ve got to open our minds to economic growth, casinos are saturated in Oklahoma … We better separate ourselves somehow, look at diversification for economic growth and development. That comes from the people in this audience, we need your help to think beyond the boundaries … I will serve all Osage people wherever they may be.”

Former Osage language instructor Rebekah HorseChief is seeking her inaugural Congressional term also. She is pursuing a master’s degree focusing on Indian law from the University of Tulsa law school, and said her studies “have groomed” her for office. “I’m everything you want to be working for the Osage Nation, I’m a strong woman who’s educated, who participates, who wants to come back,” HorseChief said. “Invest in me so that I can vest in the Osage Nation.”

HorseChief said she supports other business initiatives or studies to see if they are feasible including a dialysis clinic. For outside ventures, HorseChief referred to the Osage Limited Liability Company losses, totaling over $17 million. “I think there needs to be some accountability for the people who allowed that to happen, that’s money that we’re never going to get back … It’s time to invest in the people you’ve invested in, my tribal dollars are your tribal dollars … The vote that you’re casting is a vote for me to be in this elected position to make good decisions for everybody.”

Archie Mason, a retired Tulsa Public Schools education professional, is seeking re-election to a third term. He served as the first Congressional Speaker and recalled the early days when officials at that time had the challenge of setting up the newly reformed government offices. “My thought was to try and get this in order, as an Osage, you know we live by that,” he said.

“We have to have order, if it gets out of order, we tend to have some problems come up,” Mason said. “We’re at a place in Congress where we can birth a law, we come up with an idea, we might and think that it’s a good idea for the people, but we’ve got to ask the people ‘what do you think about this?’ … We don’t necessarily want it to be my opinion, my thing, it’s got to be for all Osages … I’ve served you, the people, the best I can for 10 years, I want to continue to be in that position, I’ve seen a lot, there’s lot yet to be done.”

Fi Davis is seeking Congressional office for the first time. He introduced himself, stating he’s been the Nation’s Food Distribution program director for 22 years after writing the Nation’s first grant to establish the program that helps families in need. “There are a lot of things that I think qualify me to be a part of this Congress.” Davis said the Food Distribution program is available to all Native Americans in the Osage County service area and operates on a budget, which brings in $400,000 in federal funds.

Davis also serves on the Nation’s Employee Protection Council, which hears employee disputes of performance evaluations. “We listen to what they say, how the evaluation was done, if they think it’s wrong, and I was elected (by fellow ON employees), so I feel like I’m qualified to ask you to vote for me on this Congress,” Davis said. In the past, Davis served as a Wenoshe (whip man) for the Hominy In-Lon-Schka dances, which helps keep order during the annual June dances.

Clavier said the UOSC plans to have a fall gathering on Saturday Nov. 5 with the location and meeting agenda to be determined later.