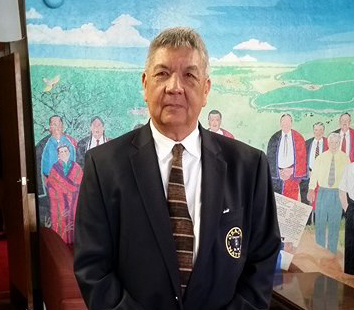 Dale Jesse hired as ON Congressional Sergeant at Arms

Dale Jesse is the new Sergeant at Arms for the Osage Nation Congress who started his post on April 12 during the Hun-Kah Session.

Jesse (Creek/ Seminole) retired from the Bureau of Indian Affairs - Osage Agency earlier this year after 15 years. He will work for the ON Congressional Office in the part-time post at the Chambers building – next to his old BIA office on the government campus in Pawhuska.

The sergeant at arms position is required to work during the two regular 24-day sessions held annually with the Hun-Kah Session in spring and Tzi-Zho Session in fall. In addition, either the Congress or Principal Chief may call the Congress into a special session at any other time – with a 10-business day advance notice. Special sessions may last up to 10 days and all sessions may be extended by three days, if needed.

According to the sergeant at arms job posting, “The primary role of the Sergeant-At-Arms, is to enforce order and decorum for members and all individuals present at a session/meeting, and execute demands at the direction of the presiding officer, including contacting Congressional members to return to session following recesses.”

Jesse retired from the BIA’s branch of Subsurface and was a Petroleum Engineering Technician. He processed drilling and workover applications for all of Osage County and also worked for the Field Operations branch as a PET-gauger. Also, at various times throughout his career at the agency Jesse served as Acting Superintendent. He has 40 years of oil and gas field experience; and 25 yrs with Occidental Petroleum formerly Cities Service Co.

Jesse is a member of the Osage Gourd Clan, speaks Osage and Seminole and served as a fireman for Hominy District.