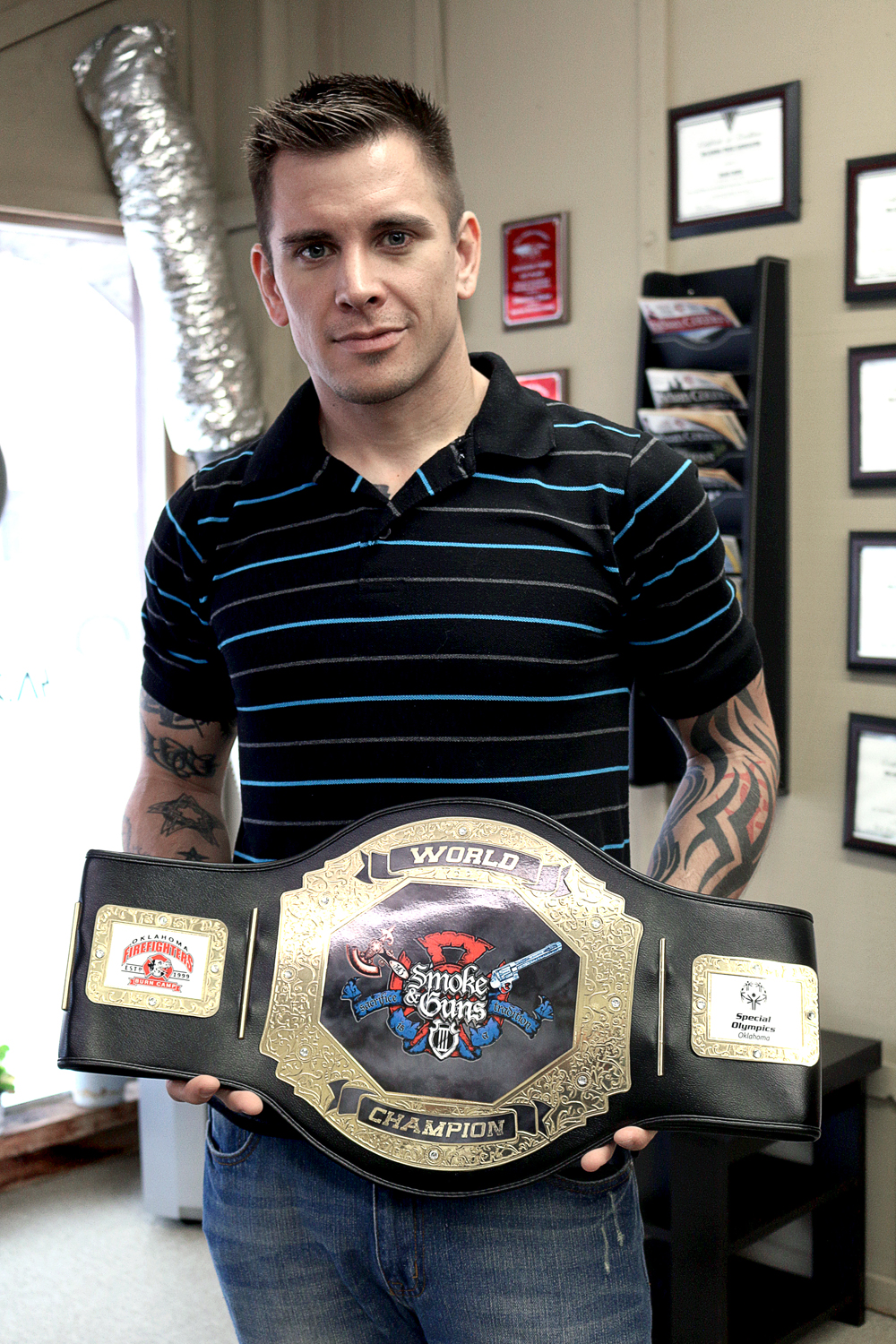 Robert “Sweet Dreams” Willard has been with the Osage Nation Police Department for two years and participated in his second fight night at the “Smoke and Guns” charity event.

“Smoke and Guns” is a nonprofit charity event where the state of Oklahoma’s firemen and police officers battle it out in a Mixed Martial Arts and boxing contest. The event is held to raise money for Oklahoma Firefighter Burn Camp and Special Olympics of Oklahoma.

Willard first heard of the event while listening to a local radio station. He called and got a spot in the 2015 event. He trains at the Small Town Scrappers gym in Tonkawa with trainer Josh Waffle.

He fought in the event for the first time in 2015, training only four months, he said. He fought against Fireman Nate Kragel of Sapulpa Fire 170. They fought till Kragel scored a third round technical knockout of Willard.

“Robert is just now discovering his abilities in MMA, his speed is improving, his power is developing and he can see his progress and I hope he is happy with his journey so far,” Waffle said. “He has done a great job of balancing work, family and training.”

Willard continued training and went back to the 2016 event and came out a winner. He fought Fireman Quan Hoang from Tulsa. He won with a standing TKO and left with a Championship belt.

The event was held in Tulsa at the BOK Center on Saturday, April 30, with 15 firemen and 15 policemen from Oklahoma competing. The final outcome of the event was Smoke 7 and Guns 5, with both winning money for their charity. The police officers won 10-5 out of 15 fights and won $21,000 for Special Olympics and won $14,000 for burn camp

Oklahoma Firefighter Burn Camp helps children who suffer major burns and other traumatic injuries that cause disfiguration and disabilities. The camp helps teach them how to cope with their injuries.

Special Olympics Oklahoma is a year round sports training and athletic competition in a variety of Olympic type sports for children and adults with intellectual disabilities, giving them opportunities to develop physical fitness and demonstrate courage and experience the joy of participating.

“I watched his fight via live stream this year. He has a lot of passion and heart and I am very proud of him. He worked hard and went back again. What impressed me was he was not doing it for personal gain but for charity,” said ON Police Chief Nick Williams. “I am very proud of all Native people who have a passion for the sport.”

Willard, 29, is from Newkirk and Blackwell. He is a member of the Kaw Nation and has served in the Army Reserves for five years. He said his biggest inspiration was his Uncle Joe Kekabah for joining the armed forces and going into law enforcement. Williard has been married to his wife Kristi for 10 years and has two daughters. He got his fighting name “Sweet Dreams” from the tattoo of a dream catcher on his arm.

His next fight will be in July at the First Council Casino in Newkirk. To learn more about Smoke and Guns visit their website at: http://www.918fullyinvolved.com/