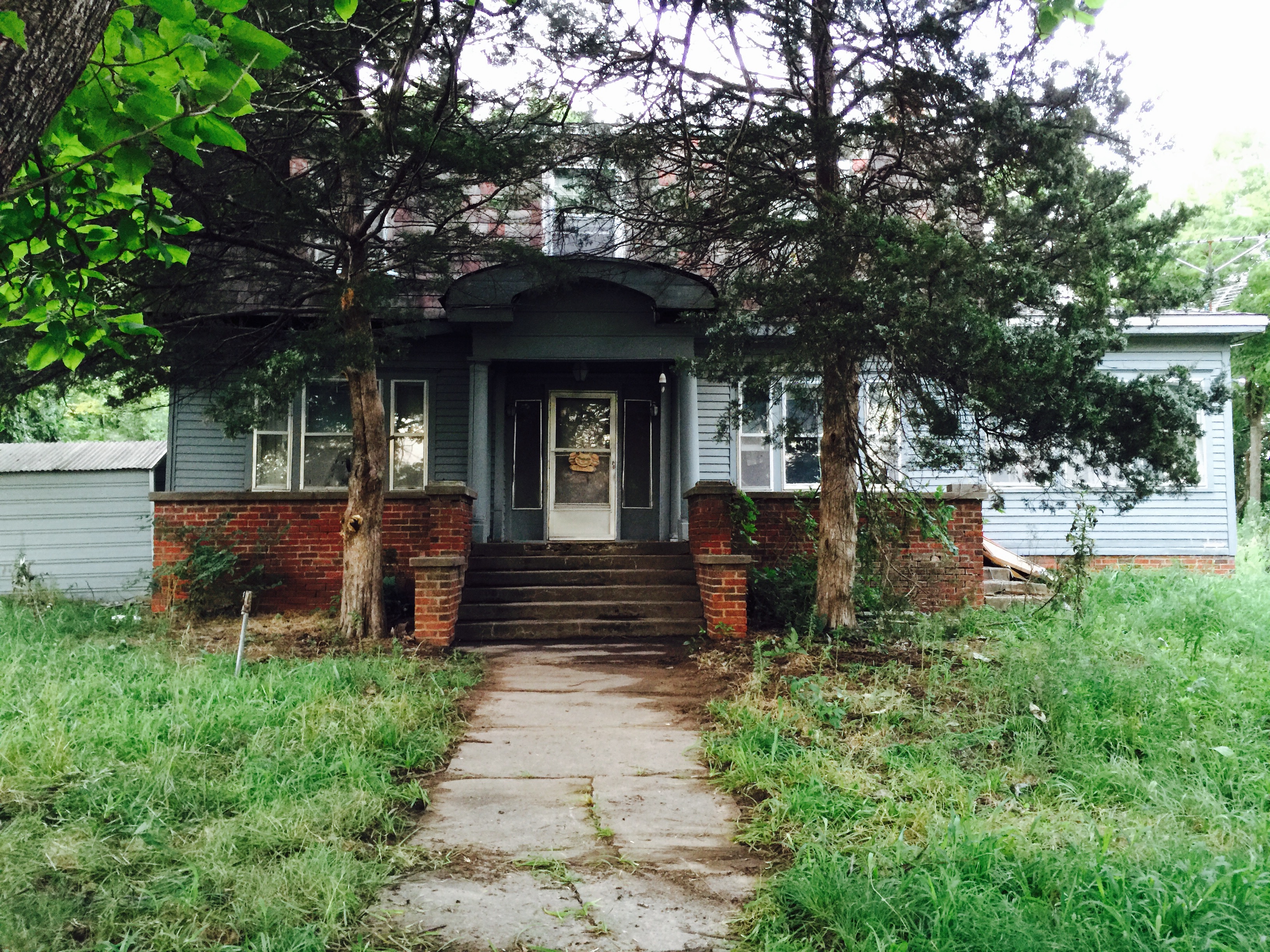 After his father’s death in November of last year, Wilhelm Murg, Jr. became the sole heir to his Osage mother’s estate.

Located southeast of Pawhuska off of Highway 99 on 12.6 acres of restricted Indian land, sits a large two-story house, “the first home to have a swimming pool in Osage County,” he said. His mother, Virginia Ruth Wolfe Murg who died in 2001, had inherited the home from her mother who had bought it in 1934. She left it to her only child, Wilhelm.

He currently lives in Tulsa where he has written for Indian Country Today Media Network, Native American Times, and the Oklahoma Gazette, among many other publications and is preparing to launch his own Native Multi-Media Network this fall. He rarely visits Pawhuska and does not have plans to move back. He found out his father died after a friend texted him, “Dude, I’m sorry I didn’t know your father died.”

“I typed back, ‘I didn’t either.’ I was kind of shocked so I started calling up the Osage Agency, and as I was calling the Agency I got a call from the Realty department by a woman named Oobie Winlock. I asked if this was about my father’s death?” he said. “She said your cousin Cynthia has put a bid on the house.”

Murg’s first cousin is Osage Minerals Councilwoman Cynthia Boone. Their mothers were sisters. He said they do not have a relationship and he hasn’t spoken to her for over 20 years.

“I explained that as Cynthia has been mean to me my whole life, and has attempted to backstab me a few times ... I would never do a business deal with her, period,” he said. “I was not selling the house to her regardless of what she offered.”

He found his mother wandering on the highway shortly after and he took her to the hospital. She died not too long after in a nursing home in Barnsdall where she had “bed sores, dehydration and malnutrition.” He later successfully sued the nursing home and took the case all the way to the Oklahoma Supreme Court and won. The nursing home quickly settled with him.

Years passed and there was no communication between father and son. So it was a shock to him when he finally returned to the family home to find it practically in ruins – and most of his family belongings gone.

Before he died, his father had named Michelle RedCorn as his Power of Attorney. RedCorn is Wilhelm’s second cousin, her mother Margaret RedCorn is Boone’s sister. He said he and RedCorn spoke at length about his father’s last years and she told him that Cynthia Boone and her family had been taking items out of the house for years.

While in town he visited his longtime friend Sean Standing Bear at his house. While visiting with him he saw something familiar. It was his Velvet Underground poster from his youth. He could tell it was his because he had made the frame himself. Standing Bear said he had bought it at the local pawnshop in town.

“It started with the poster. I figured whatever had been stolen from the house was a loss. The guy at the pawnshop said I could look through his stuff,” Murg said. “My mother had an enormous diamond ring, I don’t know where it is … everybody knew about it. My mother really did have some nice jewelry.”

Time went by and the Agency offered the estate to the Osage Nation but they declined. They then appraised the house, standard procedure, said Osage Agency Superintendent Robin Phillips.

He said an appraisal put the worth of the house at $40,000. Eight months passed since the starting process, and no buyers. Tired of waiting for the Agency to sell the property, he hired a realtor by the name of Ashley Crawford who worked for Keller Williams. She got to work.

Crawford confronted Boone about the break-ins and Boone said it was most likely Michelle RedCorn, not her. Murg said he had given RedCorn a key.

“It’s heartbreaking to see the property in its current state and know that Wilhelm tried to fight for the property but lost, and now that he finally does have the property, family members (Osages) are wreaking havoc on it,” she said. “I had an investor who had come back for a third showing, and once they saw the home had been broken into and sensed there was some sort of drama surrounding the property, they decided not to submit an offer.”

Crawford put a For Sale sign on the property. Lynn Holloway, an Osage Agency employee in the Realty department called Murg, he said.

“I get a call from Holloway and she’s demanding, insulting, I have no right to do this, and I have no right to do that and I can’t get a realtor because the land is in restriction, it’s just insanity. I got tired of her abusing me and I said she didn’t do anything, lied to me, was totally ineffectual, and yes I desperately needed a realtor and I should add that anyone else in this situation trying to sell Indian property, they need a realtor. Don’t trust the tribe,” he said. “My house would have sold to Cynthia for $25,000 if that had been the case.”

Murg called Phillips and wanted corrective action done on Holloway and he thought Boone and Holloway were acting in concert together. He said Phillips told him that Boone had mentioned the For Sale sign in the yard of the home to her at a Minerals Council meeting.

“It wasn’t actually in the meeting itself, but while she was attending a meeting she said there was a sign out there on the property now,” she said. “People have the right to put up a sign, so I didn’t act on that and we didn’t do anything when she said that to me.”

Murg said her statement confuses him because if she didn’t care about the For Sale sign in the yard then why did Holloway call him about it and why was she agitated when she called him?

Phillips said she and Holloway both informed Murg that if he gets a realtor then the realtor needed to work with the Agency because there were certain steps in order to take the land out of restriction. Crawford had worked with the bureau before and she knew what to do. She said it was all standard procedure.

“I don’t know what’s going on with Mr. Murg but he’s upset with everybody. But that’s it for Mr. Murg and we want everything to go smoothly for the sale,” she said. “He’s been ugly to the Agency and to the people.”

The good news is Crawford sold the property to a Pawhuska resident two weeks ago.

When asked how much the house sold for, Murg said he would rather not say but it was considerably more than what the federal government had it appraised at.

The Osage News filed an open records request with the Osage Nation Police Department, requesting all police reports and information pertaining to Wilhelm Murg, Jr. More than 50 pages police reports, court records and descriptions were contained within. The reports about theft of the estate began on Oct. 22, 2015, before Wilhelm Murg, Sr. died.

Tonya RedCorn called the police on Oct. 17, 2015, requesting a police officer come to the Murg property and act as a civil standby while she took furniture and other items out of the home. She said the elder Murg was her uncle and he said it was okay for her to take the property. He was in an assisted living facility in Bartlesville at the time and Officer Holleman instructed her to call a lawyer to assist him with the situation.

On Nov. 19, 2015, Michelle RedCorn called the police and said she had missed a meeting with the younger Murg at the estate because she fell asleep, according to the police report. She said his truck was “heard” at the property and she was unsure of whether he took a truckload of items out of the house (Murg said he has never owned a truck). She said she was the elder Murg’s Power of Attorney and brought the documents to the police station. Officer Holleman informed RedCorn that her Power of Attorney was void upon his death and that the younger Murg was the owner of the estate.

Murg filed an ethics complaint on Boone to the Osage Nation Attorney General’s office on July 28, alleging she abused her status as a councilwoman by instructing Holloway to harass him and “for taking a bid on my house before he was dead. She (Holloway) kept insisting that I did not need a realtor, while never doing anything to sell it to anyone aside from Cynthia: obviously, I needed a realtor.”

The AG’s office sent a letter to Murg on Aug. 1 that said due to the pending ethics court case against Boone and other OMC members in the Osage Nation Supreme Court he would have to wait before court action could be taken. The letter said an investigator was assigned to the case and found “that an investigation was warranted” into Boone’s alleged misconduct.

Boone said she had no idea Murg had filed an ethics complaint on her and no one from the AG’s office or police department has contacted her about it. She said she never put in a bid for the house and she didn’t know the house was appraised at $40,000. She said her family would never break into a house. She said she didn’t want anything of Murg’s.

She said she did email Phillips about the process of taking land like Murg’s out of restriction and what that takes, she said she only inquired because a situation like Murg’s could come up again in the future and she would need to know how the process worked. She said Phillips was leaving for a few days and gave her email to Richard Winlock, Oobie Winlock’s husband. She said she was preparing a complaint on Richard Winlock because he told Crawford that Boone was trying to cause trouble with the sale of the property.

“I don’t know why but this has really gotten out of hand,” Boone said. “I did not put a bid on the Murg property for $25,000 … I don’t want anything of theirs. He’s just trying to pin the rap on somebody and it might as well be me.”