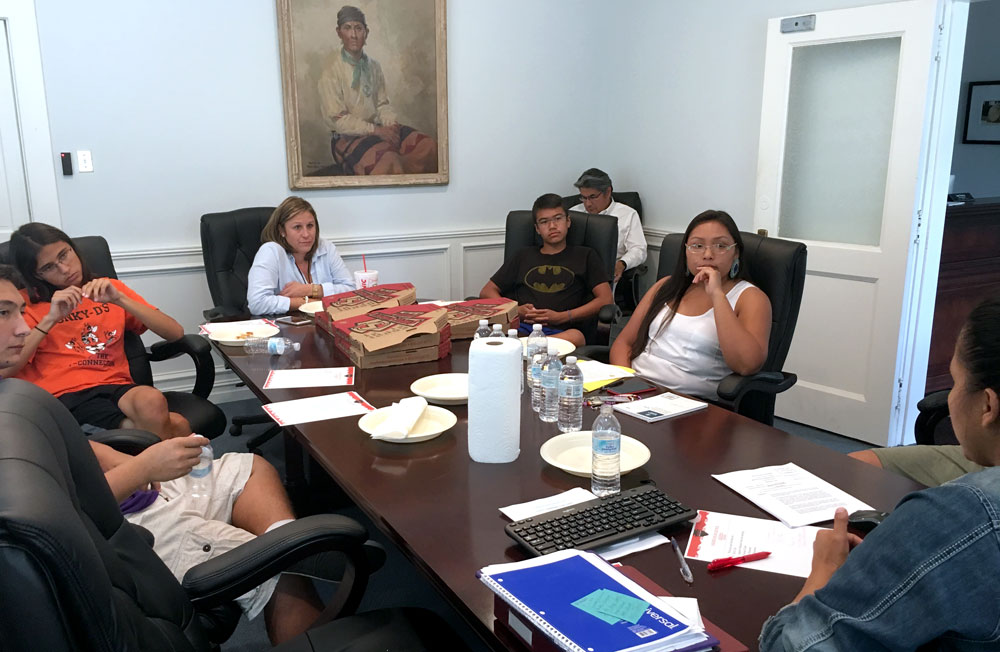 The Wahzhazhe Youth Council is holding a rally Saturday in support of the Standing Rock Sioux Tribe’s fight against the construction of the Dakota Access Pipeline through their reservation. The rally will be held on the Osage Nation Campus, between the Osage Nation Museum and the Congressional chambers in Pawhuska.

The event, Native Oklahoma Stands with Standing Rock Rally, is an effort to raise donations and awareness of the DAPL and the potential harmful effects it could have for those living on the Standing Rock reservation, located in North Dakota. It is also a way for the Osage youth to show their support for the Standing Rock Sioux Tribe’s sovereignty and water rights, said Wahzhazhe Youth Council (WYC) President Alaina Maker.

Construction of the DAPL has been temporarily halted by the protest that has drawn over a thousand protesters from Native American tribes across Indian Country, and garnered national media attention.

“I felt compelled to do this because I felt as a youth I needed to do something to show I support all Natives in their fight to be sovereign and choose things for their own reservations,” Maker said. “I know we do have oil on our own reservation and we have accepted royalties, but just because we made that choice doesn’t mean we can’t support other tribes and be there to support them in whatever decisions they make.”

The WYC consists of 13 members and met Aug. 30 at the Executive Branch offices in Pawhuska. Present at the meeting were WYC Vice President Noah Shadlow, Treasurer Eli Red Eagle, and members Truman and Parrish Pipestem. The WYC finalized the agenda as follows:

Ericka Iron, Osage tribal member, is also accepting donations at the event. Her “Fill Up the Trunk” event will coincide with the rally and she will be leaving for the Standing Rock reservation around 3 p.m.

Maker, 22 and who currently works for the Wah-Zha-Zhi Early Learning Academy developing cultural curriculum, said they are working on renting a U-Haul truck to take any additional items donated on Saturday.

The WYC meets every first and third Tuesday of the month at 5:30 p.m. at the Executive Branch offices in Pawhuska. Members must be 14-24 years old, Osage tribal members and be willing to organize, plan and participate in community projects.

“The Standing Rock Sioux called upon other Nations to support them in their opposition to the Dakota Access Pipeline because it is an encroachment on their tribal sovereignty and poses a serious threat to their only water source on the reservation and the health and welfare of their people,” Pratt said. “As an Osage, I believe that the Osage Nation should answer that call, along with approximately 90 other tribes who have done so. Like the Osage, the Standing Rock Sioux Council has the responsibility to protect their people, land and resources, exercise their sovereignty and preserve the integrity of the environment for future generations and I support them in their efforts.”

According to the resolution, the Standing Rock Sioux Tribe is opposing the construction of approximately 1,100 miles of pipeline that has the capacity to carry 570,000 barrels of crude oil per day. It will cross the Missouri River, above the mouth of the Cannonball River on the reservation, the tribe’s main water source. A 2013 oil spill released some 840,000 gallons of oil upstream near Tioga, N.D. and a 2015 oil spill released 51,000 gallons of oil into the Yellowstone River upstream from Glendive, Mont., resulting in the shutdown of the community water system for 6,000 residents, according to the resolution.

“The Osage have a historical connection to the Missouri River as it was a source of life for us and allowed us to continue to exist, which is what the Standing Rock Sioux have a right to. Indian people are too often disregarded as if they are saying ‘I dare them to say or do something,’ such as when the pipeline was rerouted from Bismarck, N.D. to a half mile from the reservation,” Pratt said. “So just as movements like Idle No More call upon us as Indigenous people to do - we need to say and do something to support one another in holding agencies accountable and protecting the inherent authority of Tribes, sacred lands and natural resources. Seventh Generation and the National Congress of American Indians policy agenda, First Kids 1st, both summon us to live and work for the benefit of future generations. That’s what this is about.”

[Editor's Note: This story was updated on Sept. 1 to show the change in location of the rally.]