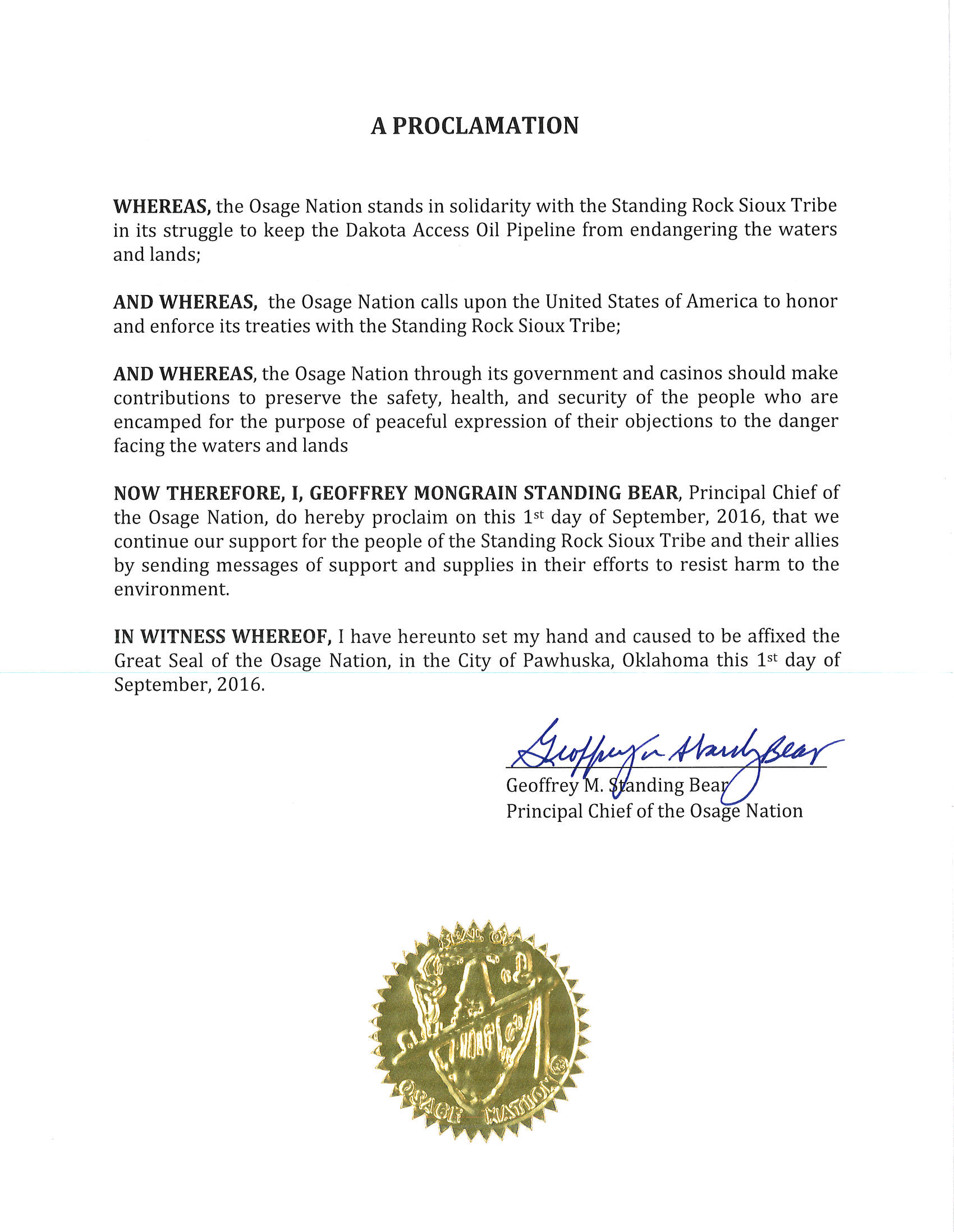 Osage Nation Principal Chief Geoffrey Standing Bear has issued a proclamation in support of the Standing Rock Sioux Tribe in its fight against the Dakota Access Oil Pipeline.

He said he began working with Osage Casinos in sending supplies to the Standing Rock Sioux people and their families last week. He is in full support of the Wahzhazhe Youth Council’s Native Oklahoma Stands with Standing Rock Rally. The rally will be held Saturday on the ON campus from 10 a.m. to 7 p.m.

“We are also taking any food, blankets or other donations to the Standing Rock Sioux that may be donated at the rally,” Standing Bear said in an email today.

The Sioux at Standing Rock have been seeking – for more than two years – meaningful dialogue and consultation with the U.S. Government, the U.S. Army Corp of Engineers and the local pipeline ownership to look to responsible stewardship of nature, the Tribe’s cultural lands, and safety for water the community residents and area wildlife need on their reservation, according to a news release.

“The Osage Nation supports the people of Standing Rock who are protecting the land and waters,” Standing Bear said. “People everywhere should think hard about the priorities of our society.  Should the earth be used up by the human race or should we respect the limits of the earth?”

Items the Nation has shipped to those camped at Cannonball River include: 720 blankets, 72 all-weather heavy-duty flashlights and batteries, and 100 hand-held flashlights with batteries. More supplies will be coming from the Nation and Osage Casinos.

Osage News photographer Chalene Toehay-Tartsah will be accompanying the delegation to Cannonball, N.D. to the Standing Rock Sioux Tribe’s reservation. Osage citizens are welcome to join the delegation in their private vehicles but the Osage Nation will not be transporting individuals. The delegation will leave at 8 a.m., Monday, Sept. 5 from the ON Campus and won't return until Friday, Sept. 9.

Check back with Osage News for updates and full coverage of the trip.