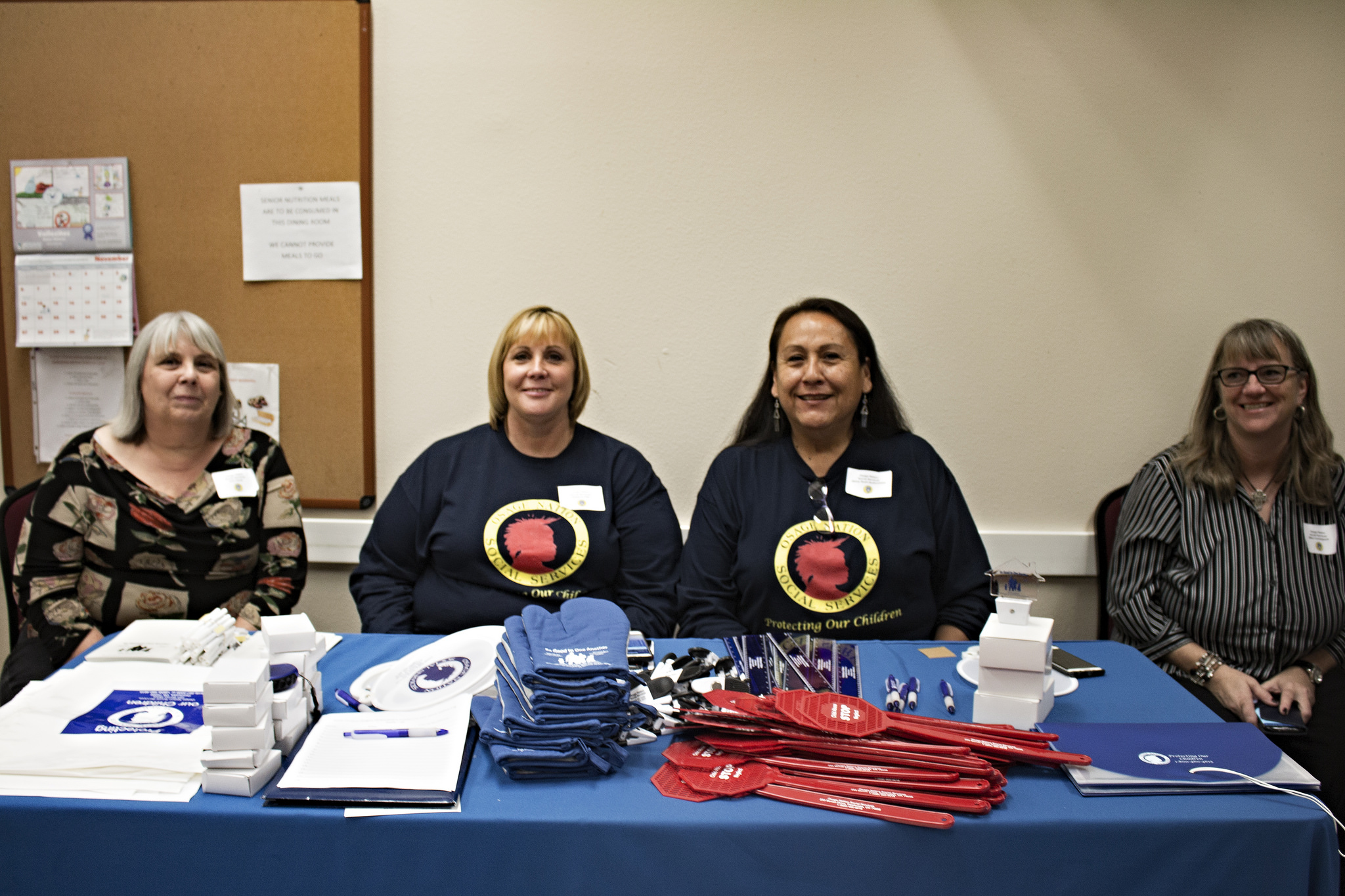 UOSC Chairman Greg Clavier said 88 attendees came to the Nov. 5 event, which included 55 UOSC members, 17 family guests and 16 Osage Nation dignitaries and employees who visited from Oklahoma. “We are very happy with the results of the UOSC 2016 Fall Gathering. It was a very busy day, however well received,” he said.

Orange County resident Jeanette Guerrero described her recent trip to Osage County, which included participating in the annual Cultural Walk organized by the Wah-Zha-Zhi Cultural Center. The October event is an overnight camping trip and invites Osages and their families to take a three-mile hike from the present-day state border, south into Oklahoma where the Mullendore Ranch sits near the northern edge of Osage County.

“I really encourage all of you to take that journey as well,” Guerrero said. She also praised other Osages who went on the trip to provide the camp meals, to coordinate the trip and those who shared their historical and cultural knowledge with the attendees.

Guerrero acknowledged ON Education Department worker Cherise Lookout for her contributions in attending the trip with Wah-Zha-Zhi Youth Council members.

“I think the Cultural Walk provides a way for Osages to get to know each other and share stories and histories that reflect our Osage people’s strong and culturally powerful ways,” Lookout said. “It is awesome to see Osages that live within the local community attend and connect with those that live out-of-state, share stories, see their children play together and become friends. Our Osage children do not receive Osage education through a modern education system, nor through the public schools, most receive Osage education and history orally.”

The Nation is proceeding with gaining its former reservation back through land purchases, with this year’s historic 43,000-acre Bluestem Ranch purchase as an example, Standing Bear said. The next step is for the Nation to work with federal agencies in Washington D.C. to place the ranch lands into federal trust status. Standing Bear said he expects the process to be completed by next year.

Other statistics shared by Standing Bear touched on the Nation’s higher education scholarship program. According to a recent scholarship update, he said 1,068 scholarship applications were approved this fall semester with $3.9 million paid to fund those approved scholarships.

Congressional Speaker Angela Pratt encouraged the attendees to become more involved and engaged with the Osage government, which includes making sure mailing addresses are updated with the tribal government in Pawhuska to receive tribal information, the newspaper and especially information on voting in future ON elections.

Pratt said “I welcome you to contact us” and encouraged Osages who are military veterans to get in contact with the Nation to help provide data because the Nation needs to build and compile data on tribal veterans.

ON Social Services Director Lee Collins and fellow workers also attended and set up a booth to speak with attendees about foster and adoptive family opportunities to give Osage children homes and spoke about the importance of the Indian Child Welfare Act (ICWA) in keeping Osage children connected to their family and culture. Collins noted her office serves Osages nationwide and serves 175 children and 50 adults per year.

In addition to handing adoption and foster home services for children, Collins said her department also has adult protection services to investigate elder abuse/ neglect cases. “We’re dedicated 24-7,” Collins said of the department, noting the employees are on call since reports of abuse can occur at any time, prompting investigations.

Dr. Andrea Hunter, the Nation’s Historic Preservation Office director, also delivered a history presentation on the Osage and other operations of her office in consulting with various entities in the Osage ancestral territories before the tribe’s move into present-day Oklahoma.

Other ON officials attending the event included Congress members Maria Whitehorn, Shannon Edwards and Second Congressional Speaker Otto Hamilton who gave a presentation about this year’s Pawhuska In-Lon-Schka dances, which included a Paying for the Drum ceremony.

Los Angeles area resident Danielle Glenn-Rivera said she enjoyed Hamilton’s presentation and added she wished there were paper handouts and contact information for the attendees especially for those who do not have computer access. Glenn-Rivera also praised Collins’ presentation on ICWA as other attendees may not be familiar with its significance and components.

Attendee Teddy Myers praised Hunters history presentation and said “I’ve been telling my co-workers about how we are called Osage and where we come from. I finally have an answer to the most-asked questions about why we are called Osage. I have always wondered about that,” he said.

Former UOSC Chairman Bill Myers said he appreciates the in-person networking between out-of-state Osages and government officials. “I find that no kind of media can replace the value of a personal appearance of our elected officials.  When elected officials and candidates come to visit, I feel that they value me as an Osage,” he said.

The gathering event concluded with the traditional opportunity drawing for 50-plus gift items donated by the UOSC attendees which included books, artworks, music CDs, cooking utensils and kitchenware, gift cards and clothing. The attendees purchased ticket chances for the gift items and the winners are determined by ticket drawings. Clavier said the  raised money is used to offset UOSC meeting costs not reimbursed through the ON gathering fund.

In addition to the fall gathering, the UOSC also hosts a gathering meeting in the spring and will announce when the date is set. For more information on the United Osages of Southern California, email Clavier at socal.osages@gmail.com