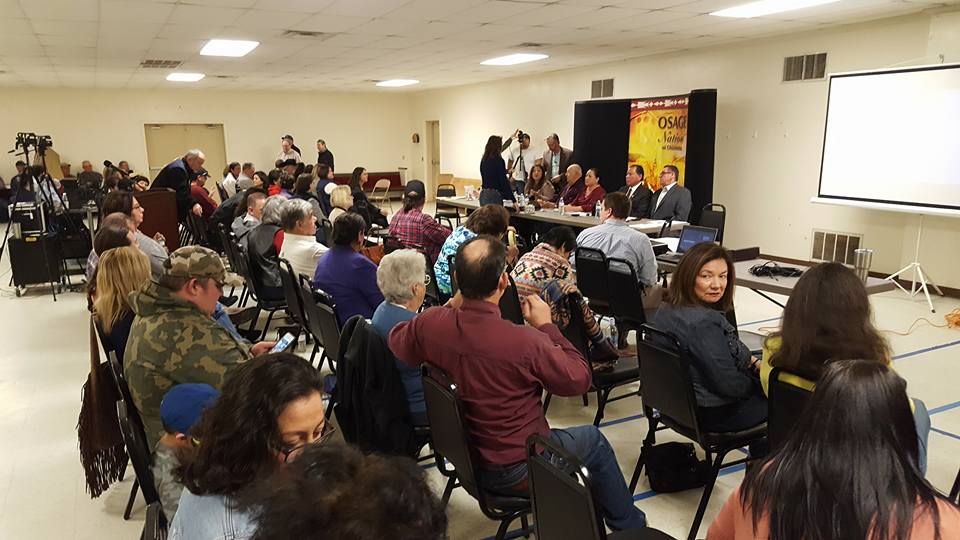 The Osage Congressional Commerce, Gaming and Land Committee held a public hearing at the Grayhorse Indian Village community building on Feb. 12 to discuss the latest developments with the Bluestem Ranch. There were more than 100 people in attendance.

When the Bluestem Ranch LLC board was appointed and confirmed, it was the understanding that the board would be managing the entire 43,000-acre ranch.

“We hope through this presentation, to explain why we feel the ranch needs to be under the direction of one entity and that entity is the Bluestem board,” said Congressman William “Kugee” Supernaw, who is chair of the committee. “We hope to show you that this has always been the desire of Congress, and why it is in the best interest of the Osage people.”

The Friday before the Congressional public hearing, a news release went out from the Chief’s Office announcing the award of three leases.

Receiving the leases was the Bluestem Ranch board, the Alred Family (Osage) and George Neff (Osage). According to the release, a Procurement Selection Committee worked for weeks to determine the finalists after a Request for Proposals was published in August 2016. There were 20 bids submitted for grazing leases, according to the release.

The selection committee consists of the Nation’s General Counsel Terry Mason Moore, Senior Advisor to the Chief John Williams, Tribal Development Department Director Bruce Cass and the Nation’s Human Resources Director Scott Johnson. Standing Bear said his staff made recommendations on who should be on the committee and he agreed.

Cass said the acreage awarded is approximate until lease negotiations are finalized. The selection committee evaluated proposals, rated and ranked them according to the Nation’s procurement process, and they sent award letters. He said the letters do not identify the total acreage awarded because there are still some variables that must be satisfied before the leases are signed.

“Each pasture or tract of land has different variables. Some of those tracts will have different lease rates than others. For example, a heavily wooded area may not lease the same per acre as an area that’s all pasture,” he said. “Until we have a lease penned down, we don’t have a precise amount yet [of cost per acre] because we’re going to evaluate them on a pasture-by-pasture basis.”

A date has not been determined as to when the leases will go into effect. Standing Bear sent a memorandum to the Osage Agency BIA Superintendent Robin Phillips on Feb. 16, asking her to clarify the leasing procedures. Two questions asked to her are whether the Nation must wait until the land is put into federal trust status before they can execute the leases, and, if the Osage Nation Congress must also approve the leases before they’re executed.

The Congress has made it clear since the purchase of the ranch, and the formation of the Bluestem Ranch board, it does not support Standing Bear making sole decisions concerning the ranch.

The relationship between the two branches has been fraying for months. Standing Bear filed an ethics complaint to the ON Attorney General on Congressman Supernaw in June 2016 for comments made in the Osage News about the ranch board. Congressman Joe Tillman (who also organized the Grayhorse public hearing) walked out of the Congressional chambers in December 2016, refusing to hear a presentation on the ranch from Executive Branch staff. Congresswoman Maria Whitehorn made accusations against Standing Bear on a popular Osage Facebook forum Jan. 6 that he made a deal with Texas-based Four Sixes Ranch and let them unload cattle onto the ranch. The AG dismissed the complaint on Supernaw and the accusation about the Four Sixes Ranch turned out to be untrue.

Whether there are more ethics complaints is unknown because the Attorney General’s office and Standing Bear’s office recently denied requests by the Osage News for a copy of all ethics complaints and their resolutions made by elected officials against each other in 2016, citing confidential and proprietary information. The Osage News asked the AG’s office just how many complaints were filed by elected officials in 2016 and no response had been given by the time this story was published.

Speaker of the Osage Nation Congress, Angela Pratt, began the three-and-a-half hour meeting with a power point presentation explaining the timeline of events leading up to the purchase of the ranch and the situation that ensued over who or what entity should manage the ranch.

“We did work a lot together and I think it was quoted that we were ‘one mind,’ and I’ll tell you that much, we weren’t one mind,” she said of the process to buy the ranch. “There was a lot of discussion and we didn’t agree on everything but we did dig deep and work really hard together.”

Supernaw said the Congress did not want to make another mistake like the Osage LLC, where the nation lost $18 million dollars. He said the Congress and Executive Branch agreed the best way to move forward with the ranch was to form the Bluestem Ranch LLC, a subsidiary under the Tallgrass Economic Development LLC (TED), and TED would have no say in the day-to-day management of the ranch.

Members of Congress agreed that Standing Bear stopped cooperating with the ranch board after the board stated they did not want to initially operate bison because research had to be done for best practices, adequate fencing had to be priced and researched, and they did not want to buy the leftover bison from Ted Turner because Turner wanted $840,000 for 440 head of yearling bison and the ranch board felt they could get bison for free by joining the Intertribal Bison Cooperative. At the time the ranch board had been appropriated $2 million.

Congresswoman Maria Whitehorn made a presentation on documents she has accumulated throughout the process that included emails from Standing Bear, Osage News articles about the ranch and ranch board, memos and other documents.

“I’m going to start off by saying that I’m so proud we own this ranch. It’s so meaningful that we could all get together and get this accomplished,” she said.

She said the situation involving Standing Bear isn’t about him specifically “it’s for that chief sitting in that chair 40 years from now, and for our children.”

The meeting was also the first time for some members of Congress to hear that Standing Bear is planning a bison preserve.

Congressman Ron Shaw said the Nation spent $74 million on the purchase of the ranch, and the Tulsa Osage Casino expansion will cost another $150 million. He said now is not the time to spend more money operating a bison preserve

“The chief is not trying to manage the Bluestem Board. After they made the recommendation not to buy bison, [Chief] has decided that he is the sole manager of the Bluestem Ranch, all 43,000 acres,” Shaw said. “I am very concerned about having the Executive Branch manage a possession that’s that large and that important to the Nation without experts, and I think it should be run by experts.”

The Bluestem Ranch board is made up of five Osage individuals with a vast array of ranching knowledge. They are Faren Revard Anderson (chair), Francis Murphy, Teresa Meade, Jackie Badley and Jim Perrier.

Anderson gave a rundown of what the board had planned for the 43,000 acres before they were told they would have to submit a bid for a lease. She was confident the ranch would have been self-sustaining in less than five years under their management.

“He’s using a law that we just passed called the Hearth Act. He’s saying that we can’t lease it to the board because of the Hearth Act, we’re going to have to charge them and charge them a bond. That’s not true at all,” Whitehorn said. “The Hearth Act is an act that’s passed for tribal governments to be able to utilize their property for their own growth and economic development.”

A member of the audience asked Whitehorn later if the Congress planned to sue the chief and she said “no” because they were already involved in two lawsuits with the chief and she didn’t think that was the best use of the people’s money.

Standing Bear said he is operating within the law and the Congress may not like it but the Osage Nation Supreme Court has ruled in his favor on the Separation of Powers issue once already.

“We have an internal difference of views as to which groups will have responsibility to manage this land … I am confident that we will ultimately arrive at a conclusion that manages this land in a responsible way so that we can protect it for generations to come,” he said.

Standing Bear said he has suggested a 20-year management agreement to Board Chair Faren Revard Anderson to manage the bison preserve.

“The private rancher bids are strong and are by successful Osage ranchers. They did propose higher payments to Osage Nation but the proposals were very comprehensive and included proper care of the land which is a priority matter,” he said.