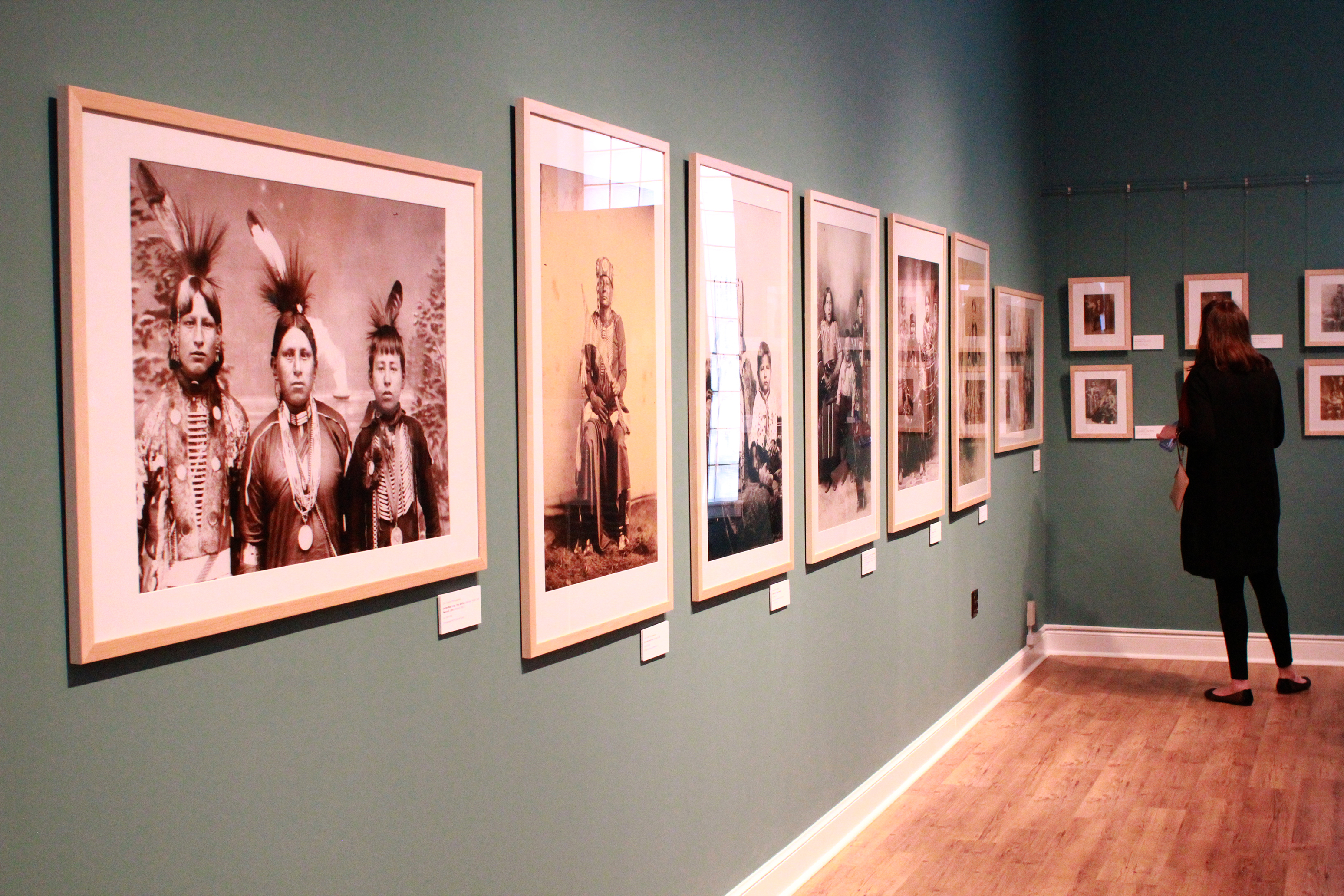 Deborah Yates and her son John HorseChief caught a glimpse of their ancestor as the photo of Hope Coshehe flashed by on a projector screen in the Osage Nation Museum. The photo was of Yates’ grandmother, who was an orphan from Grayhorse who had two sisters. It was a surprise.

“I’m just happy to be here and really enjoy seeing the photographs of family members I recognize. I really like the way they have the pictures matted and hanging, and then I saw a photo of my grandmother,” Yates said. “It makes my heart feel good.”

“Enduring Images: Osage Photographic Portraiture” is the latest exhibit to be featured by the ONM. The exhibit challenges the viewers to make their own interpretations on modern-day Osage portraits with the iconic portraits of Osages from the past. More than 100 Osages and people from the community came to the opening reception at the ONM on the evening of Feb. 23.

Large and small, the photographs are matted and framed and hung on the walls. Digitized photos from the Raymond W. Red Corn Collection were shown in the background on a large projector screen as patrons analyzed and discussed the photos over light refreshments.

Hallie Winter, ONM Curator, said the museum staff chose 13 photos from their extensive collection and scanned them into high resolution images. They then sent the images to a printer in Broken Arrow that produced large prints for the show.

“We really wanted to make an impact with some of the images from our collection and it was very hard choosing and narrowing it down to 13, but I think we’ve chosen a good representation of what we have,” Winter said. “All the rest of the framed photographs in the show are from our permanent collection and they’re all from the late 1800s to the early 1900s. The majority are real photo postcards and we also have some cabinet cards and black and white photos mixed in.”

She said shortly after the photographs were sent to a framer Assistant Principal Chief Raymond Red Corn donated the largest collection of artifacts in the museum’s history. She said they wanted to incorporate the more than 1,100 images he donated into the show so they digitized them all. They also put them in binders for the community to flip through and maybe add information to the images.

The latest renovation to the museum is the installation of LED track lighting to both galleries. Winter said the new lighting is cost effective and doesn’t have harmful UV rays that could damage the objects in their collection. The lights are dimmable and the light can be measured by staff to ensure preservation of photos and other priceless artifacts from light damage.

"Enduring Images: Osage Photographic Portraiture" will be featured at the ONM until Aug. 26. For more information contact the museum at (918) 287-5441 or visit their website at: https://www.osagenation-nsn.gov/museum