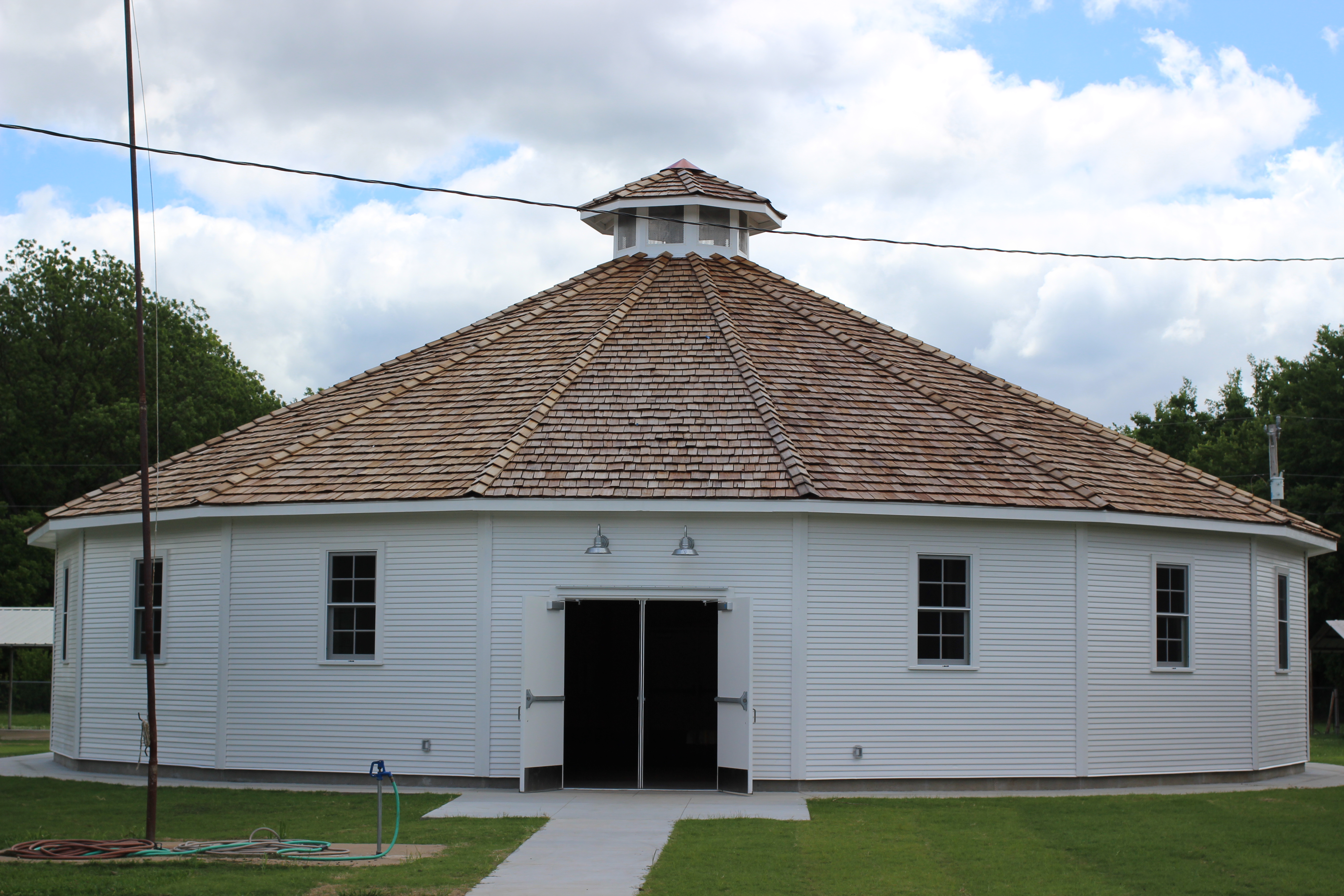 HOMINY INDIAN VILLAGE, Okla. – May 24 marks a new start for the Hominy roundhouse here after Osage Nation officials and Hominy District Osages gathered to celebrate the completion of the structure’s restoration project.

Construction crews spent the early months of 2017 taking apart the longstanding roundhouse and rebuilding it with up-to-date building standards, new doors, concrete sidewalks, windows and a new roof. After hearing from Hominy District Osages, the decision was made to rebuild the roundhouse in its same location between the community building and the dance arbor.

Tribal officials say the decision to keep the roundhouse pays respect to past Osages who practiced and preserved as much of Osage culture as possible, especially in historical tough times of change. At the ribbon-cutting event, Osage officials including Principal Chief Geoffrey Standing Bear, delivered remarks touching on Osage culture and ancestors.

Standing Bear said: “I want to, first of all, recognize our elders, your elders and mine who came to this country from our villages (in present-day Neosho, Coffeyville, Kans., St. Paul, Kans., and Claremore). They come from different directions and they come to this country and we had a hard time, as our families will tell you, we had a lot of grief that comes with loss of family in a hard way, but they kept our traditions as best they could in those times and they all decided we’re going to get what we can and we’re going to take care of each other … I want to recognize their foresight in creating these roundhouses and I want to congratulate the people of the Zon-Zo-Li who maintained longer than the other districts, this roundhouse.”

Years ago, roundhouses were also built in the Pawhuska and Grayhorse villages, but those structures are long gone. The former Hominy roundhouse structure is estimated to be over 100 years old before the restoration project. Historically, the roundhouses were used for social and cultural events including dances.

“When we saw that this roundhouse here was about to go the way of the roundhouses of Pawhuska and Grayhorse, we said this is a good place to start, to halt this loss of our symbols, of our way of life,” Standing Bear said. “So we came in and asked Bruce (Cass, director of the ON Tribal Land Development Office) and his team to do some emergency repairs because it was winter time and the snow was pushing it down and was close to falling … We asked people how much would it cost to restore it and we were able to get good information on that to take it apart and rebuild it as it is, using the wood, using the design exactly and a lot of research went into it.”

Afterward, the Executive Branch worked with the ON Congress, which passed a $410,000 appropriation bill for the restoration project in 2016. A groundbreaking to mark the project’s start was held that December.

Standing Bear also noted his office met with the Hominy Village Committee (Five-Man Board) and a series of community meetings were held to gather input from the community on the roundhouse and future village plans.

Dr. Steven Pratt, Hominy District Head Committeeman, called the day monumental for the “Tsi-Da-Pa (round house)” and said: “We have a new roundhouse, a new building, but for it to be something, it requires people, it requires us as Zon-Zo-Li, as Wah-Zha-Zhi, it requires us to be able to go in there and to maintain what our old folks did,” he said, adding the roundhouse “was the center of everything for us, for our people, we gathered for every occasion.”

Like before the project, the roundhouse interior contains wooden bench seating along the walls with a concrete floor along the sides and the center portion is a pure dirt ground. Newer modern additions include hanging lamp lighting, “EXIT” signs above both double-doors on the east and west sides and fire extinguishers in case of emergencies.

Another new (but old) addition is the village bell, which is now attached to the center of the roundhouse roof. Cass said the bell used to be in the roundhouse before it was moved in front of the community building. The construction contractor for the roundhouse is Tulsa-based Builders Unlimited Inc. and the project architect is Whit Todd of Fritz Baily Architects also in Tulsa, Cass said.

Congressional Speaker Angela Pratt (also Hominy District) said the project and discussions about the roundhouse brought memories of past Hominy elders. She also acknowledged elders, whom she calls advisors, among the nearly 50 event attendees including George Shannon, Joseph “Sonny” Abbott, Belle Wilson and Dudley Whitehorn. “Thank you for being here for us and advising us and continuing to teach us and get onto us when we need it, and so I appreciate that. They’re precious to us, they’re here to guide us into the future and give us a way to show our children to continue on,” she said.

In closing, she said: “I just encourage my generation to be prepared because we are losing our precious family members all the time and so I want to thank the Congress members for supporting this and funding to have this new structure and I echo Uncle Steve’s words of ‘we need to gather and we need to come and be here and have events and happy times together.’”

Jeff Willcox, vice chairman of the Hominy Village Committee, said he’s glad the roundhouse will remain in its spot and noted past uses of the roundhouse. “That roundhouse has been there since I was a young boy and I’m glad to see it restored, it’s been restored I believe twice. It moved once from downtown to down here, I’m just certainly glad that everyone appreciates it … This was something we needed to keep for our people, I’d like to see more celebrations with our Drumkeeper and his family, it’s certainly something we need to use.”