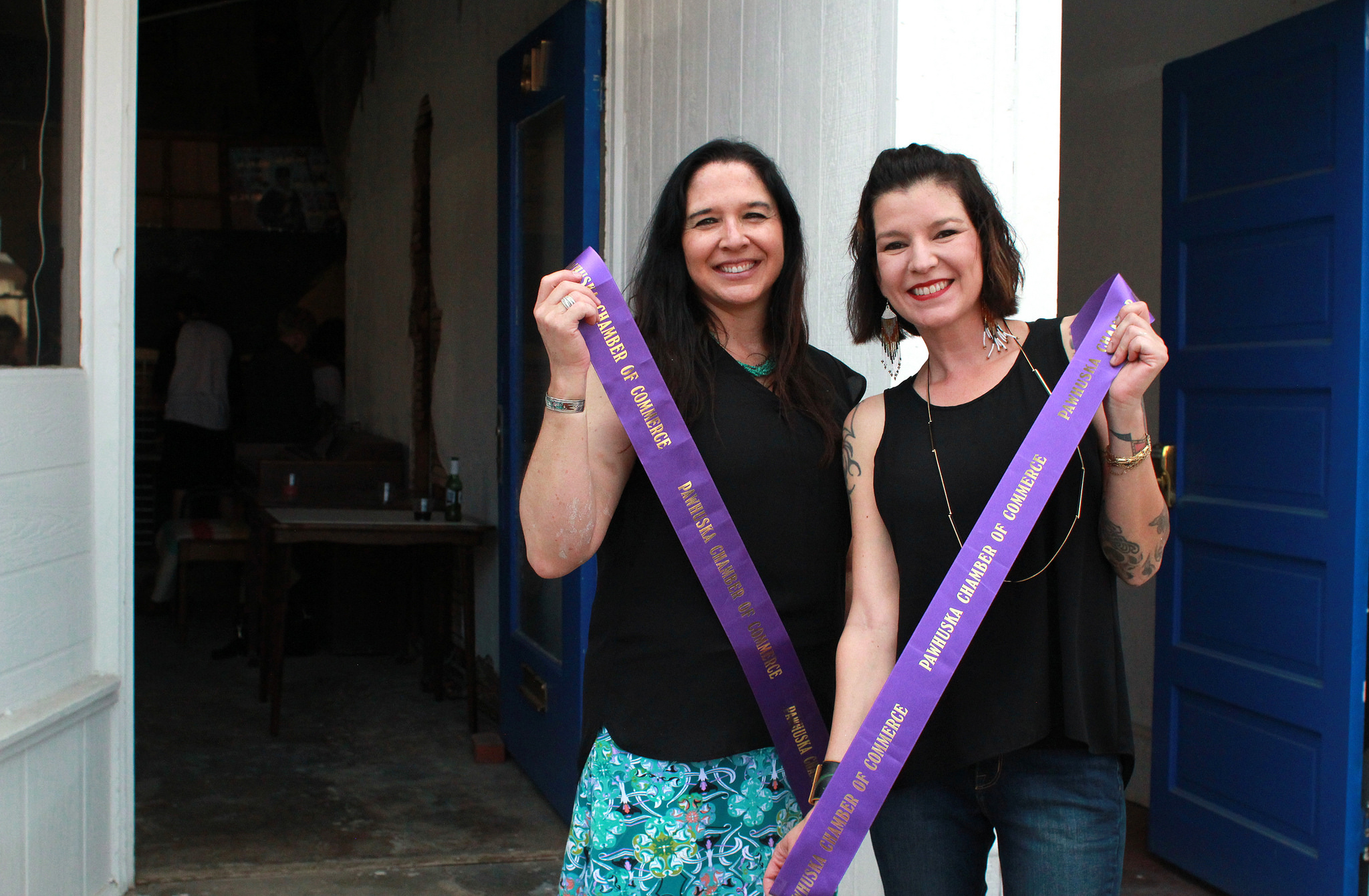 A lot of work, money and dedication goes into renovating a property. Something two Osage friends found out when they bought a building in downtown Pawhuska and decided to renovate the upstairs into a short-term vacation rental called Little Rain Song Loft.

What started out as an idea over dinner with their good friend Rebekah HorseChief, turned into a business venture after Jill Jones and Addie Roanhorse purchased 617 Kihekah on Oct. 13, 2016, and began demolition immediately.

Less than a year later they hosted a Ribbon Cutting and Open House on May 26. Their efforts had turned the second floor of their building into a vacation rental, available for $200 for a minimum stay of two nights, available on the app Airbnb.

“Sometimes when we’re here we get a little bit teary, thinking about all the work we’ve done, knowing what it took, knocking down walls … we’re really proud that we’re a couple of Wah-Zha-Zhi women that took it upon ourselves – because whenever we’re down here working, it’s just the two of us,” Jones said. “It’s not like there’s a bunch of us working in here. We did the work and it’s really exciting.”

The two-bedroom, 1,100-square-foot rental, has a private entrance, kitchen, living room, full bath, dining room, screened-in back porch and private backyard, fire pit and comfortably sleeps six. Roanhorse said she knew it would be a good time to open the property for business because Ree Drummond’s “The Mercantile” draws thousands of visitors every week to Pawhuska and the Little Rain Song Loft sits catty-corner to The Pioneer Woman’s restaurant.

Roanhorse is the daughter of the late famed Osage artist Gina Gray and an up and coming artist in her own right, and Jones has lent her business talents to the Osage Nation Energy Services board and now to the Tallgrass Economic Development, LLC.

The building was built in 1912, just when Pawhuska was beginning to boom. After searching through photos at the Osage County Historical Society, the Pawhuska City Library and other resources, Roanhorse discovered the building was first home to a store called Tailor Hills. It became the Osage Boot Company, then The Hollywood Shop, then it was part of Mrs. Wright’s Dress Shop for many years. Roanhorse said her grandmother, the late Margaret Luttrell Gray, worked at the dress shop for many years.

“When I saw the chance to get into one of these buildings I took it,” she said. “Once we got past the shag 1970s carpet and demoed some walls, we could see a vision of what the building used to originally look like and there’s so much history here. The buildings are just beautiful.”

As far as the first floor, Jones said there is still quite of renovation that needs to happen and they’re investigating a few options on what to do with the space. Roanhorse said they have considered an art gallery, a neighborhood bar, coffee shop and event rental.

The private entrance to the Little Rain Song Loft begins with a blue door at 617 Kihekah. After two flights of stairs the door opens to a small entryway with a full bath on the right. To the left is the living room, with a flat-screen television, single bed, couch, chair and work space. Two bedrooms, one with a King-sized bed and the second with a full-sized bed and single bed, both rooms have closets. Roanhorse’s artwork can be found throughout the apartment.

A large dining room stems from the living room with an 8-place table, ready for guests. A small kitchen follows; it leads out to a screened-in back porch. A new staircase leads down to the backyard where there is a fire pit, benches, patio furniture for guests, and a grill.

“As a downtown property owner myself I just think it’s great,” said Assistant Principal Chief Raymond Red Corn, who was at the Open House on May 26. “The upstairs is fantastic. I was here when they started and it was really rugged, just a really rugged building. They have done it right; they have maintained the character of the original building.”