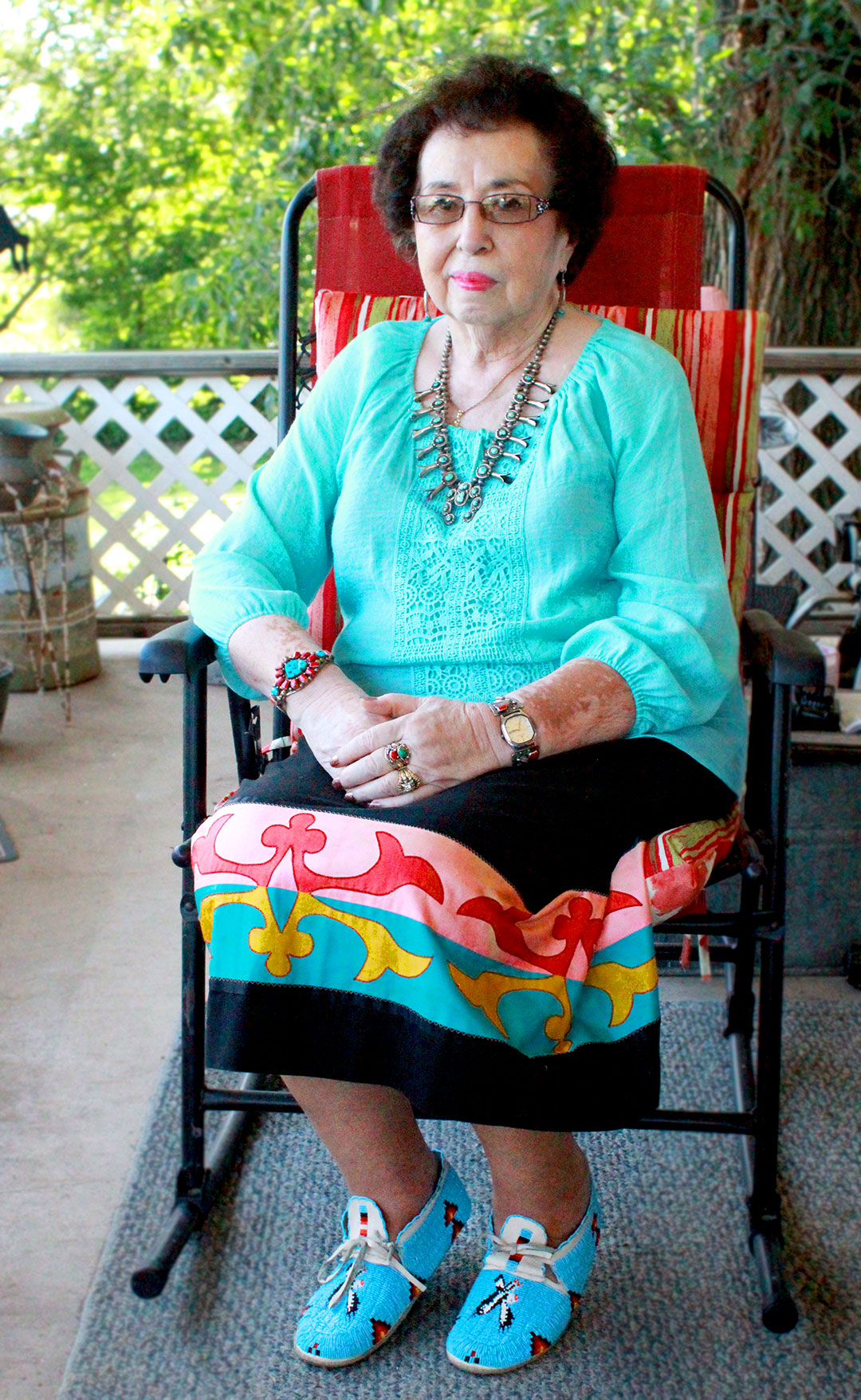 Judith “Judy” Mary Tiger was born on Jan. 15, 1938 in Ponca City, Okla., to Adolfus (Pawnee) and Josephine Henderson Graves, full blood Osage. Her grandparents were Simon and Mary Henderson. Tragically, her mother Josephine died when Judy was six years old, impacting her life forever. She grew up six miles northwest of Fairfax with her dad and siblings. She attended Chilocco Indian School for high school and while there met the love of her life, the late Jim Tiger, who was Creek and Seminole. They were engaged their Junior year and married their Senior year in 1956. While at Chilocco she was the head Clarinet player for the band, she served as president of the Wampum Indian Club and was the Chilocco Indian School Campus Princess. Her husband joined the U.S. Air Force and they had three children, Bruce, Terry and Paula. They settled in Fairfax and began their lives on the ranch, which began their lifelong love for rodeo. Her children were all standout athletes and academics. She is a member of the Grayhorse District and has served as a Committee Cook for the Grayhorse In-Lon-Schka Committee. An accomplished seamstress, she enjoys ribbonwork and used to make all her husband and children’s rodeo shirts and her daughters’ prom dresses. Her Osage name is Mah-Zeh Sah-Ke (Strong Metal) and she is of the Eagle Clan. She is known in the Grayhorse community for her kindness and giving spirit.

Osage News: When did you start dancing at In-Lon-Schka?

Judy Tiger: I remember sitting at the old Roundhouse at Grayhorse. Watching and sitting by the windows – cool air. Went with my grandpa Simon Henderson. He was head of the Native American Church back then. Prayers in Wah-Zha-Zhi I.E. (Osage language) at church dinners and functions. My grandfather also served on the Osage Tribal Council from 1912-1914.

ON: What are the differences in the In-Lon-Schka today from when you were young?

JT: It has grown so much. I love the beauty of the Osage clothing. Our Native youth are coming into the dances earlier. I have several grandchildren participating, nieces, nephews. I notice a lot of camps at Grayhorse.

JT: I enjoy watching the dancers, looking at the beautiful clothing, my grandchildren dance and this year my great-grandson Tiger McKinley, age 4, was roached.

JT: The In-Lon-Schka dances have grown, I’ve seen growth. Casinos, health care facilities, the Osage language has evolved to something positive. We are not losing it; we have great teachers, programs, WELA, culture classes, ribbonwork, weaving.

JT: Mary Fish would be considered a hero to me, she invited me to a church camp meeting in 1984 – I received the holy spirit and a life change. Oral Roberts, Kenneth Hagen, Kenneth Copeland, Thunder Basketball, Guilherme Marchi, Mike Lee and J.B. Mauney.

JT: My marriage to my husband of 55 years, Jim Tiger, and the birth of my three children, Bruce, Terry and Paula, my eight grandchildren and 18 great-grandchildren. We were married in 1956 and I became an Air Force wife. I met my husband at Chilocco Indian School and those were some of the best times. I also just returned from my Chilocco High School reunion. I got to see some of my best friends who are still living.

JT: Watching movies at the Tall Chief Theatre in Fairfax with my best friends Alice Couch, Charlene Bear and the Goad sisters. You could see a movie, buy candy, popcorn and a pop for 25 cents.

JT: Family, athletics, rodeo, children, grandchildren. My son Bruce was a championship rodeo rider and went to college on a rodeo scholarship. My daughter Terry excelled academically at Northern Oklahoma College and worked for the Indian Health Service for over 30 years. My daughter Paula held the state record for the mile in Track and Field for over 30 years. In high school, she was State Champion seven times. She attended Oklahoma State University on a track scholarship and she has coached at Woodland Public Schools for many years.

JT: Right now. We have a really good time at the new Osage Senior Center in Fairfax, great fellowship. We are a small family who truly loves and cares for one another.

JT: The most recent event – seeing President Trump as our new president. He will have a great impact for our nation.

JT: I would have studied my Bible and got in The Word earlier. I studied the Bible and received the Holy Spirit at age 45, I did this grand change in my life. I had a Water Baptism at age 10, with Alice Couch and Frances Goad at the Baptist Church.

ON: Is there anything else you would like to add?

JT: My mother died when I was 6, and I didn’t really know … it was a hard life living without your mother; so, when I had my kids I would not let anyone take care of my kids, but me. I wanted to be the first to hear them talk, see them walk, that was just me because I grew up without a mother. My kids thank me for having three meals a day, having cookies made for them after school, always being there to listen to their stories. We always had the best conversations after school. I loved being a mother.