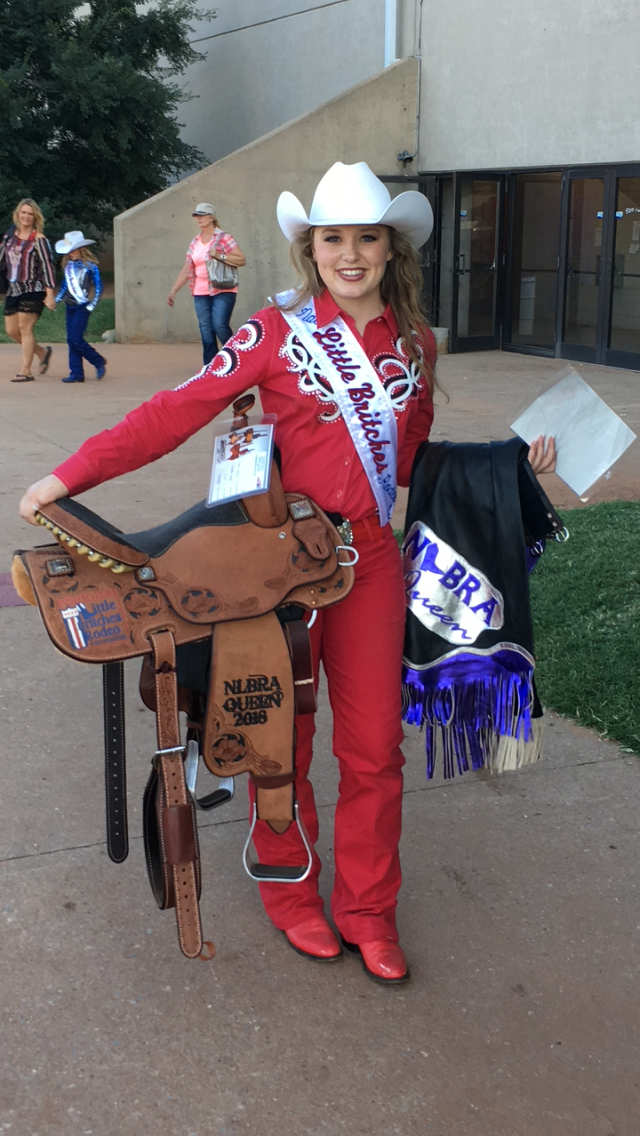 Shiloh Martin’s dream was to be the National Little Britches Rodeo Association Queen. That became a reality after hard work, much practice and determination.

As Queen for the NLBRA, she will be traveling all over the United States representing the organization at events. She will have the responsibility to speak to the next generation about her platform and the sport of rodeo. She will be traveling to Colorado Springs, Dodge City, Denver, Dallas and Houston as well as Las Vegas and Cheyenne, Wyo.

The competition was held July 2-9 at the Dominion House and the Lazy E Arena in Guthrie, Okla. Her age category was 14-18 years of age and she competed against girls from Colorado, Mississippi, Arkansas and Nevada. She won a saddle, scholarships and she will write a blog for the NLBRA website about her adventures.

Martin, 16, is from Burbank, Okla., and said she has been on the back of a horse since she was born. Her father is a cowboy and a Farrier, a specialist in equine hoof care.

She has competed in rodeos since she was three years old. She competes in goat tying, team roping, breakaway roping, barrel racing, pole bending and speed trail. She said she learned to embrace her rodeo lifestyle and loves it.

Martin is home schooled, which gives her the freedom to plan school around her busy life and not around a school year. She said she often spends time doing her homework in her parent’s truck on the way to rodeos and other events. She carries a 3.8 grade point average and her grades have helped her secure scholarships with various rodeo associations for college.

She said that her most defining experience was when she competed for the National Little Britches Rodeo Association Queen in 2016, but fell short. She had put her heart out on the line for the title and came back home with first runner up. She said she was completely devastated thinking that she let people down who have supported her through the years.

She decided to run for the title again, this time for 2017-2018 Queen and won. Martin said she could not have gotten where she is without the love and support of her parents and board members from Team Oklahoma. They believe in her and encourage her to reach for her dreams and push her to do so.

"It was surreal for the first three days. It was always my dream and for it to come true … it is like getting your dream job and I hope I can do everything to the best of my abilities," she said.

The National Little Britches Pageant is not for the weak of heart. The contest is a nine-day event that consists of hours of studying rodeo rules and learning correct rodeo terminology, competing in categories such as horsemanship, working cow horses, giving a speech, modeling, personality, appearance, photography and a written test.

She said that as NLBRA royalty, one is expected to be able to ride any horse a stock contractor may put them on. To prepare she rode many horses from different barns and arenas to get a feel for anything that may come her way during the pageant. She said she studied the rules and terminology for hours, burning it into memory.

Her father was excited to hear if she won.

“I was not sure if she had the crown yet until they announced her name,” said her father James Martin. “Then I felt a warm excitement and surprise. I got the camera up to capture her surprise.”

Her platform for the pageant was "Fall seven times, rise eight." She said her platform means “Whatever your goals stay stubborn about them, keep determined to reach them and don't let hard times or a bump in the road deter you or get you down, and you will be able to bounce back three times stronger.”

She is the daughter of Jay and Stephanie Martin of Burbank, and the granddaughter of Donnis Cannon, a direct descendent of Alex Cannon (Osage), Pah-Pah-ah-hah. They are from the Grayhose District and Eagle Clan.

"I am so excited to share my passion; always to keep trying and moving forward," she said. "I feel like there are a lot of kids who have big dreams and ambitions and if being a rodeo queen is your dream or goal you have to pursue it wholeheartedly!"