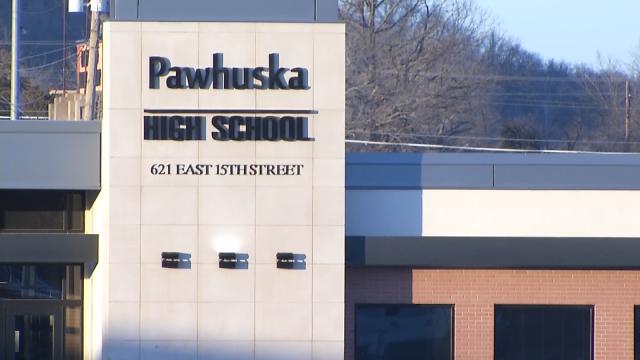 The Osage Minerals Council, with the financial assistance from the Oklahoma Office of Emergency Management, has already plugged one of two seeping natural gas wells that have halted the start of the school year for the Pawhuska school district, and they are working on the second.

The first gas well plugged was located on the softball athletic field, according to a press release from Dr. Janet Neufeld, Superintendent for Pawhuska Public Schools.

“Many tribal, state, and federal agencies, with extensive expertise, have worked relentlessly to discover the origin of the gas purge and its potential effect on the campus of Pawhuska High School,” Neufeld said in the release. “The Oklahoma Water Resources Board has taken the lead in the investigation of this situation. An active work group of tribal, state, and federal officials convenes daily to determine the court of discussion and action.”

According to the release, the air monitoring levels continue to be below EPA screening levels for hazardous chemicals and the school buildings and surrounding areas are being monitored by the State Fire Marshal Terry Ferrel. On Aug. 23 he released a statement that said, “According to the EPA there is not a current air quality hazard at the high school. Please be advised that the high school can be inhabited at your pleasure.”

According to the Pawhuska Public School’s Facebook page, classes will begin on Aug. 28. According to the release, the EPA conducted air sampling and all levels were below EPA screening levels for hazardous chemicals as of Aug. 23 and real-time air monitoring in the building and surrounding areas to the school will be monitored by the State Fire Marshall.

OMC Chairman Everett Waller said the OMC is doing everything possible to ensure the safety of children attending Pawhuska schools and they will get the wells plugged.

“We need to lay down the politics and deal with this, the safety of the children comes first,” he said. “I have two nieces that go to that school.”

The politics he speaks of pertain to who has jurisdiction to plug the wells and who is paying for it.

In a proposed agreement between the State of Oklahoma and the Osage Nation, hand delivered to Principal Chief Geoffrey Standing Bear’s office on Aug. 22, Gov. Mary Fallin and the Oklahoma Corporation Commission (OCC) are requesting the Nation’s consent to receive monetary assistance in the plugging of the wells from the Corporation Commission Gas Seep Fund in the amount of $50,000.

The proposed agreement has already been signed by both Gov. Mary Fallin and Tim Rhodes, director of administration for OCC. However, the proposed agreement asks for the Nation to give up its jurisdiction over the wells and consent to the jurisdiction of the State of Oklahoma and the OCC. Fallin declared the situation a serious threat to the environment, public health and safety and the OCC has stepped in.

In an email dated Aug. 23 from Standing Bear’s Chief Executive Advisor Sheryl Decker to Osage and BIA officials, she wrote: “Chief Standing Bear has said he looks forward to signing an agreement which conforms to our Osage Constitution and Laws. He asks where the Osage Minerals Council and Bureau of Indian Affairs stand on this issue. As we all know, all Osage minerals matters are under the jurisdiction of the Osage Nation and the federal government with critical roles for our Osage Minerals Council and the Bureau of Indian Affairs.”

Standing Bear said “this is a minerals matter” and that the proposed agreement had a clause about the laws of the state to apply, which would require the consent of the Osage Congress along with the ON Attorney General’s Office.

The Osage Congress meets for a special session at 10 a.m. on Friday, Aug. 25, at the Osage Congressional Chambers on the ON Campus in Pawhuska. Second Speaker of the Congress Alice Buffalohead has filed a resolution, ONCR 17-32, “to support and authorize the execution of an intergovernmental agreement between the Osage Nation and the State of Oklahoma for the Oklahoma Corporation Commission to repair a dangerous natural gas seep at Pawhuska High School and to provide monetary assistance; and to authorize a limited waiver of sovereign immunity.”

Waller said he would have more information on Friday as to the status of the well plugging.

To listen to the Osage Congressional special session on Aug. 25, visit the Osage Nation’s website and listen to the live broadcast at 10 a.m. at https://www.osagenation-nsn.gov/multimedia/live-media

[Editor's Note: This article was updated to reflect a news release issued on Aug. 23 from Pawhuska Public Schools.]