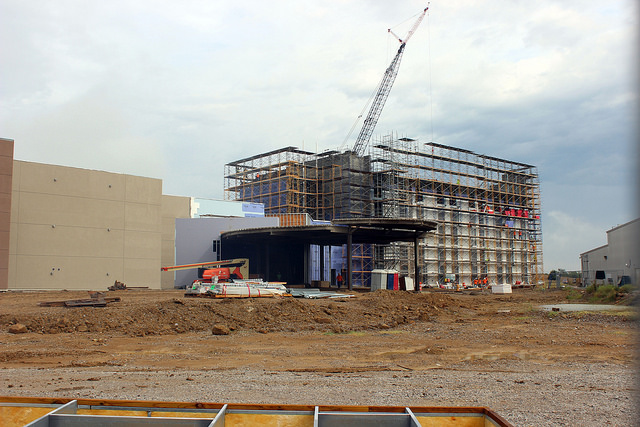 TULSA, Okla. – A celebration of progress took place as Osage Casino officials hosted a Sept. 18 “topping off ceremony” for the final beam to be installed on the $150 million Tulsa casino and hotel project still under construction.

Osage Nation government officials and dignitaries along with Tulsa area officials came together to celebrate the occasion in front of the construction project next to the current Osage Casino, which opened in 2005 along 36th Street North just west of the Osage County line. Casino and local officials applauded the casino and hotel project, which has been the largest project undertaken by the ON Gaming Enterprise.

The Tulsa casino is the largest of the seven Osage Casinos and is billed as the Nation’s flagship casino, which brings in the most revenue to fund ON government services and the casino operations.

“This is a very special day for the Osage Casinos and the Osage people,” said Osage Casino CEO Byron Bighorse. “The progress of the construction on the Osage Casino and Hotel is exciting … we are thrilled with the development so far and the possibilities this casino will bring.”

Principal Chief Geoffrey Standing Bear said the new casino and hotel will “positively impact Tulsa and the surrounding areas and will contribute to the economic growth of our Nation.”

The casino will stretch over 240,000 square feet and the hotel is 75,000 square-feet, according to casino officials. The hotel room count has increased to 141 rooms from an earlier reported 126 rooms. The hotel tower will also comprise six suites and four hospitality suites along with a fitness center and resort-style pool.

On the casino floor, there will be 16 table games, 1,550 electronic gaming machines and five poker tables. Amenities will include a sports bar and grill, a café and a brewery with a pub. The property will feature a 10,000-square-foot ballroom and three breakout rooms for conferences and special events along with a 25,000-square-foot multi-purpose-use space.

Tulsa Mayor G.T. Bynum attended the event and applauded the project, which he said will bring 435 jobs to the area economy and $32 million in wages and salaries for the Tulsa area.

At the close of the ceremony, those officials in attendance were invited to sign the final white-colored beam. Afterward, a crane hoisted the beam to the top of the hotel tower for installation. Tulsa-based Crossland Construction Company is the contractor for the project and its officials led the attendees on a tour of the project and its catering service provided lunch for the mingling attendees.

Osage Casino Chief Operations Officer Joe Cooper said construction progress is still on schedule and the Tulsa casino and hotel will open in either July or August of 2018.