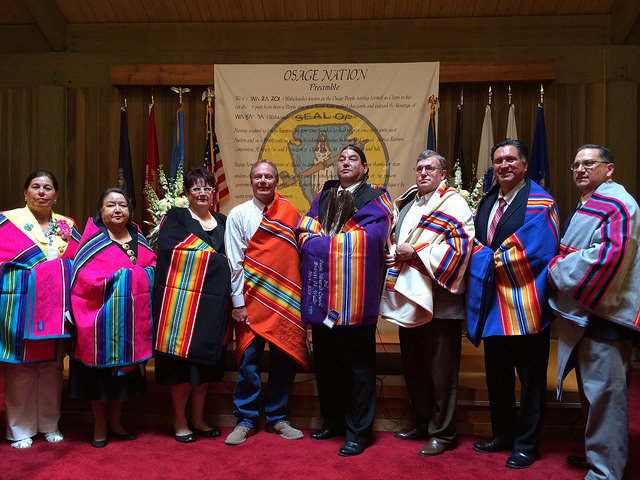 According to the resolution, sponsored by Councilwoman Stephanie Erwin and based in part on the legal opinion of Fredericks Peebles & Morgan LLP, Erwin alleges that the mineral estate belongs to Osage headright holders and not the Osage Nation. She said when the 2006 Osage Nation Constitution was ratified, it was in violation of the 1906 Osage Allotment Act.

Erwin said during a Sept. 20 council meeting an “unconstitutional taking” of the mineral estate took place from the headright holders when the new government was formed. She alleged the 31st Osage Tribal Council acted outside of their authority, that the property rights of the headright holders have been violated and that it was also a violation of the Indian Civil Rights Act of 1968.

“Because of this I think we need to go in and have our attorney file for breach of trust to get your property back, it’s your property,” she said to headright holders. “At no time were you ever paid for it. We still live in the United States of America. You cannot take something away from somebody they have paid for without paying for it ... We need to get this clarified and the only way we can do that is to file for a breach of trust.”

In 2004, the U.S. Congress enacted Public Law 108-431, 118 Stat. 2609, which reaffirmed the sovereign right of the Osage people to reform its own government. In 2006, the Constitution was signed and the government was reformed, doing away with the Tribal Council and giving all Osages a right to membership and a right to vote.

The minerals council is an “independent agency within the Osage Nation” responsible for managing the mineral estate in accordance with the 1906 Allotment Act, according to the Constitution.

In 2016, members of the council believed they did not have to adhere to Osage law. The case, Cynthia Boone, Everett Waller, Kathryn Red Corn, Joseph Cheshewalla and Stephanie Erwin, Duly Elected Minerals Council Members v. Osage Nation of Oklahoma, went before the Osage Nation Supreme Court. The court ruled that the minerals council is subject to the laws of the Nation.

“I am not against the Constitution,” Erwin said during the Sept. 20 meeting. “I am against the Osage Mineral Estate belonging to the Nation. It belongs to the annuitants, bought and paid for, their families did. And I don’t know anybody who was paid for it.”

Seconding Erwin was Councilwoman Cynthia Boone, who has sat on the minerals council since 2006 and has been vocal about her opinion of the Constitution. She said if the lawsuit were to be successful and the outcome meant the dissolution of the Osage government, that was fine with her.

“It is a well-known fact that I am a big supporter of the 1906 Act ... I was here in 1995 when an Osage government fell,” Boone said of the former National Council.

Voicing his dissent was Councilman Galen Crum, who said to sue the Nation was a waste of time and money because the minerals council did not have the standing to bring the case. He also said it could be viewed as the council breaking their oaths of office, which is to always uphold the Constitution.

“I think this is an Osage problem and we need to fix it,” Crum said. “If we go to the federal government, we’re just going to be throwing our money down the rabbit hole.”

Principal Chief Geoffrey Standing Bear said he is meeting with the Nation’s Attorney General’s Office about the case. He said the question of who the minerals estate belongs to has already been decided in two previous federal cases. The first was the Jech case, in which the Interior Board of Indian Appeals ruled the plaintiffs in the case did not have the standing to file suit against the Nation. The second case was the 2011 settlement agreement of the Highest Posted Price case. According to terms of the settlement, the Nation agreed they could no longer sue for anything related to the mineral estate.

“As a headright owner, and Assistant Chief is also a headright owner, we both believe this is total nonsense. I talked to members of the minerals council and I told them I’m against having two tribes because that’s what they’re asking for. Separate federal recognition,” Standing Bear said. “We have not interfered with the mineral estate, why would we? We’re shareholders.

“Two tribes. Are you kidding me?”