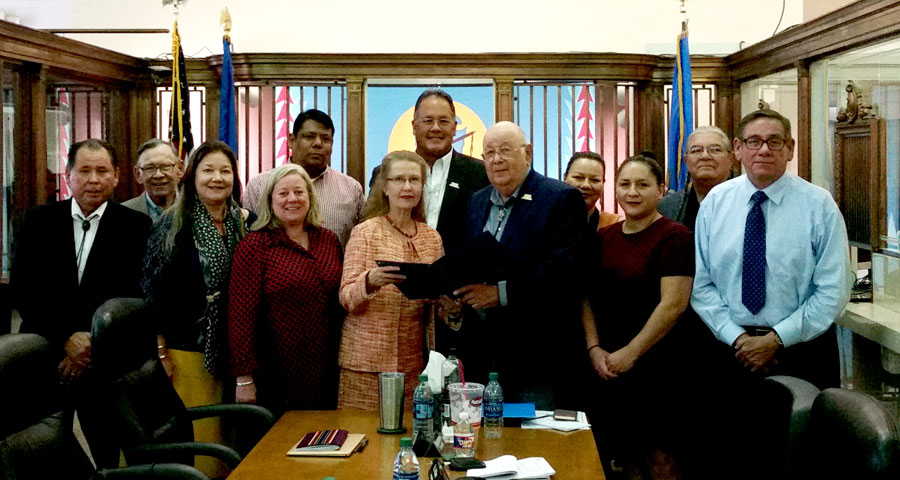 The Fifth Osage Nation Congress honored the late Annette Moncravie Gore on Sept. 26 and presented a citation to her daughter, which honors Gore for her years of research work in Osage genealogy.

Gore’s genealogy research is housed in the Annette Gore Library, located at the Wah-Zha-Zhi Cultural Center in Pawhuska. Gore passed away at the age of 101 on May 17, 2017 in Aurora, Colo., where she resided with surviving daughter Tina Allen, according to her obituary.

Congressman William “Kugee” Supernaw acknowledged Allen, who was attending the session, and she accepted the citation in front of the applauding Congress members present. Supernaw said Gore “spent a lifetime of research on history and genealogy of the Osage people.”

“(Gore) donated her library to the Osage Nation,” Supernaw said. “At this time, I would like to issue a citation of commendation acknowledging her contributions to the Osage people.”

Reading the citation of commendation, Supernaw said Gore published three volumes of genealogy charts containing information on Osages listed on the roll of the 1906 Act. Supernaw said Gore’s late parents are Sylvester Alexander Moncravie and Myrtle Clementine Baker Moncravie who are both original allottees on the 1906 roll.

Gore previously received honors for 40 years of research work when the Annette Gore Library was dedicated in September 2005, Supernaw said adding the Congress now extends the citation of commendation to Allen who then addressed the Congress.

“She sincerely was interested in the Osages. I remember mother said it’s the most wonderful thing you could ever be is an Osage,” she said. “I was very proud of my mother in the initial ceremony, she was not a public speaker to my knowledge, but she got right up there and she shared everything she could about genealogy … She was a delight, she was a sweetheart, it was an honor and privilege to have her as my mother and for her to have lived in my care as long as she did and I love her dearly and I always will and I miss her and I thank you so kindly for allowing me to have this citation.”

A reception was held later in the afternoon at the Wah-Zha-Zhi Cultural Center now located at 220 W. Main Street next to the ON Language Department. The mission statement of the Annette Gore Library states: “Our mission is to be the central repository for the evolving history of the Osage Nation and also to support the personal, educational, cultural and professional needs of the community.” The library can be reached at (918) 287-5580 and its website is at: www.osagenation-nsn.gov/what-we-do/annette-gore-library