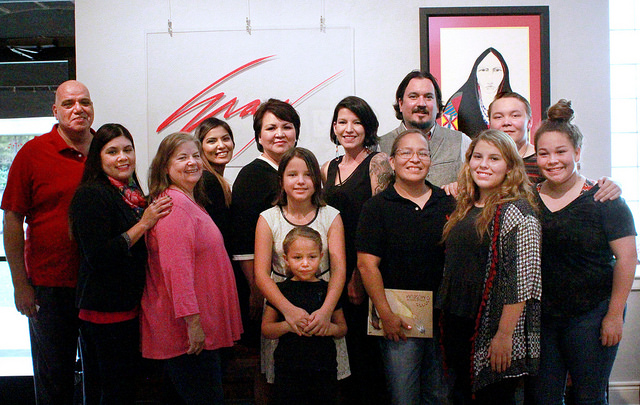 The Osage Nation Museum’s latest artist retrospective showcases the work of the late Osage artist Gina Gray. Gray broke barriers in Indigenous art and was known for her contemporary take on traditional and cultural styles.

The retrospective, titled “Traditional Values/Contemporary Vision; works by Gina Gray,” will be showcased at the ONM till March 31, 2018. ONM Curator Hallie Winter said the exhibition was a cumulative endeavor, incorporating the permanent collection of the ONM and private collectors of Gray’s work. About 80 percent of the retrospective is loaned from private collectors.

“It’s been emotional. I saw the show yesterday for the first time and it took my breath away, for sure. It’s very overwhelming,” said Addie Roanhorse, Gray’s daughter, who is also an artist. “[My mom] would be over the moon right now, just beaming with Osage pride – she wouldn’t have been able to get in the door.”

Roanhorse said she helped with calling the collectors for the ONM and getting the collection together for the show. She also collaborated with Winter and Jennifer Tiger for an exhibit book that accompanies the show. Roanhorse and Tiger, who works at Wah-Zha-Zhi Cultural Center and is working toward her BFA in Photography from the San Francisco Art Institute, did the photography for the book. Essays for the book were written by Gray’s brother Louis Gray, her son Dante Biss-Grayson and her cousin Anita Fields, who is also a renowned Osage artist.

There are over 60 pieces of artwork in the show, 46 of them loaned, including two coats she painted, Christmas ornaments, a small painted teepee, book covers used by the National Congress of the American Indians and for Morley Swingle’s “Bootheel Man.” The mediums used for the work include acrylic on canvas, graphite, and watercolor, monotype, acrylic on glass, acrylic on fiber paper and varnish, decoupage, oil on canvas, watercolor, ink on canvas, ink on denim, graphite, and pastel, pastel on paper and more.

As soon as the ONM put out a call to the community for Gina Gray’s work, the response was overwhelming, Winter said.

“People from across the United States contacted us about the exhibit and wanted to know how they could be a part of it,” Winter said. “We are very grateful for the generosity of the 23 lenders. Without these individuals, this exhibition could not be possible.”

Gray was educated at the Institute of American Indian Arts in Santa Fe, N.M., and the California Institute of Arts, where she studied commercial art. Famous for her monotypes and watercolors, Gray once said, “I was told years ago that you couldn’t do that – you couldn’t have pencil and watercolor in the same painting. I wanted to prove that wrong. I love to experiment. And these works were an instant hit. I couldn’t make them fast enough.”

Biss-Grayson, who is also an artist and resides in Santa Fe, called his mother’s show “Excellent.”

“It brought about all the timeline, the chapters, different styles my mom had. It was also good to see not just the permanent collection, but private collections and some of those works were unique,” Biss-Grayson said. “The teepee one, that my uncle Louis (Gray) has, is definitely one of the masterpieces that she did.”

Biss-Grayson, whose stepdad was renowned artist Earl Biss, said Biss and his mother were both his mentors.

“Earl was more of the romantic impressionistic style and mom was more modernistic contemporary style,” he said. “So, some of her usage of color, solid versus the more emotional expression, both of those I think I pulled out for my own artwork as well.”

Gray won many awards throughout her career. She won the prestigious Southwest American Indian Art Association’s 70th Annual Santa Fe Indian Market Fellowship Award. She was also a Native American Right’s activist and in 1973 spent a month at the occupation of Wounded Knee on the Pine Ridge reservation. She passed away Dec. 20, 2014.

“This is just a fraction of what she produced,” Roanhorse said. “Even the piece on the clipboard, that’s a piece that I own and that was her last piece, she was still working on that right before she passed away.

“She was refined throughout, in my opinion. She definitely went through different styles and mediums, but her consistency has always been there.”

The exhibition catalogue will be available for the suggested donation of $20. All proceeds from the catalogue will go to the Osage Nation Museum to help in fulfilling their mission of educating the public on Osage art, history, and culture.

For more information on the Gina Gray exhibition, please call or email Hallie Winter at (918) 287-5441 or hwinter@osagenation-nsn.gov.

[Editor's Note: This article was corrected on Oct. 4, 2017, to reflect the lenders and collaborators for the retrospective.]