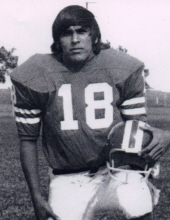 Cowboy was born January 4, 1955, in Hominy. He was the son of Wilson Elbert and Marjelen Olita (Whitehorn) Mitts. Cowboy began attending school at Middle Enterprise. Following the completion of third grade, he began attending school in Hominy, later graduating with the Class of 1973. Following high school Cowboy attended Northwestern Oklahoma State University. After he completed his education Cowboy returned to the Hominy area and began working in the oil fields. He later started working with Local 798 Pipeliners Union. Cowboy worked as a welder’s helper until 2013 when he retired.

Cowboy loved football and was an avid supporter of Hominy Buck Football. He was also a member of the Hominy Buck team that played for the state championship in 1972. Cowboy enjoyed going to the Indian Dances yearly, since he was four years old, as well as participating in them annually. Roping events was a love of his as well as just going to watch. Cowboy loved going to Memphis, which always resulted in a visit to Graceland. Cowboy was a big fan of Elvis and Joe Namath. Visiting with friends and reminiscing was always what Cowboy enjoyed.

Services will begin at 9 a.m. Monday, October 23, 2017, followed by church services at 10 a.m. at the Friends Church in Hominy. Burial will be in the A.J. Powell Memorial Cemetery. Friends may share a memory with the family at the home or online at www.chapman-black.com.