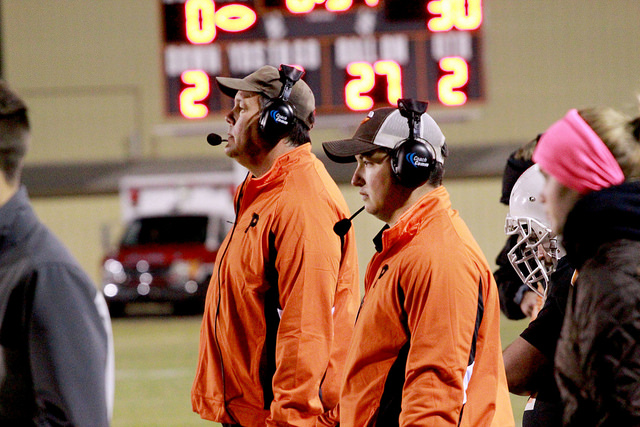 It’s been a tough couple of years for the Huskies, with this year’s season nearing its end 0-9.

“It was my first season to try and coach at this level,” Powell said, who joined the team as Offensive Coordinator. “I didn’t know what was going to come.”

He’s been on the job for the past four to five weeks, thanks to Head Coach Joe Tillman, who is also an Osage Nation Congressman. Tillman said he knows Powell’s family and followed his football career when he played for Pawhuska High School and thinks he is an outstanding young leader in the community.

“It just made sense for me to ask Hank. He knows the school, he knows the community and they know him. I think he’s done a fantastic job just in the short amount of time he’s worked with the team,” he said. “I hope he gets to stay on at this capacity. He’s young and I think he would be a great asset to the team.”

Powell, 26 and an Osage tribal member, said in the weeks he’s worked with the team he has vastly enjoyed it and hopes to keep coaching in the future. When asked about what he thinks of the Huskies’ season and the players he works with, he said they don’t quit.

“Well, [a losing season] wasn’t what anybody wanted, but we’ve gotten more out of it than just wins and losses,” Powell said. “They never quit, they’re resilient and they just keep plugging away.”

The Huskies face off against Perry (3-6), at Perry, for their final game of the season tonight. Kickoff is at 7 p.m.