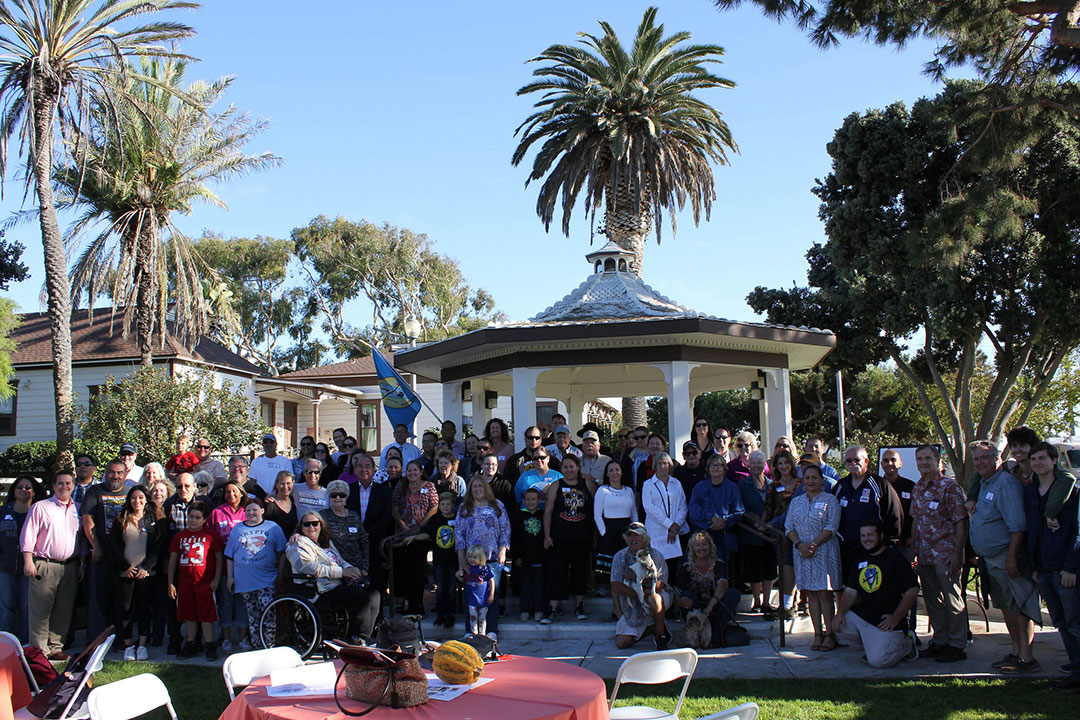 CARLSBAD, Calif. – Scores of Osages and their families returned here to network and visit with Osage Nation officials during the United Osages of Southern California fall gathering held Nov. 4.

The UOSC dates back to the 1940s and serves as an opportunity for California Osage constituents and Osages from nearby states to connect in fellowship and hear presentations from tribal officials visiting from Oklahoma. The fall gathering drew Osages and their families from both the San Diego and Los Angeles metropolitan areas to hear discussions on Osage government affairs and culture.

UOSC Chairman Greg Clavier estimated over 125 attendees at Carlsbad’s Magee Park, which is one block away from the Pacific Ocean and about 80 of those people are Osage, according to his registration count.

“The number of participants at UOSC seems to be growing, I believe this is a result of our outreach to Southern California Osages,” Clavier said. The nonprofit UOSC is also on Facebook and past UOSC Chairman Bill Myers previously noted whenever one UOSC participant speaks to another Osage, that person is also speaking to six others in communicating about the tribe.

The day’s gathering also returned to familiar grounds for those who’ve attended UOSC gatherings in past years. The event was held on grassy parkland in front of Heritage Hall, which served as a UOSC meeting venue in past years. Since then, UOSC gathering attendance increased, calling for the event to be held outside or in other buildings.

“We decided to hold the UOSC Fall Gathering at Magee Park to change up the venue from the Senior Center to have a less formal environment and to revisit a location that was part of the past of the UOSC,” Clavier said. “When my parents (Galen and Rachel Clavier) ran the organization in the past, we held annual UOSC picnics at this location, this goes back to the early 1980s.”

In addition to ON government officials speaking, the event also featured presentations and displays by Wah-Zha-Zhi Cultural Center employees John Horsechief and Jennifer Tiger. Both discussed the significance of Osage men and women’s dance clothing, which was on display as part of the Osage cultural trunks exhibits presented at special events.

Also, Los Angeles area resident Danielle Glenn-Rivera informed attendees of a recently established Native American Studies minor program at the University of Southern California also in Los Angeles. “The coordinator has been going out to the reservations and to Riverside (Calif.) Sherman Indian High School and recruiting American Indian students,” Glenn-Rivera said in encouraging people to contact the director for Native American students recruitment and outreach at USC if interested in attending the school.

The attendees heard a presentation by Tribal STAR, which is a San Diego State University School of Social Work-affiliated program geared toward helping train social workers to become familiar with the Indian Child Welfare Act and resources for Native American children in child welfare cases. Tom Lidot, Tribal STAR program manager, said “our training is to make sure every state and county social worker knows about the Indian Child Welfare Act because we do encounter bias throughout California in folks that don’t like Indians and they don’t want to follow the law … If you encounter a social worker who is not following the law and protecting the child’s connection to the tribe, you ask for their supervisor, what is the name of their supervisor?” Lidot said. “STAR” is an acronym for Successful Transitions for Adult Readiness,” he added.

Lidot also said his program is looking for “families who can serve as emergency placements, we are looking for families for the adoption of Indian children that are at risk and for permanency and guardianship.” Lidot said Tribal STAR provides training to child welfare social workers, court personnel, attorneys, judges and ICWA advocates in five Southern California counties and its website is located at www.theacademy.sdsu.edu/programs/tribal-star/

Gathering attendees including Sharon Drum Giering, who praised the event afterward on Facebook with comments such as: “Such a wonderful day spent with family and friends. Love it.”

Clavier said the UOSC will hold its Spring 2018 Gathering on Saturday, April 21, at the Carlsbad Senior Center where previous gatherings were held. The venue is indoors and the gathering will feature a candidates’ forum for Osages interested in seeking office in the 2018 ON elections.