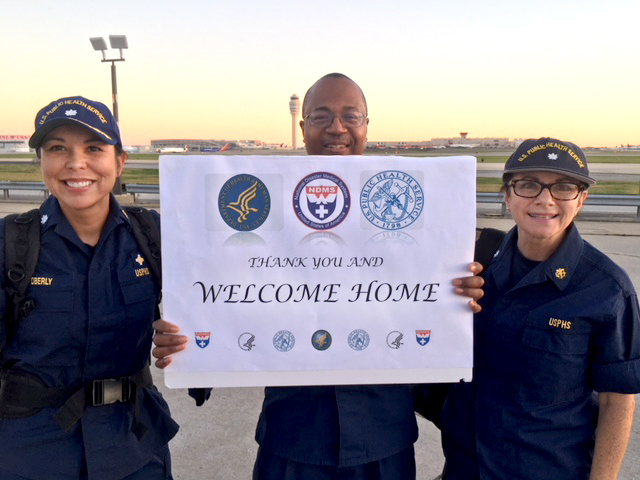 Hurricane Maria made landfall in Puerto Rico on Sept. 20, 2017. As a result of the Category 5 hurricane’s devastating impact on Puerto Rico, the United States Public Health Service was activated.

In the next week, Coqui-1 Team members established an FMS on the southern side of the island in the city of Ponce. The team developed a local plan, process and staffing schedule for the 250 bed Ponce FMS which included inpatient services, an acute care area, a ventilator room, an isolation area and a pharmacy. To maintain the FMS and provide direct patient care, USPHS partnered with Non-Governmental Organizations, Disaster Medical Assistance Teams, the Drug Enforcement Agency, the National Guard, the Puerto Rico State Guard and the Puerto Rico Department of Health.

The U.S. Navy and Army also assisted the FMS for a common mission of patient care. At the time, Puerto Rico was experiencing a shortage of oxygen for ventilator dependent patients. The U.S. Navy assisted by delivering filled oxygen canisters from the USS Comfort to the Ponce FMS. The Army also assisted by providing helicopter transportation for a patient requiring a higher level of care. Under the care of a PHS Physician Assistant, the patient was transferred to the USS Comfort via helicopter with the help of Army pilots and National Guard medics.

Located atop the beautiful mountains, Bo. Rancheras was a small, rural community in need of water, food and medical assistance. Notice of the event was spread via radio advertisements and word of mouth. When the team arrived at the small outdoor basketball court (site of the event), over 300 community members were happily waiting and greeting the team with music, smiles and words of appreciation. Led by Col. Polanco, PR State Guard, the PHS Officers worked in triage, medical services, pharmacy and public information. Beginning shortly before noon, the clinic provided acute care services to 186 people in three hours. After everyone was seen and/or treated, FEMA distributed cases of water and food bundles to each family in the community.

As a show of thanks to the team, a few cooks prepared a local meal called funche, a porridge like meal made of corn meal, cod liver oil, garlic and salt. Col. Polanco stated that this event was the largest one yet and the most successful, thanks to the advance notice and all involved agency partners. Every day successes in Puerto Rico were the result of interagency collaboration for the common goal of restoring and promoting the health of the Puerto Rican people.

All officers returned home at the end of October and early November. Though their experiences were different, a common takeaway was the deep connection to the people of Puerto Rico and an unwavering commitment to serve when and wherever needed.